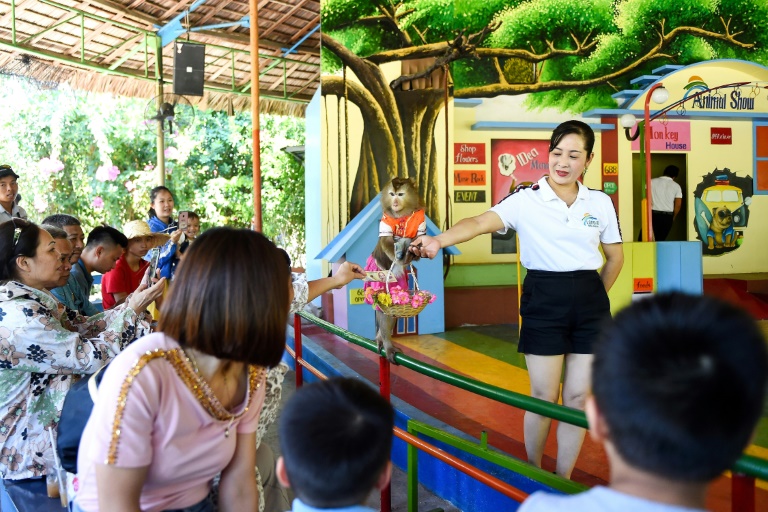 Monkey Island in Nha Trang city is one of the countless animal tourism sites across Vietnam that raise the concerns of activists. (Photo: AFP)

Menacing macaques snatch bags of crisps, water bottles, cookies and crackers from uneasy tourists on Vietnam's Monkey Island, a popular attraction decried as cruel by activists calling for an end to animal tourism in Southeast Asia.

Tourists are encouraged to show the monkeys their empty hands if they don't want to be accosted by the aggressive macaques, who routinely steal snacks, hats, and even mobile phones from visitors, who nervously laugh and snap pictures.

"They grabbed my biscuits and climbed on my body," Dinh Thi Hoa told AFP on the small island in Nha Phu bay in south-central Vietnam.

"I didn't even have time to open my bag, the monkey took it from me and opened it!" she said, smiling, after a gang of macaques rifled through her rucksack.

It is one of countless animal tourism sites across Vietnam where for just a few dollars visitors can ride elephants or ostriches, or see costumed bears and tigers perform at circuses.

Over on Monkey Island, macaques ride motorbikes, lift weights and shoot basketballs in their own packed circus performance that ends with a monkey in a frilly skirt collecting tips from the audience.

Elsewhere on the island, visitors eagerly place bets on a monkey swimming race to close out a morning of animal entertainment.

It's cruel work, according to some.

"Travel companies and tourists must stop buying tickets to cruel exhibits like Monkey Island," he added.

There are about 1,200 macaques on the small island, where vaccine experiments were once carried out by Soviet scientists before it was transformed into a tourist attraction in the 1990s.

Monkey Island manager Truong Nguyen Phuoc An says the animals are never beaten, and are well looked after thanks to tourist dollars.

"We can have money to maintain the island and buy more food for the monkeys," he told AFP, as tourists boarded boats under a searing midday sun.

Throngs of visitors stream though every week, mostly Vietnamese, Chinese and Russians who jet across the bay from the beach resort hotspot Nha Trang.

Many are happy to see the monkeys, brushing aside claims the animals should be left alone.

"I think they are well-fed and happy, it's perfect," said Kirill, a 19-year-old visitor from Russia.