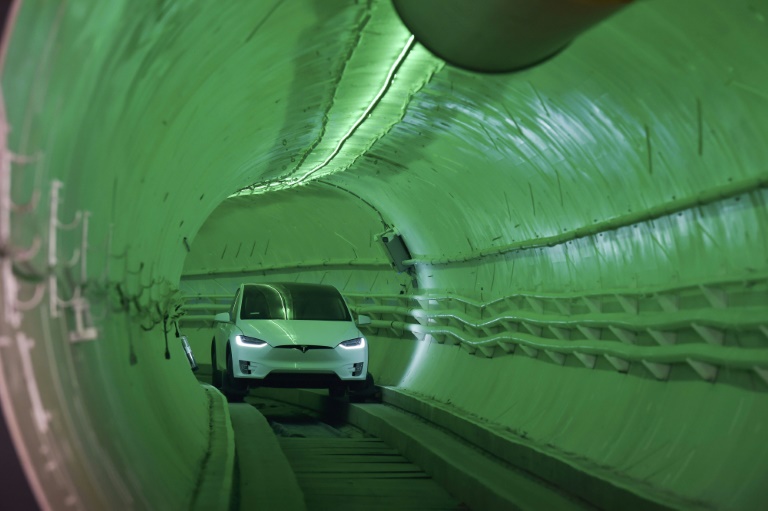 Enterpreneur Elon Musk, here in a modified Tesla electric vehicle at his Boring Company's California test site in December 2018, expects the first commercial version of the people-moving tunnel to open in 2020 in Las Vegas. (Photo: AFP)

A nearly mile-long tunnel in Las Vegas meant to showcase a "traffic busting" alternative for overcrowded cities should be completed next year, innovative entrepreneur Elon Musk said on Twitter.

The people-moving tunnel is being built by The Boring Company, one of several future-oriented enterprises founded by Musk, along with the Tesla electric-car company and SpaceX, which develops launch vehicles.

The 48-year-old billionaire tweeted late Friday that "Boring Co is completing its first commercial tunnel in Vegas, going from Convention Center to Strip."

In a second tweet he said it would be "hopefully fully operational in 2020."

The Las Vegas convention center is a sprawling complex being further enlarged -- the 0.8-mile (1.3 kilometer) tunnel would facilitate travel within the center and to the city's famous Strip, where many of its major hotels and casinos are located.

The South Africa-born Musk, who is known for original and sometimes fanciful thinking, has long advocated a futuristic underground train system, called the Hyperloop, that would allow passenger capsules on Tesla-built chassis to move through low-pressure tubes at high speeds.

He aspires eventually to build such a system linking Washington and New York along the busy US Northeast corridor; he has also proposed projects for Chicago and Los Angeles.

The cost of the tunnel, originally estimated to be as low as $35 million, has since risen to $52.5 million, according to the Las Vegas Review-Journal.

He says the idea came to him as he sat in growing frustration in his car, stuck in a traffic jam between his pricey villa in Bel Air, California and the SpaceX offices in Hawthorne, south of Los Angeles.

He envisions thousands of autonomous electric vehicles eventually moving millions of people underground at speeds up to 155 miles per hour (250 kph) -- far higher than the moderate 35 mph speeds planned for the short Las Vegas link.