Nation's emphasis on winter sports has increased travel to Switzerland 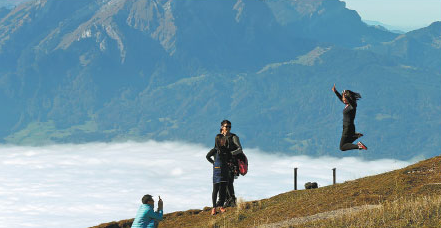 From handmade mechanical watches to mouth watering cheese fondue, from world-class chocolate to the chilling breeze coming down from the ice tip of the mountain Alps, Switzerland has become a more popular destination for Chinese tourists looking for a quality holiday.

Bernardino Regazzoni, Swiss ambassador to China, said the number of Chinese tourists visiting Switzerland has topped a historical high. Chinese visitors now account for 1.73 million nights in Switzerland, an increase of 6 percent from 2017.

At the same time, more Chinese guests visiting Switzerland are choosing to travel by themselves without signing up for a tourist group. That trend is making custom tours more popular, Regazzoni added.

Winter travel in particular has seen a big boost. According to Switzerland Tourism, from November 2017 to April 2018, Chinese tourists stayed in Switzerland for more than 530,000 nights, an increase of 8.4 percent over the same period last year. As a home to world-class snow resorts and the top skiing sites, mountainous accommodation in Switzerland accounted for 56 percent of the total nights Chinese tourists made in that period.

According to research from ClubMed, a luxury holiday resort brand, and TripAdvisor, one of the world's largest travel sites, Chinese demand in the snow sport market has been booming. It's led by the country's call to encourage 300 million people to participate in snow sports by 2022.

A soaring number of Chinese tourists have shown strong interest in traveling abroad for the top-notch snow venues, as 18 percent of surveyed Chinese tourists said they've traveled to another country just for the outdoor fun. And Switzerland, home to every skiers' dream - Swiss Alps, not surprisingly, has become among the top three most popular destinations for Chinese tourists. "With the Beijing Winter Olympics coming in 2022, the interest in winter sports is clearly rising in China," said Simon Bosshart, a director at Switzerland Tourism whose department includes travel from China. "We are proud to say that our resorts are ready to welcome Chinese guests in an appropriate manner. For example, we have 19 ski resorts offering one-day ski experiences."

Fredi Michel, business unit manager for Davos Klosters Tourism, which undertakes the management of the tourism organization in the town of Davos, located in the Swiss Alps, said China has become its fastest growing tourism market. Chinese tourism has grown at a pace of 30 percent annually over the past five years, he said.

He added that the town has been in contact with Chongli district of Zhangjiakou for cooperation in snow sport training and tourism promotion.

In addition to winter sports, other outdoor travel activities in Switzerland are also becoming more popular in China, including trekking in mountain trail. Regazzoni said more Chinese tourists have participated in the outdoor activities to discover the beauty of nature in Switzerland. During a recent press meeting hosted by Switzerland Tourism in Beijing in April, outdoor trail trekking was featured as the theme of summer.