KATHMANDU, Feb. 10 (Xinhua) -- Escape from congestion, cold and crowd, celebrate your new year in Nepal where summer is cool and winter is warm. It is the message that Nepal Tourism Board (NTB) conveyed to the Chinese people during the ongoing holiday of Chinese Lunar New Year, or Spring Festival. 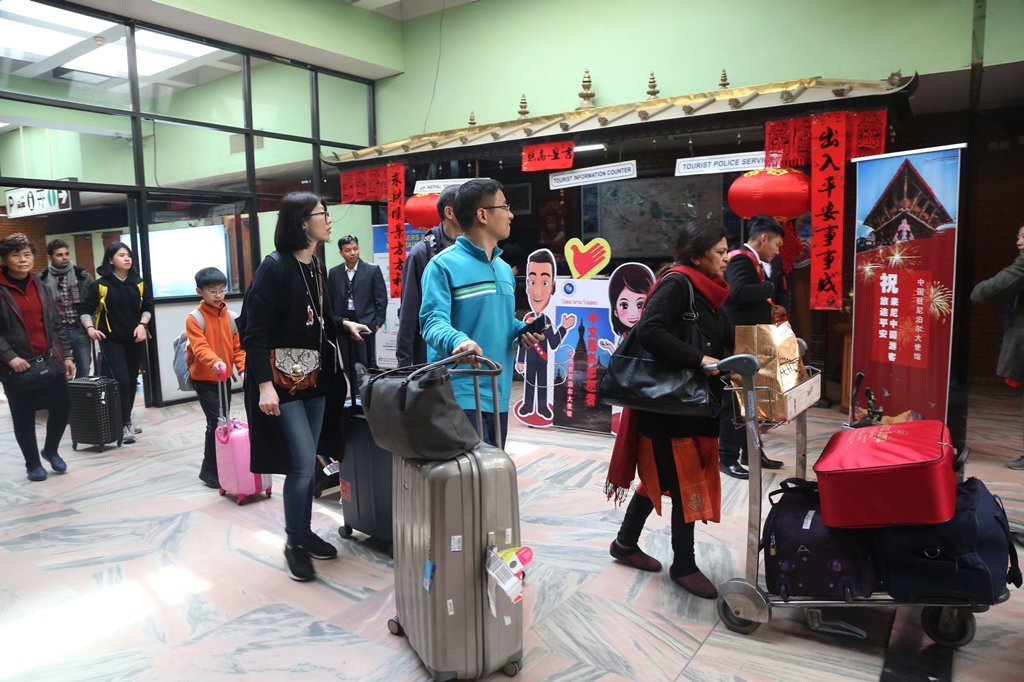 As China has emerged as second largest source market for Nepal's tourism sector in the recent years after India, the Himalayan country is making every effort to bring in Chinese visitors.

"Many activities are being organized on the occasion of Chinese New Year in Nepal in cities like capital Kathmandu and western tourism city Pokhara," Deepak Raj Joshi, chief executive officer of NTB told Xinhua last week.

Chinese Spring Festival began on Feb. 5 and the Chinese people travel to different destinations during the week-long holiday as a large number of people choose Nepal.

Kathmandu, Pokhara and Chitwan are common destinations for most of the Chinese tourists visiting Nepal during the Spring Festival.

Rashika Shrestha, sales and reservation supervisor at China Eastern Airlines Office in Kathmandu, told Xinhua on Sunday that the China Eastern has occupancy remained almost full in the recent days.

During the festival season, Nepali travel sector has a busy schedule managing the Chinese tourists.

Kishor Raj Pandey, chairman of Saathi Travel, has been organizing trips for seven groups of Chinese tourists, each consisting of around 15 people.

"We organize trips for maximum 3-4 groups in normal days in a week. We are now dealing with seven groups this week as more Chinese visitors came to Nepal during the New Year holidays," Pandey told Xinhua.

Saathi is a pioneer travel agency in bringing in Chinese tourists since early years of this century.

Similar is the experience of Shuang Qi Tour Pvt. Ltd, a tour agency dealing with Chinese tourists in Nepal.

"Normally, we deal with 400-500 Chinese visitors in a month. We are organizing trips for around 500 visitors in a week-long holiday of this Spring Festival," Bishwesh Shrestha, managing director of Shuang Qi Tour, told Xinhua last week.

SNT Holidays, another travel agency, has also witnessed upswing in Chinese visitors for the New Year. "More Chinese tourists have come to Nepal this Spring Festival. We are seeing surge in arrivals of individual visitors compared to those who come in a group this time around," said Sri Ram Thapa, managing director of the company.

Nepal's travel trade sector has been organizing the welcome ceremonies and handing out greeting cards and gifts for the Chinese visitors coming to Nepal during the New Year.

Hotel Annapurna, a five-star hotel in Kathmandu, has also prepared special menu targeting the Spring Festival. According to hotel officials, around five percent of the rooms have been occupied by Chinese tourists currently.

"Although occupancy from Chinese visitors is not so high, they are all high-end visitors," Atma Khanal, sales executive at the Hotel.

Although arrivals of Chinese tourists have grown during the Spring Festival, Nepali travel trade sector believes that number could grow even higher if the airfare for Chinese visitors coming to Nepal becomes cheaper.

Therefore, Nepali travel industry officials insisted that there should be more competition among the airlines connecting Nepal and Chinese cities.

As Nepal celebrated arrivals of over 1 million foreign tourists in a year for the first time in 2018, a record 153,602 Chinese tourists visited the country in that year, a rise of 46.8 percent compared to 2017.