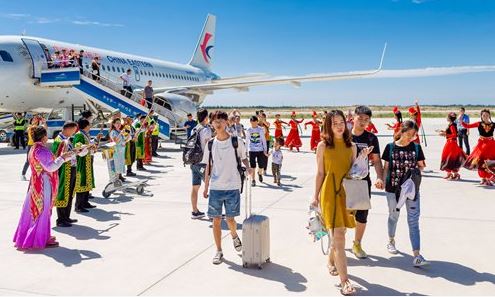 The National Development and Reform Commission (NDRC) said in a statement on its website that it approved the Yutian Airport in Hotan Prefecture as the airport will improve the transportation system, enhance the region's emergency rescue and support capacity, and promote tourism.

The airport's construction brings the goal of building 33 airports in the region by 2025 a step closer.

Xinjiang has 21 transport airports in use as of 2018, the most among provincial regions in China. By 2025, this will rise to 33, according to a national plan released in 2017.

Airport construction in Xinjiang has increased in recent years as it is considered to be a way of boosting local economy and tourism, and also to safeguard frontier safety as it is close to regions where terrorism and extremism are rampant, analysts told the Global Times.

Since cities in Xinjiang are distant from each other, the large number of airports will link small cities in the region to other major cities across China, which will facilitate local tourism and further allow people from different regions to get to know Xinjiang better, Wang Ya'nan, chief editor of Aerospace Knowledge magazine, told the Global Times on Tuesday.

Compared with railways, airport construction is more cost-efficient and suited to the natural environment of Xinjiang dominated by mountains and deserts, Wang said.

The airports could also serve a national defense purpose in case of war, making the mobilization of resources quicker than land transportation, Lin Quan, head of the Institute of Civil Aviation Safety from the Civil Aviation University of China, told the Global Times on Tuesday.

Analysts noted that construction of airports will promote the regional economy as it facilitates people-to-people exchanges, which will then improve the stability of Xinjiang and further help the fight against terrorism and extremism.

Xinjiang, which accounts for about one-sixth of China's total land area, has seen steady growth since there has not been any terrorist incident during the past three years and the security situation has improved significantly.

In the first quarter of 2019, domestic and foreign travelers made a total of 21.4 million trips to Xinjiang, up 67.31 percent year-on-year, and the region saw a 72.77 percent year-on-year increase in tourism revenue to 24.44 billion yuan, according to official data.