Limiting the spirit of open scientific research by monitoring Chinese students and scientists can only suppress the progress in science in the United States, academics said recently. 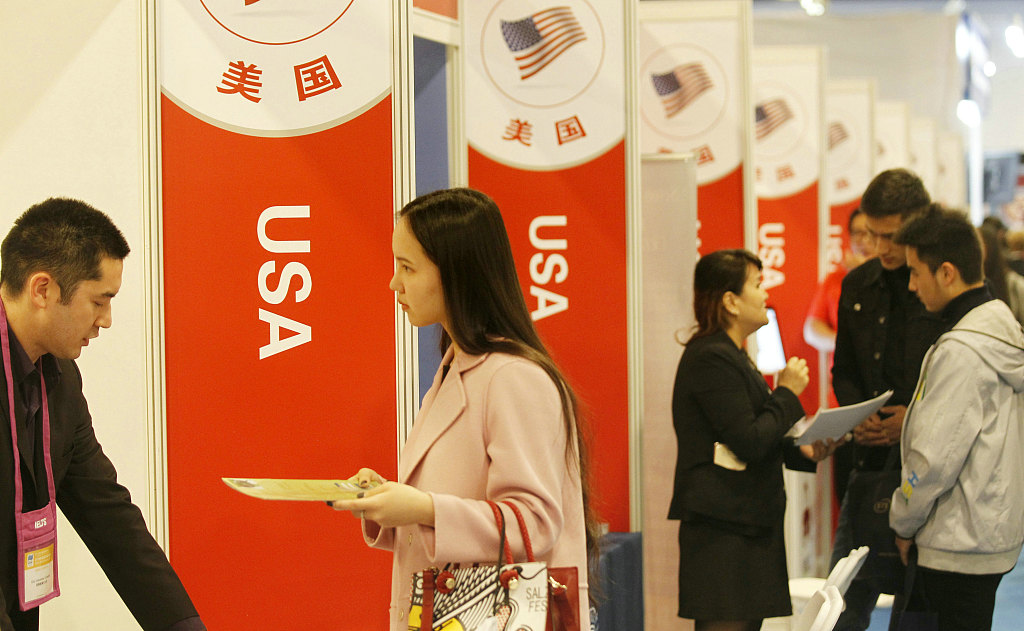 A visitor consults at the US counter at China Education Expo in Beijing in October 2016. (Photo: VCG)

The FBI is urging universities to monitor some of their Chinese students and scholars in the country. According to a report on National Public Radio, US intelligence agencies are encouraging US research universities to develop protocols for monitoring students and visiting scholars from Chinese State-affiliated research institutions.

Since last year, FBI officials have visited at least 10 members of the Association of American Universities, a group of 62 research universities, with an unclassified list of Chinese research institutions and companies, the report said.

"We are being asked what processes are in place to know what labs they are working at or what information they are being exposed to," Fred Cate, vice-president of research at Indiana University, told NPR. "It's not a question of just looking for suspicious behavior-it's actually really targeting specific countries and the people from those countries."

A series of actions over the past few years has heightened concerns among Chinese and Chinese American scholars, including the arrest of China-born scientists, the firing of several others and closure of their labs, frequent calls from the FBI and visits to many individuals without any charge and a tightened visa process.

In a panel discussion at the China Institute in New York on June 27, Chinese American scientists agreed that the freedom of scientific research in the US faces serious challenges.

"This is a challenging time for US-China relations," said Fred Yan, president of the Chinese Association for Science and Technology, USA.

"China is perceived to be in contention with the US for global dominance. Whether it's true or not, we Chinese Americans and Chinese students who are legally here are caught in between," he said.

Xi Xiaoxing, a physics professor at Temple University, said he believes limiting the spirit of open scientific research can only suppress the progress of science in the US.

Four years ago, Xi was accused by the State Department of sharing a US company's technology with China. The charges were dropped after a few months.

Xi, a renowned expert in superconductors, has had to pay more than $200,000 in legal fees and had suffered a disruption of his life and work. He now has only two of nine federally funded research projects and only three of his lab's formerly dozen researchers remaining.

Responding to the Friday NPR report, the FBI said it "regularly engages with the communities we serve. As part of this continual outreach, we meet with a wide variety of groups, organizations, businesses, and academic institutions".

Xi called the investigators reckless and said that even though four years have passed since his arrest, he still worries from time to time that the government will come after him again for some other crime.

"Once a scientist is sued, even if he is cleared, this 'stain' will never be able to be erased," he said.

Ju Yiguang, a Chinese professor and the director of the sustainable energy program at Princeton University, recalled that at the beginning of this century, he joined Princeton after living and working for years in Japan.

Even though his English was not fluent, he was invited by NASA to participate in some research, which would be "unimaginable" today, he said.

Ju said that at the time, it was known that anyone in the United States had a chance to serve it. But now, he feels frustrated.

"Before Professor Xi's case, we understood that intellectual property was something sensitive, and we had to keep ourselves clear. But today we are discussing a different dimension, that is foreign influence in academia, so you don't know where the borderlines are or when you cross the line," Ju said.

He said there was an increasing fear of a new McCarthyism among the community of Chinese American scientists "as the trade war eventually became a technology war and might be ending up as a political war".

"So in pushing us, you have to pick one side," he said.