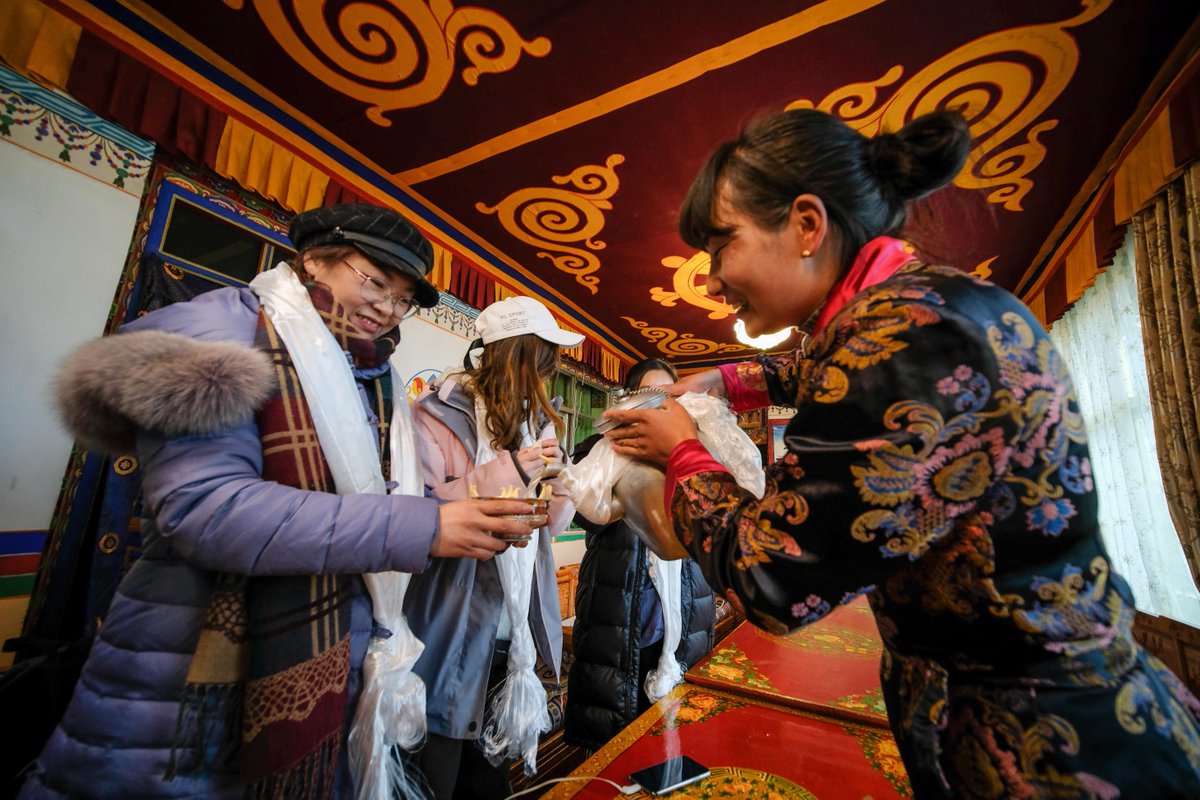 The two festivals were both marked on February 5 this year, giving people in the region the chance to enjoy a 10-day holiday.

The local tourism department on Thursday said that Tibet had received 511,700 tourists during the 2019 Tibetan New Year and Lunar New Year holidays, an 11.6 percent year-on-year increase, bringing in revenues of 353 million yuan ($52 million).

Among the tourists, 177,000 stayed overnight in the region and 334,700 took one-day tours. Both numbers saw increases.

"I enjoyed a relaxing vacation in Tibet. It is especially beautiful in winter," Yin Xiaomei, 29, from Southwest China's Chongqing Municipality, told the Global Times.

Yin and her friend celebrated the Spring Festival during their trip to Nyingchi prefecture, a place east of Lhasa with an altitude of 3,000 meters, lower than the average altitude in Tibet.

"You can only see Namcha Barwa clearly in winter," Yin said, excitedly showing reporters the photo she took. The 7,780-meter-high Namcha Barwa Peak, the 15th highest in the world, was named the most beautiful peak in China by Chinese National Geographic magazine in 2017.

Yin said that they bought discounted entrance tickets and stayed in luxury hotels that were much cheaper than during the peak tourist season. "The return flight tickets were only 1,570 yuan."

Official data showed that more than 30 million tourists visited Tibet last year, a year-on-year increase of 31.5 percent, the highest figure since 2013, according to a report by the Xinhua News Agency on Friday.

Traditional celebration rituals of the Tibetan and Han ethnic groups for New Year could be seen all around the region. Red lanterns were hung in front of shops along the streets in Lhasa together with colorful Tibetan-style streamers.

Tourists could experience the "Tibetan style" New Year by putting on Tibetan costumes, watching Tibetan plays, and doing Tibetan dances. At one hostel in Lhasa's Chengguan district, young tourists from around the country ate traditional "gutu" and set off firecrackers together, the Xinhua reported.

"There were more tourists than in previous holidays," an owner of a Tangka painting shop in Lhasa's Barkhor Street told the Global Times on Friday.

"The economy is developing and Tibet is no worse than other regions in China now. It is like New Year every day," Abo, a Tibetan resident in his 30s who lives in a rural area near Lhasa, told the Global Times.

To celebrate the Tibetan New Year, he threw a banquet that featured around 20 dishes.

"Even though we couldn't share this holiday time with our families, being able to provide quality services to tourists in Tibet and having fun was worth it," an employee from the Zhuomei tourism agency of Tibet was quoted by tibet.cn as saying.

"Sometimes tourists couldn't see the whole of Qomolangma due to heavy snow and sometimes they experienced power failures in hotels, but most of them are satisfied with the whole trip," the employee said.

"In winter, the oxygen level is lower, as there are fewer green plants. Also it is very cold with a lot of snow in the season, so tourists can't visit every place," an employee at the Lhasa Travel Company told the Global Times in a previous interview. She did not give her full name.

"But this Spring Festival, you can see many more tourists in Tibet because of the discount policies," she said. "Also there have been growing numbers of tourists in recent years."

From November 1, 2018 to March 15, 2019, entrance is free for some A-level scenic spots, including the iconic Potala Palace and Namtso Lake. Other attractions also offer big discounts. Hotels, traveling by car and by air are also cheaper than at other times.

The favorable policy is part of a new round of the "Visiting Tibet in Winter" project. The first round was launched in February 2018 and provided free admission to 115 tourist attractions in the region.