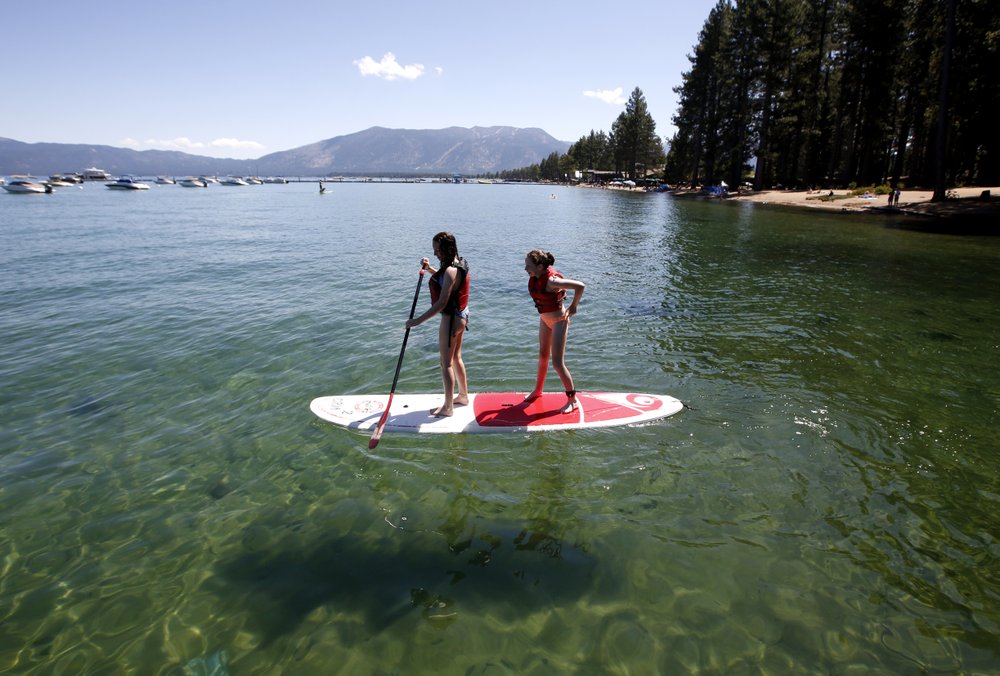 Freya Mayo, left, and her sister Evie, of London, England, try out a paddle board on Lake Tahoe near South Lake Tahoe, California, August 20, 2019. The fallout from humanity's addition to plastics is showing up in the waters of Lake Tahoe. Scientists detected microplastics at several locations around the lake for the first time this year and are working to understand what that means for human health and the environment of the Tahoe Basin. (Photo: AP)

The fallout from humanity’s addition to plastics is showing up in the waters of Lake Tahoe.

Scientists detected microplastics at several locations around the lake for this first time this year and they’re working to understand what that means for human health and the environment of the Tahoe Basin.

Microplastics, the term for tiny pieces of plastic that come from everything from water bottles to synthetic fleece sweaters, are ubiquitous, so it’s not surprising to find them in Lake Tahoe, experts told the Reno Gazette Journal. They’ve been found in fish in the oceans and raining down from the sky in the Pyrenees mountains straddling France and Spain.

A team of researchers from the Desert Research Institute is digging deeper into the issue to learn more about potential ramifications for Nevada.

“I don’t think we fully understand the effects of microplastics on the environment,” said Monica Arienzo, who was on the team that found microplastics in Lake Tahoe water and in snow in the Tahoe Basin.

The work at Lake Tahoe is part of an effort the DRI Foundation funded to learn more about microplastics in Nevada. The researchers are scheduled to present their findings to the American Geophysical Union in December.

“There has been a lot of work done in marine environments and far less in freshwater, and less even in alpine lakes,” said Meghan Collins, education program manager for Desert Research Institute.

In addition to lakes and streams in the Tahoe Basin, the researchers are also studying the Las Vegas dry river basin in Southern Nevada, which drains into Lake Mead.

The team sampled one site in Lake Mead, three in the Las Vegas dry river basin, and six sites in Lake Tahoe, including both low and high traffic areas for boats and at storm water inflow sites.

“We are in the process of identifying what types of plastics those are so we can better identify the sources of those plastics,” Arienzo said.

So little is known about microplastics that there aren’t any standards for drinking water, said Andy Gebhardt, director of operations for the Truckee Meadows Water Authority.

“EPA recognizes they do exist but they have not set the criteria for standardization of methodology surrounding an analysis,” Gebhadt said. “At the end of the day we meet all local, state and federal guidelines for drinking water and our water is safe to drink.”