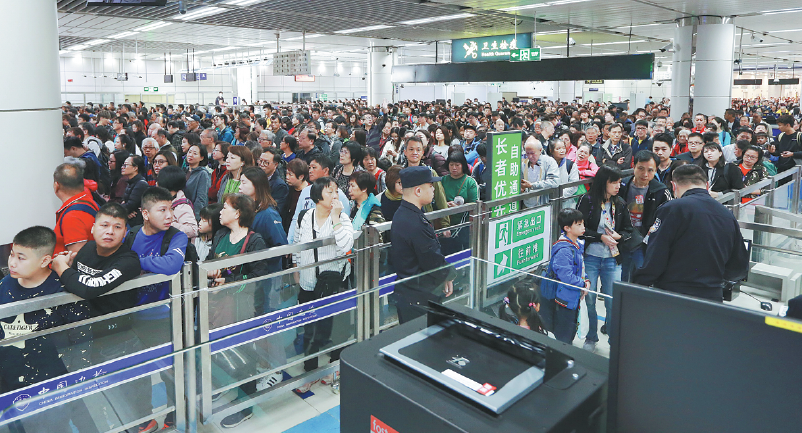 John Lam arrived in Shenzhen on Wednesday morning after standing in a long line to complete entry procedures at the Shenzhen Bay Control Point.

"It was really crowded in the checkpoint's arrival hall," he said.

Lam, one of the thousands of Hong Kong residents who traveled to neighboring Guangdong province for the Christmas holiday over two days, planned to see friends and dine out before visiting some scenic spots.

Previously, the trend was reversed, with crowds of mainlanders crossing the border to witness the Christmas celebrations in Hong Kong.

Guangdong's wealth of tourist sites has made the area a desirable destination for people from the Hong Kong Special Administrative Region in recent years. Crowds were heavy as more than 50,000 people had passed both ways before noon on Wednesday. More than 42,000 of those were arriving from Hong Kong — an increase of 45 percent over the same day last year — while only 8,000 were heading to Hong Kong.

Authorities said the crush of people entering Shenzhen via the checkpoint, one of the busiest entry gates from Hong Kong, didn't let up on Thursday, and similar throngs were expected through Saturday.

Among the other things that attract visitors from Hong Kong are Shenzhen's Cantonese cuisine, the availability of goods at low prices, convenient transportation and holiday promotions.

Suki Mok arrived in Shenzhen via the Luohu Checkpoint on Wednesday. "There are crowds at the checkpoint, but they're orderly and the flow is smooth and good," she said.

Mok, who visits Shenzhen at least twice a week, spent about 200 yuan ($28.60) to have dinner with friends in a Shenzhen restaurant on Wednesday evening.

Mok usually gets a massage, which also is much cheaper than in Hong Kong. Also, Shenzhen competes with Hong Kong in cleanliness, she added.

With major infrastructure projects linking Hong Kong and Guangdong opening in recent years, it only takes about an hour to travel between many cities in the Guangdong-Hong Kong-Macao Greater Bay Area. It now takes Hong Kong residents less than 20 minutes to reach Shenzhen via high-speed train and about 40 minutes to drive to Zhuhai via the Hong Kong-Zhuhai-Macao Bridge, which opened a year ago.

Many banks promise discounts and cash back for those who use their credit cards in Guangdong, which is widely viewed as a showcase for China's reform and opening-up process.