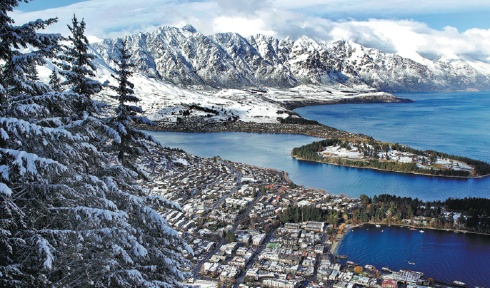 A view of Queenstown, New Zealand, with the snow-covered Remarkable mountain range providing a stunning backdrop.[Photo/CORBIS]

WELLINGTON－Running a cozy lodge at the lakeside of Wakatipu in Queenstown, New Zealand, Mrs Cheung can enjoy the view of the snow-capped Mount Remarkable through the windows.

Her four luxurious rooms were always booked during the ski season when people from all over the world swarmed into town. But not many have come this year after the COVID-19 lockdown, even during the New Zealand school holidays. The winter of this southern hemisphere town seemed even colder than ever.

Jim Boult, mayor of the Queenstown Lakes District, told Xinhua that the town had New Zealand's fastest-growing economy during 2014-19. It contributed 11 percent to the National Tourism GDP and had the lowest unemployment rate in 2019. It is estimated that 63 percent of jobs in the district were directly related to the tourism industry. Indirectly, that number could rise to more than 80 percent.

The closure of New Zealand's borders has had a devastating effect on many businesses. Boult estimated that without the return of international visitors, 7,900 locals might face job losses and more than 270 million New Zealand dollars ($181 million) in lost earnings, given that permanent residents in the district number only 40,000.

The New Zealand government has launched a domestic tourism campaign to mitigate the negative effects on tourism. However, not many people in the business think it could cover the gap of international expenditure.

Adrienne Young-Cooper, acting chairwoman of Queenstown airport, hopes the number of passengers could get back to around 900,000, 40 percent of previous years in the next 12 months.

Australia, China and the United States used to be the top three sources of Queenstown airport foreign passengers, she said. She called on the government to lift the border ban on passengers from countries that have similar COVID-19 tracing systems, quarantine measures and better control of the virus.

To promote local tourism, Mayor Boult took a bungee jump on the first day when New Zealand lifted the compulsory lockdown to tourism. During that time, he was also busy lobbying the government for an extended wage subsidy to help local businesses stay open.

"We are working very hard to diversify our economy. We have an enormous number of proposals ranging from technology development to medical tourism and will continue this very important work,"Boult said."I would be very pleased to see measures developed that allowed for the safe arrival of international visitors supporting our economy in fields such as the film industry, major events and sports."

Young-Cooper said it was crucial to "keep links alive" in the post-COVID era and target customers who have visited Queenstown and the South Island before. She also suggested paying more attention to digital apps and platforms on which the younger generation uses.

Lisa Lee could not agree more on this point. Running tourism in New Zealand for more than 10 years, she is the chief executive manager of CYTS NZ, a large agency that mainly depends on tourists from China and Chinese communities.

She said the consumption behavior of tourists has been changed permanently because of the pandemic.

Since June, Lisa decided to change her business model completely by trading online via popular digital apps that Chinese younger consumers are familiar with.

"Tourists won't come back as long as the border remains closed. But trade will continue. Virtual touring on the internet will possibly lead to online purchasing. Thanks to New Zealand's renowned scenery, revenue pops up," Lee said.