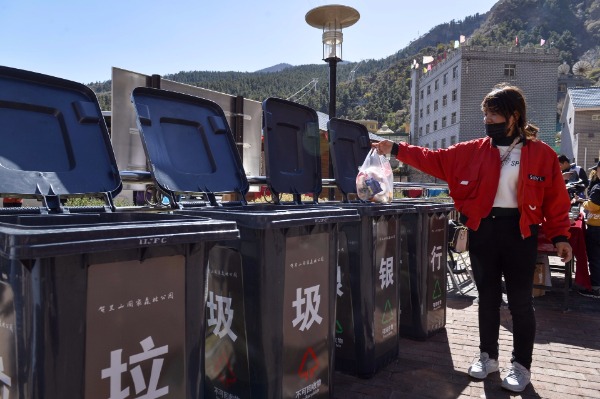 As tourist Qian Yunxia goes off to the Helanshan National Forest Park, she brings with her a bag of garbage and takes it to a bank in exchange for gifts at the foot of the mountain area.

"It's a beautiful place, and we should keep it clean," said Qian, from Gansu Province.

The "garbage bank" in Northwest China's Ningxia Hui autonomous region has seen its "business" soar during the National Day holiday, during which tourists flocked to the scenic area. The bank pays "interest" such as souvenirs and even free trips for tourists who collect and deposit garbage from the mountain.

The bank has four big dumpsters and was set up in July in the parking lot of the park to clean up the local environment. Tourists can bring garbage they collect to exchange for Goji berries, or wolfberries, paper fans and other hand-made souvenirs.

"Rewards are not the most important," Qian said. "The point is to keep our mother earth beautiful."

The mighty Helan Mountain stretches across Ningxia and Inner Mongolia and is an important ecological barrier in the northwest. The forest park is tucked away in the mountains and boasts a variety of undulating hills, thick forests and playful animals.

But while visiting the park is pleasant, cleaning it is not.

According to Bai Yuyin, a sanitation worker who has been working at the scenic spot for years, garbage in the park used to be a big headache for them.

"Garbage is usually scattered around the mountain, and collecting it is hard and dangerous," Bai said. "Some tourists even toss beer bottles into the valleys just to hear the sound."

Wang An'ping, assistant manager of the park, said tainting the Helan Mountain will destroy everything, and that environmental protection is urgent.

In July, local volunteers opened the garbage bank, and Wang said they "finally figured out a cost-effective way to encourage tourists to reduce garbage."

Besides souvenirs, tourists selected by the park will also enjoy access to the park free of charge three times throughout the year, while their companions can receive a 50 percent discount.

Since the project was launched, less garbage was seen in the area.

"We handed out about 2,000 garbage bags every day during the National Day holiday, which greatly reduced garbage here," said Xue Yan, a volunteer at the park.

"Raising public awareness of environmental protection will be a long process, and we will continue to implement the project in the future," said Wang An'ping.