Ningxia was among the soughtafter destinations, along with such places as Chile’s Maipo, New Zealand’s Wairarapa, Canada’s Quebec and Japan’s Yamanashi.

The forum held in October was part of the Ninth International Wine Expo of Helan Mountains’ East Foothill. Themed “In the wine capital, we embrace the purple dream,” the event was organized by the Ministry of Agriculture and Rural Affairs and Ningxia’s government.

Regina Vanderlinde, president of the Paris-based International Organization of Vine and Wine, says she felt fortunate to experience Ningxia’s vitality.

“With the support of the government’s preferential policies and improving product quality and recognition, the Ningxia production area has achieved significant development,” she said at the opening ceremony. 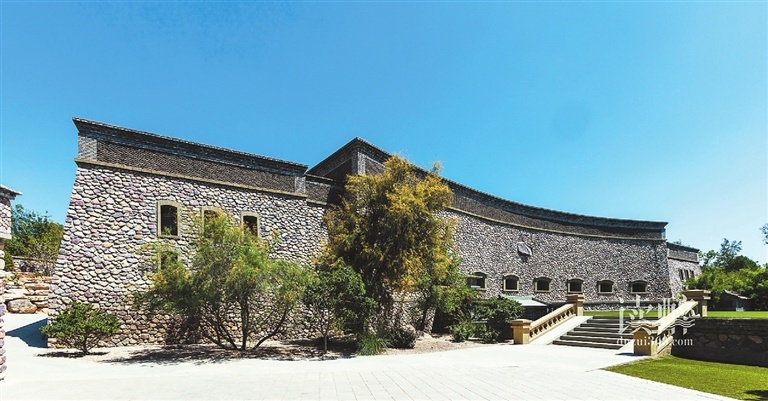 Ningxia’s Helan Mountains is considered one of the world’s “golden areas” for winemaking. It not only produces quality wine but also possesses strong wine-tourism potential.

In 2013, the region was included in The New York Times’ “46 Places to Go” list, as “the local government has reclaimed desert-like expanses, irrigated them profusely, planted them with cabernet sauvignon and merlot, and started a campaign to transform this rugged backwater into China’s answer to Bordeaux.”

By the end of 2019, there were over 38,000 hectares of vineyards in Ningxia, accounting for a quarter of China’s total. The region’s 92 wineries can produce 130 million bottles and attract over 600,000 visitors annually. Another 119 wineries are under construction.

Yinchuan will host the Concours Mondial de Bruxelles international wine-tasting event in May 2021. It will be the second time the event has been held in China since it was staged in Beijing in 2018.

Zhejiang University professor Zhou Lingqiang, who is also the director of the wine-tourism think tank of the Helan Mountains’ eastern foothills, shared his team’s research on online comments about China’s wine-tourism market during the forum.

The research took four months of data collection and analysis, and examines Ningxia’s wine tourism and the overall development and characteristics of wine tourism in China.

“We particularly want to know the answers to such questions as whether it’s worth looking forward to eating, staying and vacationing in the winery,” Zhou says. He believes wineries should not only meet the general requirements of accommodation, catering, conferences and photo taking but also host professional properties related to wine.

“Wine tastings, grape picking and DIY wine have attracted the most attention among tourists, and sightseeing is essential,” Zhou says.

Wedding ceremonies and banquets are also increasingly popular. Zhou says there are few comments about children’s entertainment at wineries.

He suggests chateaus learn from the Hameau Duboeuf wine theme park in Beaujolais, which is known as the “Wine Disneyland of France.”

The research shows that Ningxia ranks first in the Online Popularity Index in China.

“There’s still a lot of room for improvement of the relevant business in Ningxia,” he says. “The wine corridor of the Helan Mountains’ eastern foothills has basically taken shape. Wine tourism in Ningxia will develop rapidly.”

Among the 96 wineries involved in the research, 28 are rated as A-level attractions. Zhou believes cooperation with scenic spots will become an inevitable trend for China’s wine tourism.

Zhou says 68 percent of online comments about wineries in Ningxia are about Chateau Changyu Moser XV, which is a 4A-level scenic spot.

A rapidly growing number of comments are about Yuanshi Vineyard, which researchers expect will become another major destination.

In 2015, his daughter, Yuan Yuan, who earned a tourism-management degree from Sun Yat-sen University, returned to Ningxia and took over the vineyard from her father, becoming the youngest head of a chateau in the Helan Mountains’ eastern foothills area.

Developing tourism is one of Yuan Yuan’s main goals. The area attracted over 150,000 visitors last year.

“We’ve arranged many activities. For example, in May, we stage a carnival for crabapples since we’ve planted crabapple trees along each of our vineyard’s 17 main roads,” Yuan Yuan says. “We also organize free monthly wine classes for visitors.” About 60 percent of visitors buy wine there.

Yuan Hui built an admission-free leisure park next to the chateau. And the winery’s hotel and restaurant will open at the end of the year so that visitors can stay longer. “I hope our winery can become a must-see spot that brings travelers to Ningxia.”