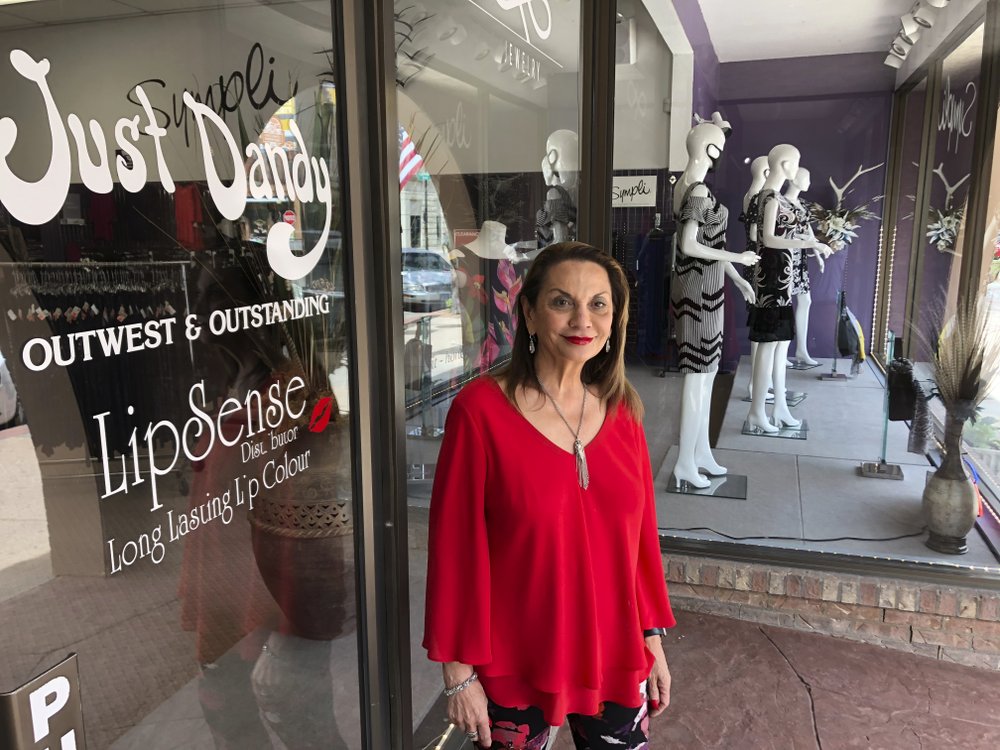 In this Thursday, May 28,2020 photo Virginia Binkerhoff stands outside the Just Dandy women's clothing store she owns in downtown Cheyenne, Wyo. (Photo: AP)

The Just Dandy women’s clothing store in downtown Cheyenne has endured fire, flooding, recessions and so far the coronavirus pandemic, but will this year’s cancellation of the city’s famous cowboy-and-rodeo festival, Cheyenne Frontier Days, be the daddy-of-’em-all disaster?

“I think everybody went into mourning,” store owner Virginia Brinkerhoff said. “It was a hard choice to make. But I hope we can all survive it, the financial impact it’s going to cause.”

Downtown in Wyoming’s capital city looks like a doleful country song these days, with many landmark businesses — such as The Albany, a bar and restaurant known for its steak sandwiches — shut down amid easing but still strict health orders to contain the coronavirus.

Traffic has lessened to the point of days long ago. On a weekday afternoon, you can stand in the middle of Capitol Avenue, take a carefully framed photo of the Wyoming Capitol at one end of the thoroughfare and more of the historic Union Pacific train depot in the opposite direction, before having to step aside for traffic.

Frontier Days — called the “Daddy of ’Em All” and billed as the world’s largest outdoor rodeo — offered hope to many locals that at least some of the 140,000 people who visit this plains city of 64,000 for the late July rodeo and associated carnival, parades, huge public pancake breakfasts and standing-room-only drinking would be back this year to perk things up.

Those hopes ended Wednesday, when Gov. Mark Gordon and Frontier Days leaders announced that the event couldn’t safely take place for the first time in its 124-year history.

Not even when hard times prompted an all-volunteer force to take charge of Frontier Days during the Great Depression, or when a pilot and two bulls were killed in a US Air Force Thunderbirds jet crash at the rodeo arena in 1977, has this show not gone on.

“It’s heartbreaking in every way imaginable,” said City Councilman Jeff White, a 25-year Frontier Days volunteer who got married in a museum at the rodeo grounds. “Not being able to see all the friends I’ve made over the years — just really tough.”

Health-wise, COVID-19 has left Wyoming relatively unscathed. The least-populated state ranks near the bottom of states for deaths and active cases.

Wyoming’s economy is another matter. Diminished electricity use during the pandemic has hit coal mining hard in the top coal-producing state. A global oil price war and coronavirus-related demand problems have slammed the state’s big oil and gas industries.

Not even accounting for potential bankruptcies in the minerals industry, the state is looking at an up to $1.5 billion revenue hit over the next two years — equivalent to all state spending on public education or the entire state workforce, take your pick.

In the home state of the gradually reopening Yellowstone and Grand Teton national parks, the effect on tourism remains to be seen at the outset of summer tourism season. No Frontier Days, which pumps about $28 million into the southeastern Wyoming economy every summer, won’t help.

Cheyenne struggled to fill potholes even before the coronavirus, which led to the layoff of 17 city workers. The loss of Frontier Days “just adds to our already serious budget situation,” White said.

But it’s the blow to Cheyenne’s very identity, as a place where cattle barons built Victorian mansions and steam engines on the Transcontinental Railroad linked the coasts of an expanding nation, that matters even more for White and others.

“The harder thing for us is, this has been such an important part of our DNA for so long,” Dale Steenbergen, president and CEO of the Greater Cheyenne Chamber of Commerce.

“My grandfather said when these times come, that’s when you stand up straight, dust yourself off and start walking forward. He was a rancher who grew up during the Depression. That’s exactly what we’re going to have to do,” Steenbergen added.

Not everybody here feels the same about Frontier Days. While many locals take time off work in late July to be part of the 2,000-strong volunteer army that runs the event, many others get out of town to avoid the crowds.

Some downtown store owners, including one who grumbled about the political influence of top-ranking Frontier Days volunteers and declined to talk on the record, took the opportunity to complain to a roving reporter that even as Frontier Days draws thousands to Cheyenne, the event’s organizers work to steer tourists toward favored, itinerant vendors at the rodeo grounds a few miles away.

“There could be more attention and focus for downtown, without so much at Frontier Park. So that’s our hope as merchants downtown, is trying to rally together and pull some attention to downtown and work with each other,” said Breck Collier, owner of the downtown art, jewelry and furniture shop Red Bison Home.

“They do get circulated through those stores eventually. All we can do is bring people to town and provide good entertainment,” Hirsig said.

The cancellation will be “sad for a long time,” but organizers had their fingers crossed for a big return next year, Hirsig said.

“We’re all in the same boat, and we’re all going to suffer the social consequences and economic consequences. But what can you do?” said Brinkerhoff, who opened the Just Dandy clothes store 48 years ago.

“I’ve been through some devastation, but never to the point I had to close my store up for two months,” Brinkerhoff said. “It’s life. Who knows what will come out of this? I think we’ll come out of this stronger and smarter.”