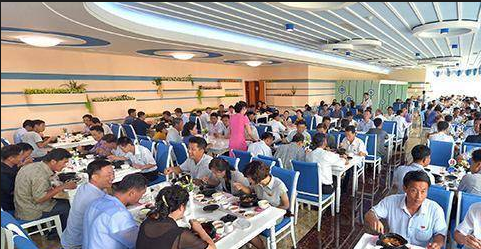 Chinese gourmands are sampling cheap high-quality seafood on one-day trips across the China-North Korea border.Chinese travelers can visit a North Korean international market across the border and eat fresh crab, shellfish, shrimp and fish, a saleswoman at Spring International Travel Services based in Hunchun, Northeast China's Jilin Province told the Global Times Wednesday.The seafood tour has become popular since July 10 in Hunchun, neighboring the North Korean port city of Rason, the saleswoman said. She refused to be named.The destination has earned fame among Chinese travelers for its high-quality North Korean seafood."Seafood on the North Korean side of the border is newly caught directly from the sea and very fresh," she said. "On the Chinese side, seafood is generally kept alive in water vats before being sold."The price is lower than in China, she said. "For example, a kilo of Korean crab sells for about 360 yuan ($52) in Hunchun, but it is only about 180 yuan on the North Korean market." More than 200 customers take a typical tour wacross the border to enjoy the feast and return the same day, according to the saleswoman."You don't need to apply for a visa in advance… Carrying a valid passport or even just an identity card on the day is enough to get you through the border," she said, referring solely to Chinese mainland travelers.The Chinese visitor can only stay at the market and is not allowed to visit anywhere else in North Korea. No sightseeing is included in the tour, she noted.Some Chinese travel agencies are not interested in providing a similar service, as "the tour faces the risk that Chinese customs does not allow you to bring back goods you bought at the market," a salesman at Comfort International Travel said. He refused to be named.Tourists can bring back a "limited" amount, said the Spring International agent, "but if you eat them, it's fine!""We designed the tour around seafood," she said. "We tell our customers that if they expect sightseeing and shopping, they'll be disappointed."