TRAVEL On a wing and a prairie: All roads lead to scenic Chifeng

On a wing and a prairie: All roads lead to scenic Chifeng 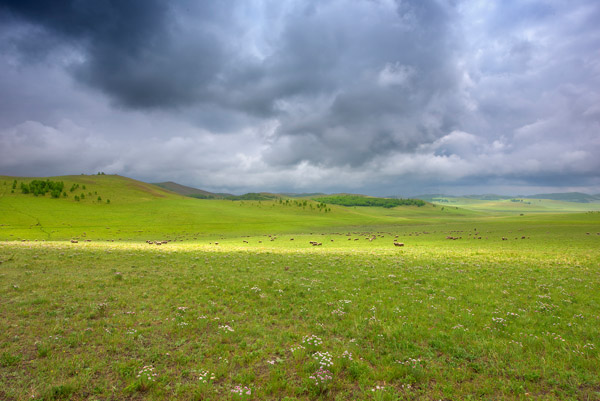 Chifeng's prairie is a key attraction for visitors who also spend time in its geological parks, deserts, forests and traditional villages. (Photo provided to China Daily)

Chifeng has launched six driving routes for visitors to soak up the charms of the city's prairie setting. By integrating scenic spots such as geological parks, forests, traditional villages, homestays and camping sites, the city in the southeast of the Inner Mongolia autonomous region offers surrounding landscapes that include mountains, deserts, grasslands, lakes and hot springs - as well as seven national natural reserves and over 7,300 historical sites.

With its glacial landscape and granite stone forest, Chifeng's Dalinor Lake is home to hundreds of thousands of wild birds that flock to its rich waters that shimmer under the summer sun.

By the end of the Liao Dynasty (916-1125), the ethnic nomadic Qidan tribe had left behind a profound historical and cultural legacy in Chifeng - a key point on the ancient Silk Road.

In 2017, Chifeng received 16.36 million tourist visits, an increase of 12.5 percent compared to the previous year, according to the local tourism commission.

Over the years, the city has developed a range of mature tourism products - from prairie sightseeing tours to cultural experiences featuring folk customs - to draw in more visitors.

"Modern transportation is pulling Chifeng increasingly closer to Beijing," says Zhou Jinzhuang, Chifeng's vice-mayor. Located 400 kilometers away from Beijing, visitors can reach Chifeng by air in an hour or drive there in about four hours.

The high-speed rail connection between Beijing and Chifeng will be completed in 2019 and is set to trim travel time down to around two hours.

"You could be busy in Beijing during the daytime, and be sitting in a yurt on the prairie that night, savoring milk liquor and listening to the melodious tunes of a horse-head fiddle," Zhou says.

For those who enjoy the great outdoors, Chifeng is home to the vast Gongger Grassland, where visitors can enjoy Mongolian nomadic culture, herding and horse races.

On the Wulan Butong Grassland lies the preserved site of the ancient battlefield where Qing Dynasty (1644-1911) emperor Kangxi fought the Mongolian rebels, and is the location of many well-known films and drama series.

In addition to its abundant grasslands, Chifeng is also home to the Hunshandake and Horqin deserts, where sightseeing routes, cross-country race courses and camel-riding tours have been set up to let tourists sample the sandy charms of these regions.

The region also provides culture lovers with the chance to visit one of the largest and best-preserved Mongolian imperial mansions from the Qing Dynasty. A museum dedicated to the ethnic nomadic Qidan tribes is also currently under construction.

To spice up the visitor experience, various prairie festivals and folk performances are being prepared, according to the city's tourism authority. 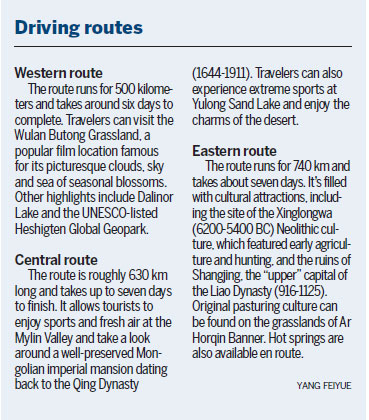