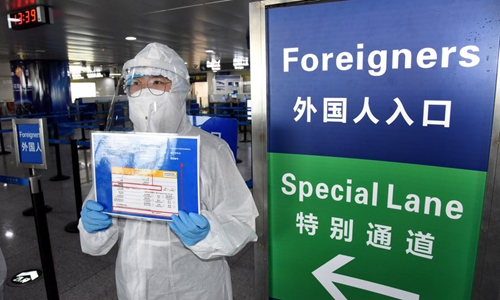 One-way business charter flights from overseas back to China surged in March as the coronavirus outbreak has eased in China while it keeps escalating abroad. A passenger even spent over 1 million yuan ($142,700) to rent a private jet back to China.

"We only have one daughter, and it's all for safety," said a person surnamed Fang who spent 1.2 million yuan to rent a private jet to send his daughter back to Guangzhou, Guangdong Province from London.

Fang told the Global Times that virus prevention in London was not satisfying and British people don't have enough protective awareness.

Fang rented a business jet, Gulfstream G550, through iFlyPlus, a leading private jet platform in China, and brought his daughter back to China last week.

"Our registered customers from overseas surged 11-19 percent from January to March," read a statement sent to the Global Times by iFlyPlus.

Consultations from Chinese overseas have been escalating since March, including entrepreneurs, immigrants and Chinese students, and they are mainly from Italy, Spain and the UK, the statement said.

During the first 10 days in March, the number of booked flights to China from overseas at iFlyPlus surged 227 percent year-on-year, the statement said.

Moreover, the percentage of one-way flights surpassed round-trip flights, which was unusual. For new orders across January to February, 12 percent were from firms who tried to bring staff back to work, and 71 percent were families in order to travel more safely with kids and the senior people, iFlyPlus introduced.

Deer Jet Beijing Co, a famous business aviation company, has helped its overseas partner to roll out a tailored service, to offer charter flights to customers who couldn't afford renting jets independently but had a strong demand to travel, said a statement sent by the company to the Global Times on Monday.

Since the coronavirus outbreak in late January, the private jet market has drawn more attention within China, with new customers hoping to travel safely, the statement said.

Speaking of the high prices, the company explained that the jet needs to take off from Asia, and this will become a round-trip for orders from the UK.

However, previous customers which accounts for a major part of the company's revenue - has been impacted by the virus and the overall volume of business charter flights has dropped by 25 percent.

Ticket prices for normal commercial airlines also rise, with a one-way ticket from London to Beijing on Tuesday varying from 12,000 to 70,000 yuan and  requires two or three transfers.