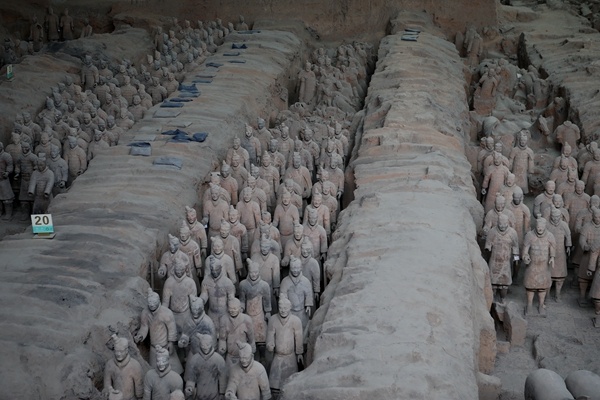 The Terracotta Warriors museum in China's northwestern city of Xi'an is considered one of the greatest archaeological sites in the world.

However, few are lucky enough to visit it in person, with the COVID-19 travel restrictions in place.

On Friday, a new online exhibition was launched by the Chinese Cultural Center Sydney allowing Australians to explore the UNESCO World Heritage site from their homes and learn about the first emperor of China, Qinshihuang.

Qin-the Past and Present of Terracotta Warriors is the highlight of a virtual exhibition series, launched by the CCC Sydney in March, aimed at introducing Australians to China's rich history, imagery and culture. The Terracotta Warriors exhibition marked the final offering of the seven-part series, coinciding with China's Cultural and Natural Heritage Day on Saturday.

At the ongoing virtual display, audiences are fully immersed with a high-definition, 360-degree view of the three main pits of the archaeological site in Xi'an, containing some 8,000 terracotta figures of warriors, with the ability to zoom in and appreciate their unique facial features.

History is brought to life through comparisons with related modern works such as the dance, Symbiosis, and the Qinqiang dance drama, Soul of the Terracotta Warriors of the Qin Dynasty (221-206 BC).

Visitors can also discover the over 2,000-year-old history of the local Qin people who explored wisdom, as well as created advanced technical systems of irrigation, metallurgy, measurement and more.

Since being discovered by accident in 1974, the Terracotta Warriors in China have been a source of wonder for the world, and with some 200 more figures unearthed last year, they continue to shed light on the country's vibrant past.