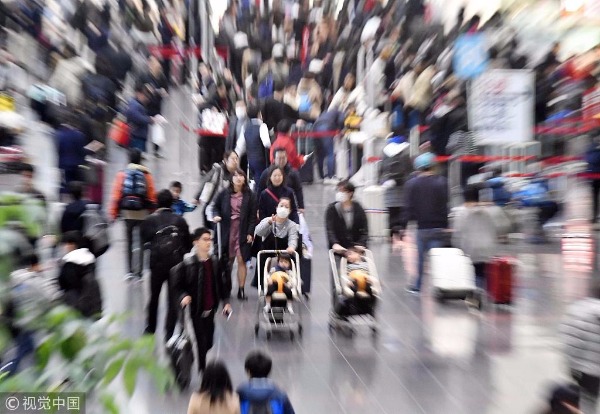 The island of Islay in Scotland is likely to receive more tourists from China, though it has few famous museums or luxury shopping centers.

Yue Yong, founder of a whisky academy in Beijing, has recently been preparing for a study tour to this year's Islay Festival. Yue will lead 12 of his students to the island during the last week of May, to immerse themselves in the aroma of Scotch whisky.

"The new generation of Chinese are in step with their foreign peers." Yue told Xinhua, "This whisky study tour reflects their interest in different cultures."

Yue's students are part of the largest and fastest growing group of spenders in the world.

According to statistics published by United Nations World Tourism Organization (UNWTO) in April, Chinese travelers spent $258 billion abroad in 2017, and made over 142 million international departures.

They didn't just spend a lot of money, but also spent their money in a lot of different ways.

As the reform and opening-up awoke the curiosity of many Chinese about the world, travel agencies in the southern province of Guangdong broke the ice in the early 1980s.

In the beginning, family visits were the only permitted purpose for cross-border travel.

"Only people who had relatives living in Hong Kong could apply for tours," Li Nianyang with GZL Travel Service recalled. He organized some of the earliest tours to Hong Kong when it was still under British control.

The tours had fixed schedules and usually lasted for a week. The fees had to be paid by the Hong Kong relatives.

Liang Hong, then 33, whose elder brother lived in Hong Kong, joined a tour in 1984. She returned with a schoolbag for her six-year-old daughter. It was the family's first souvenir from overseas travel.

"What impressed me the most was the metro," Liang recalled, "People just swiped their IC cards and boarded the trains. The technology was beyond my imagination."

Liang's hometown Guangzhou did not have a metro line until 1997. Now the city has the fourth busiest metro system in the world, where passengers can scan a QR code to ride their trains. The country's tourism industry has also been prospering over years, and Liang has been to over 30 countries and regions around the world.

Instead of a consumer, Liang considers herself a student on the road, who wishes to see the world as much as possible.

Together with three friends, she celebrated the new year in Peru this year. These four grandmothers, with an average age of 69, speak neither English nor Spanish, but they managed to travel to the United States, Peru, Argentina, and Chile in 35 days and even reached Ushuaia, the southern most city in the world.

Two months after the trip, Liang visited India with her husband, and is planning to tour Israel and Jordan later this year.

"My daughter helps me with the visa applications, and I would book all the accommodation and transportation online beforehand," Liang said, "I save pictures of all my destinations on my mobile phone, so whenever I take a taxi or ask for directions I just show the pictures."

Favourable visa policies, online booking services, and mobile payment have enabled Chinese travelers like Liang to explore other cultures freely and easily. While traveling has truly become a lifestyle for some Chinese.

Jiao Jiawen had always wanted a special wedding. The 30-year-old Beijing resident is a huge fan of Japanese architect Tadao Ando, and therefore planned a ceremony at one of Ando's famous works -- the Chapel on the Water in Hokkaido.

She invited some 20 family members and friends to fly over to attend the wedding, which was held in accordance with the chapel's conventions.

"Almost all of the guests had never been to Hokkaido before, so it felt like we were actually traveling and got married by the way," Jiao said, "The wedding was very ceremonial, following the local traditions. It was a fantastic experience."

"Reform and opening-up has brought about drastic changes to the lives of Chinese," Yue Yong said. Chinese tourists have been embracing various cultures, and are also contributing to globalization on the road.