Over 55,000 visitors to leave Wuhan by train on Wed, 40% heading to Pearl River Delta Region: authority 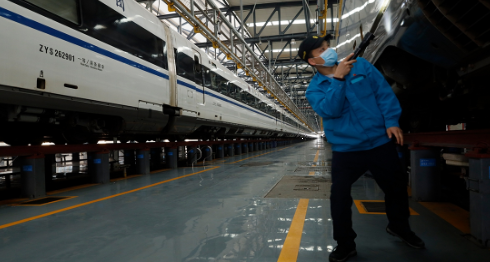 Over 55,000 people are estimated to be leaving Wuhan, the capital city of Central China's Hubei Province, by train on Wednesday - the first day of lifting outbound traffic controls since the novel coronavirus outbreak began, most of whom are heading to the Pearl River Delta, China's manufacturing hub and most economically dynamic region.

Authorities will lift the city lockdown on Wednesday, signaling the resumption of work and return to normality after 76-days of isolation, which has largely helped delay viral transmission from Wuhan to other places in China.

Starting from 00:00 am on Wednesday three railway stations in Wuhan would restart rail services, and travelers with green health codes would be able to travel by train after undergoing temperature screening and identity checks.

The health code indicates that the holder is clear of infection not having any close contact with suspected or confirmed cases of novel coronavirus pneumonia (COVID-19).

Regarding ticket sales on Tuesday, in total more than 55,000 travelers would depart from Wuhan by train, and 40 percent of them heading towards the Pearl Delta Region, which is also home to hundreds of thousands of factories attracting migrant workers from across the country.

More than 80 trains at the Wuhan station are ready to resume operation, according to local authority. The first train to leave Wuhan station to other regions will be departing for Nanning, Southern China's Guangxi Zhuang Autonomous Region at 7:06 am. On Wednesday, 276 trains departed from stations in Wuhan to other cities such as Shanghai, Shenzhen in Southern China's Guangdong Province and Chengdu in Southwest China's Sichuan.

The railway department carried out comprehensive disinfection work of the entrance and exit passageways, ticket offices, waiting rooms, platforms and more than 230 bullet trains at Wuhan railway stations in advance, as well as finalized repairs, maintenance, renovations of passenger transport facilities and equipment work before the city lockdown was lifted.