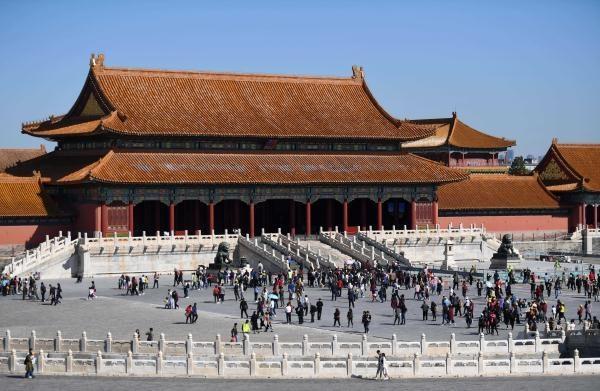 BEIJING - When Christopher Allen visited the Palace Museum for the first time in 2008, he was overwhelmed.

"It felt like you were hit by hundreds of years of history," he said. "With so much to see, one visit is not enough."

Over the next decade, the Beijing-based English teacher has paid two more visits to the museum and has grown to appreciate its history and culture.

The Palace Museum, also known as the Forbidden City, is one of the most visited museums in the world and tops the must-see tourist destinations in China.

With its long history, rich culture and convenient facilities, the complex has attracted numerous overseas tourists to see its halls, palaces and gardens.

During this year's May Day holiday, the museum received another 320,000 visitors, with many of them coming from outside China.

Dagmara Bahoria, a 41-year-old from Poland, works as a part-time tour guide for a Polish travel agency and has paid about 50 visits to the Forbidden City.

During the holiday, Dagmara came with another group of Polish tourists, introducing to them the architecture, history and anecdotes of the Forbidden City.

Dagmara paid her first visit to the site in 2012. "It was a dream from my childhood to see the Forbidden City, and the feeling of actually seeing it is one of the best," said Dagmara, who became a fan of Chinese culture and the Forbidden City at the age of 12.

"The name Forbidden City sounds really mysterious. With its history hidden for so many years from outsiders, I feel like I'm time-traveling when I go inside," she said.

But the Forbidden City is no longer off-limits to outsiders. Instead it is becoming more friendly to foreign visitors, as Dagmara has noticed.

"The audio guide system for rent at the museum even has a Polish language channel, which is rarely seen in other tourist sites in the world," she said.

Dagmara hopes the Palace Museum can open more areas to the public.

A target has been set by the museum to open 85 percent of its areas, compared with the current 80 percent, according to former curator Shan Jixiang.

Only 30 percent of its areas were accessible by the public in 2012, when Dagmara paid her first visit.

Christopher was also able to show his family around the Forbidden City when they visited China. He also bought cultural products from souvenir shops at the museum.

His favorite product is the Palace Museum Calendar, which he usually brings to his Chinese classes to study the Chinese characters on it with his teacher.

"With this calendar, it's like I've brought culture and history home," he said.