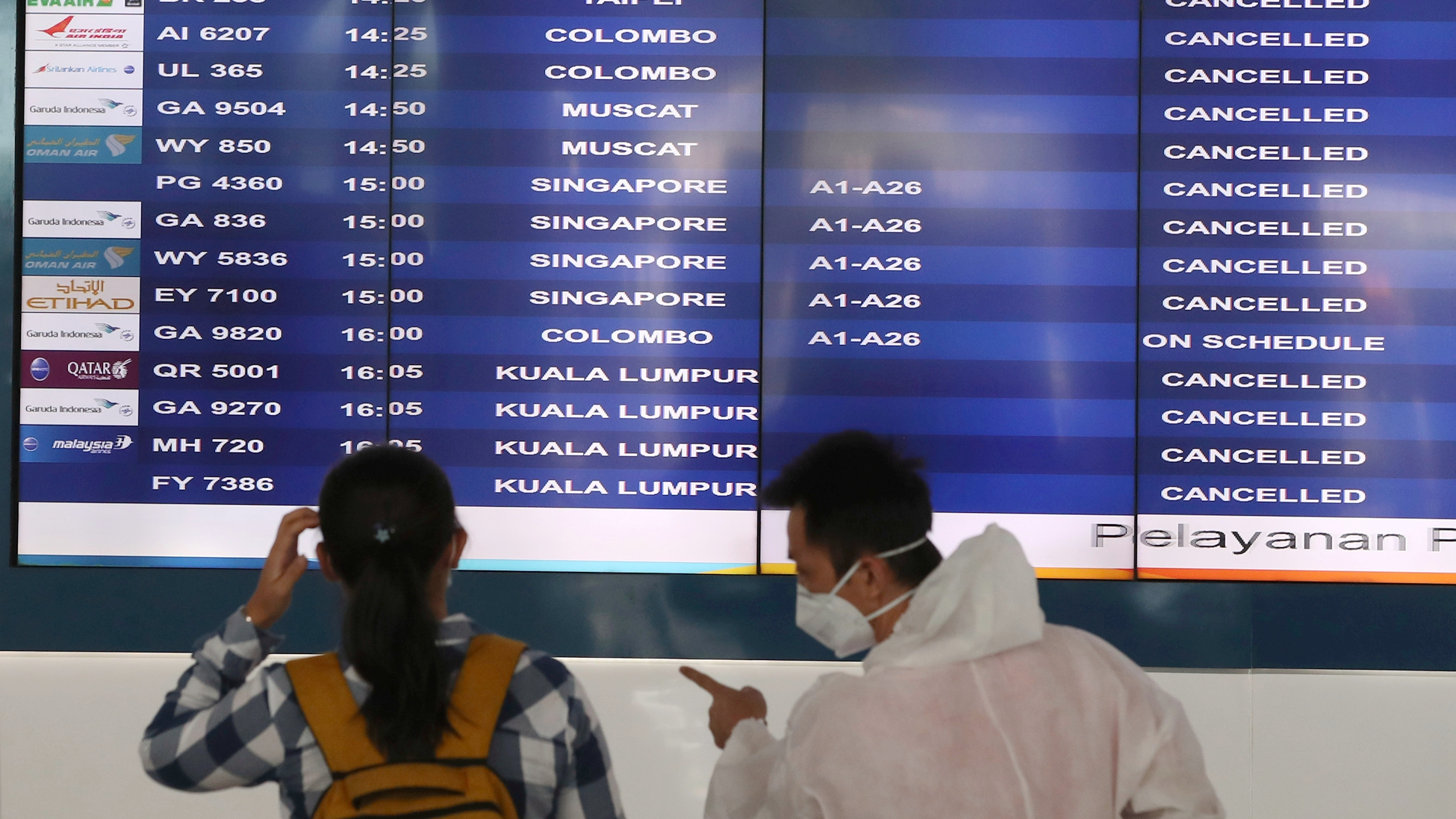 People watch an information screen with most of the flights showing cancelled at the Soekarno-Hatta International Airport in Tangerang, Indonesia, April 24, 2020. (Photo: AP)

For many people, travel insurance has been little more than a box that pops up on a booking site to offer some cheap peace of mind. But the coverage's limitations have been brought into stark relief during the coronavirus pandemic, leaving would-be travelers frustrated over denied claims for hundreds – if not thousands – of dollars.

Plane tickets, vacation homes and other excursions are going uncovered even though some say they couldn't have reached their destinations because of ski resorts shuttering, beaches closing and governors urging everyone to stay home.

Ed Svec, 67, said he was shocked when his insurance company rejected his claim for a condo rental of 5,100 US dollars in Colorado that he booked for a late-March ski trip but had to cancel because the resort was closing.

"I was being advised by the governor that people in my age group should stay away from the area," said Svec, who lives outside Cleveland. "But then the decision was made for us."

Basic travel insurance policies generally don't cover pandemics or fears of getting sick. And plans often have a very specific list of covered reasons for cancellation, such as losing a job or a terrorist attack.

Although the policy language isn't new, many who purchased plans assumed that virus-related cancellations were covered. Others complain the policies are difficult to understand.

"The contract was like 10 pages of small print, and I'm not a lawyer," said Svec, who retired as an accounts manager for a multinational company.

Last month, Illinois Congressman Raja Krishnamoorthi raised concerns about denied claims, warning that "companies should not be profiteering off this crisis."

Krishnamoorthi has been asking three travel insurance companies to release virus-related claims information to the US House Subcommittee on Economic and Consumer Policy, which he chairs.

"The evidence shows consumers are purchasing standard travel insurance products, thinking they will be covered if they cancel their trip because of coronavirus," the congressman said in a statement last month. "Yet, companies like Allianz, Travel Guard, and Generali are refusing to cover those claims."

Laura Campbell, 48, of Richmond, Virginia, has rented a beach house on North Carolina's Outer Banks as a "last something" to celebrate a high school graduation that was cancelled. But now she's wondering if they can even go because North Carolina's Dare County has barred visitors.

Campbell has no idea whether the visitor ban will be lifted by mid-June. And the travel insurance company has already told her that it won't cover the 4,000-US dollar cost of the rental.

"It doesn't make sense," she said. "Nobody asked for this virus."

Travel insurance is unlikely to be a major priority for lawmakers given the pandemic's widespread damage to the economy, said Michael McCloskey, an associate professor at Temple University's Fox School of Business.

Virus exclusions have been part of various insurance plans since the SARS epidemic. Government regulators – mostly on the state level – have knowingly approved such exclusions for years.

"If you made the insurance companies cover pandemics, they would all go bankrupt or the premiums would skyrocket," McCloskey said. "Insurance never works when everybody has a claim. It only works when only a few have it, and we all share it."

Meanwhile, people whose cancelled trips went uncovered are now haggling with vacation homeowners for refunds or getting vouchers for flights they may never take.

Svec, who had booked the ski trip in Colorado, was eventually able to recoup half of what he paid from the owner of the condo.

"At that point, I thought 50 percent of something was better than 100 percent of nothing," Svec said.

But he said they will "likely limit their risk by placing limits on payouts." He added that such policies are also likely to be "quite pricey."