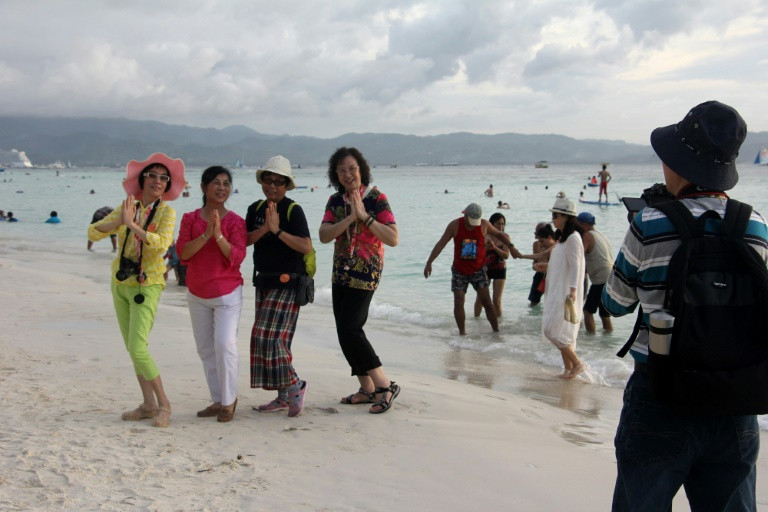 The Philippine tourism industry scrambled Friday to manage the fallout from the temporary shutdown of its world-famous Boracay island, which threw into chaos trips planned by hundreds of thousands of tourists.

President Rodrigo Duterte ordered the once-idyllic white-sand resort closed to tourists for up to six months from April 26, after describing the country's top tourist attraction as a "cesspool" tainted by raw sewage.

Checkpoints manned by police or soldiers will be set up at piers to turn away visitors.

Hundreds of Boracay hotels, as well as restaurants, tour operators and business establishments were on Friday unwinding bookings for rooms, flights, weddings and other events and facilities.

"I hope (there will be) no mess and no chaos," she added. "We just want it to be orderly."

Ibarreta said "hundreds of thousands" of bookings made as far as two years in advance -- potentially worth millions of dollars for hotels and other tourism services -- would have to be either cancelled and refunded, or rebooked.

"Some people are okay but some people cannot understand," tour operator Clang Garcia told AFP, adding clients are typically offered a refund or an alternate destination "to save the account".

Domingo Enerio, the retired former head of the government's Tourism Promotions Board, said some of the cancelled bookings had non-refundable clauses and must be renegotiated or credited for future use.

The government plans police, or even military, checkpoints at ports to keep tourists away from the tiny central Philippine island that draws two million visitors each year. Residents will get passes while Boracay is rehabilitated.

Domestic airlines announced on Thursday they would scale back the number of flights to the jumping-off point for the 1,000-hectare (2,470-acre) island.

Industry leaders say Boracay accounts for about 20 percent of the country's tourism revenue and fear a longer-term fallout.

"Boracay will definitely take a hit and the Philippine tourism industry will take a hit," said Enerio, the former tourism official.

Beach weddings, typically held at sunset for barefoot couples in bohemian costumes, were an immediate casualty.

Wedding planner Ronald Soncio said 19 of his nuptials over the period involving mostly western couples had already been cancelled, with five others moved out of Boracay.

"It's difficult because our next wedding is a month away.... it's bloody," Soncio told AFP.

Wedding photographer Donnie Magbanua said his three wedding shoots in Boracay in May were now in peril, while enquiries and reservations for his services had dried up.

The threat of closure first emerged in February when Duterte accused the island's businesses of dumping sewage directly into surrounding turquoise waters.

Ibarreta, the hotel industry official, said some of Boracay's 17,000 resort workers would be lost in the ban.

"So we'll have to retrain people (after the ban is lifted) and that's expensive," she added.

The authorities plan checkpoints manned by police or soldiers at the piers to keep out tourists, who arrive at nearby airports, but will not close businesses to avoid lawsuits that could hamper rehabilitation.

Assistant Secretary for the Interior and Local Governments Epimaco Densing told reporters barring tourists was "an issue of the state exercising its valid exercise of police power".

"Someone has to compensate them or frankly they will find ways around," Raffaello Pantucci, a security expert with British-based RUSI, think tank told AFP.

"But as far as I know the Philippine government is not incredibly flush with cash and I imagine that would be quite an expensive endeavour to do."