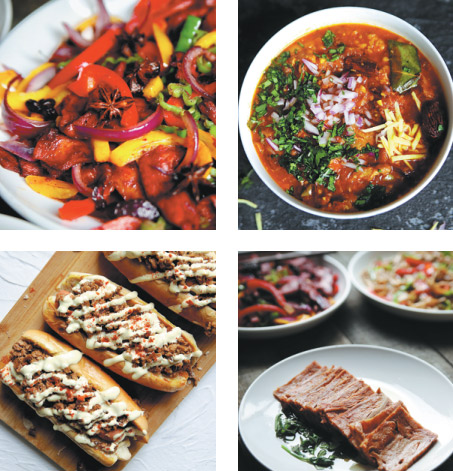 MeatFest provided a wide variety of vegan "meat" dishes made by some of Shanghai's best-known chefs. (Photo provided to China Daily)

People who want to cut down on cholesterol, reduce their carbon footprint or express compassion for animals but seem unable to quit eating meat may have found some answers at a recent exhibition called MeatFest.

They created a feast using "mock meat," a Chinese culinary tradition dating back more than 1,000 years, according to Eve Samyuktha, the exhibition organizer and founder of a charity called Vegans of Shanghai.

Food is an indispensable part of Chinese culture. As early as the Tang Dynasty (618-907), compassionate people invented "mock meat" from tofu and vegetables, a tradition that has lasted until the present day, Samyuktha said.

The mock meat tradition has grown evermore popular in modern cuisine as plant-based, whole food diets and vegan lifestyles hit the mainstream across the globe.

Plant-based meat is derived entirely from protein-rich plants, such as beans, legumes, seeds and vegetables, but it is textured and flavored to mimic animal flesh, said Samyuktha, who is a chemical engineer by profession.

The purpose of these products is to help consumers switch from animal-to plant-based protein without compromising on taste, she said.

"We were inspired by how the Beyond Meat and Impossible Burger brands have changed the way meat is perceived in Western countries," she added.

As veganism hits the mainstream, brands such as Beyond Meat and Impossible Burger have become the rising stars of the food industry, backed by investors such as Bill Gates, Leonardo DiCaprio and Don Thompson, a former McDonald's CEO.

After studying these fashionable newcomers, Samyuktha was surprised to discover that their composition was nearly identical, with the exception of the plant-based heme released by leghemoglobin in soy beans that gives Impossible Burger's patties a blood-like color and taste.

In China several homegrown plant-based meat companies have inherited the long tradition and have been developing products to cater to local and international demand.

"'Plant-based meats in China: Already available, easily accessible and widely affordable': That's the message we wanted to put out at the MeatFest by bringing these local brands into the spotlight," Samyuktha said.

In 1993, Whole Perfect Foods, a vegetarian food company, brought an advanced production line of soy protein isolates from Germany to the Chinese mainland.

The company has created more than 500 types of plant-based products, and its menu keeps evolving.

From vegan "pork", "beef' and "seafood" to a variety of sausages and snacks, protein from different plants is used to satisfy different needs for a meaty taste, according to Xue Hongjun, the company's executive director.

The food is often described as too good to be fake. "We have spent 30 years doing just one thing. That is what makes us different," Xue said.

Plant-based alternatives to animal protein are gaining popularity as an ideal way of reducing the negative health and environmental impacts of industrial-style animal husbandry.

In recent years, research has identified animal-based agriculture as one of the leading causes of climate change, soil erosion, water pollution and the decline in biodiversity.

Studies conducted last year showed that more than half of the world's oceans are being fished industrially and that commercial fishing covers a larger area than global agriculture.

The Living Planet Report 2018, published by The World Wildlife Fund, indicated a 60 percent decline in biodiversity in the past 40 years. In other estimates, 20 percent of the Amazon rainforest has been cut down in the past 50 years, mainly to raise cattle or grow soy for animal feed.

Beyond Meat and Impossible Foods received the 2018 Champions of the Earth award-the UN's top environmental accolade-for their ingenious plant-based alternatives to meat.

In China, respecting nature and cherishing life has long been an important part of traditional ethics, according to Qiu Renzong, a member of the Chinese Academy of Social Sciences.

Meanwhile, experts and entrepreneurs at the Next Gen Good Food Forum, organized by venture capitalists looking to promote plant-based or clean meat solutions in China, said that with ancient traditions and new business opportunities both in play, the country is set to become the next central stage for a dietary revolution.

Kelly Chen, co-founder and owner of a vegan fitness center in Beijing, said, "In China, the older generations are familiar with the mock meat tradition, while younger people are following the rise of veganism as an international novelty."

In September, Chen and 100 other vegan businesses hosted the Pop Plant-Based Festival in Beijing, which attracted more than 10,000 visitors over three days.

By contrast, the MeatFest in Shanghai did not focus simply on vegans and vegetarians, but also welcomed meat eaters so they could try eco-friendlier versions of the food they enjoy.