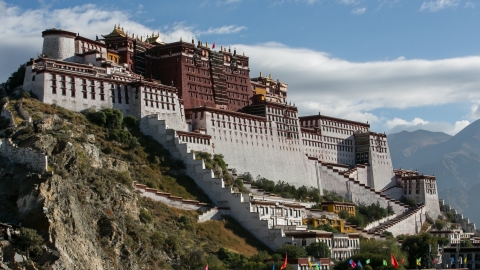 The palace opens every day except during its annual facelift in winter.

Due to the heavy snow, the steep stone stairs leading to the Potala Palace atop a hill became slippery, according to a statement released by the palace's administrative office late Tuesday. All the staff workers were mobilized to clear the snow.

This winter's first snow in Lhasa came early Tuesday morning and did not stop until Wednesday morning. The city saw 10 cm of snow, according to the regional meteorological bureau.

The Potala Palace was built by Tibetan King Songtsa Gambo in the seventh century and was expanded in the 17th century.

As one of China's top tourist destinations, the palace was included on the UNESCO World Heritage List in 1994. It received 1.45 million tourists in 2017.