TRAVEL Pouring forth from the desert

Pouring forth from the desert 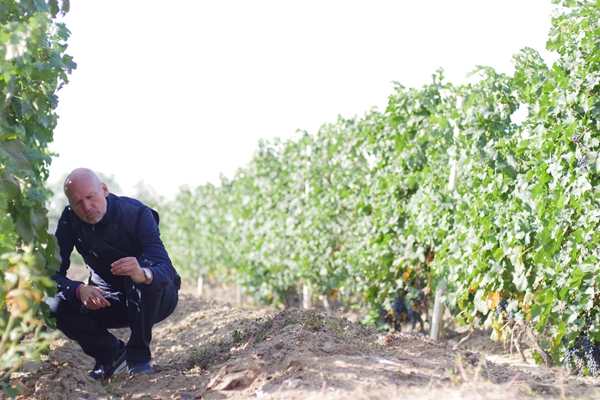 Chateau Changyu Moser XV is innovating to make the most of its grapes, whose special properties come from their unique terroir in arid Ningxia, Li Yingxue reports.

It was Moser's latest harvest in the past five years-about a week later than usual. He'd waited until the sugars and tannins were perfect.

"The intensity of the fruit was expressive as never before. They were the best grapes I have ever worked with in Ningxia," he says.

The harvest lasts for around two weeks, during which many people work 14 hours a day, seven days a week. It's the most important time of year for the chateau. Moser walked around 15,000 steps between the vineyard and the winery every day this season.

The grapes are sorted and fermented after harvest. After two years in French oak selected by Moser, the wines are ready to meet the world. Moser hopes they'll shine in the Chinese and global markets.

Moser belongs to the 15th generation of Austria's famous Moser winemaking family. He came to China in 2005.

After working with Changyu on sales and marketing for 10 years, he realized that, even though it had become the biggest wine company in China, it was not successful internationally.

He brought with him all his experience, from growing grapes to bottling.

He even sold his winemaking business in Europe so he could concentrate on the chateau in China.

Chateau Changyu Moser XV was founded in 2013 with the vision to bring the "best of China" to the world.

Changyu invested around $77.2 million to build it. The chateau houses 1,500 barriques in its cellar and high-tech facilities, including the bottling line.

Every stage of production takes place at the chateau, including viticulture, pressing, fermentation and maturation.

The compound also hosts a museum dedicated to the history of Chinese winemaking and of Changyu since its founding in 1892.

It's located near Ningxia's capital, Yinchuan. The area is ideal for growing grapes because of an altitude of 1,100 meters, cool nights and over 3,000 hours of sunshine annually.

The chateau was under construction when Moser first visited Ningxia in 2011. But the grapes impressed him.

"This is why I fell in love with this country-because this is the smallest cabernet sauvignon that I've worked with in my life," he says.

"When you see the small berries, you immediately know you will make good wine. The smaller the berry, the better. Also, in Ningxia, the days are warm, and the nights are cool, which can keep the freshness of the grapes."

Ningxia's desert climate causes the fruit to grow thick skins to prevent evaporation. And tannins and taste are extracted from the skin, he explains.

The vines are buried before winter to protect them.

"On the other hand, because you bury them, which gives them four months of uninterrupted sleep, they end up growing faster the next spring," Moser says.

The first change Moser introduced when he started at the chateau was to delay the harvest, which elevated the wines' quality.

"We postponed the harvest time by 10 days. When I see the sugar is right, the grapes taste great, and when the seeds are brown, not green, it's about time to harvest."

Moser believes the seeds' color and flavor are crucial. He chews them to see if they taste nutty enough for harvest.

Ningxia's wines used to be about 12 percent alcohol content, but delaying the harvest enabled the seeds to turn brown and the alcohol content to increase to around 14 percent.

It wasn't easy to persuade others to wait at first. If Moser was wrong, the whole year's work would be ruined.

Serendipitously, two rains arrived around the normal harvest time, which naturally stopped workers from gathering the grapes. And, in the end, the fruit was better than before.

Moser visits the chateau several times a year, including just before every harvest.

Before he arrives, his colleagues send him photos of seeds and other information, including sugar concentrations, on a weekly basis.

"Winemaking is not just one person. It's a teamwork," says Moser, who works with a well-trained all-Chinese team.

"All I have to do is bring my international experience to the chateau. We only produce and bottle what I believe is right for the global market."

About half of the chateau's wine is exported to over 40 countries and regions, including the United Kingdom, Italy, Germany, Canada and Singapore.

"Ten years ago, when I said I want to bring our wines from China to the world, nobody was listening," he says.

"Now, our wines are sold in the finest hotels and restaurants in London, such as the Mandarin Oriental and Four Seasons. We want to make the best wine of China, and we need also to make wines belonging in the company of the world's finest.

"Today, I can probably say we have achieved a lot of these goals already, because when I do a tasting in Europe, I always have a bottle of nice French wine or even Argentinean wine on the table to prove the point that we have the right to be on the same table."

Moser also wants to bring Chinese wines, including other companies', to the global market.

"We have a long way to go because we are at the beginning," he says.