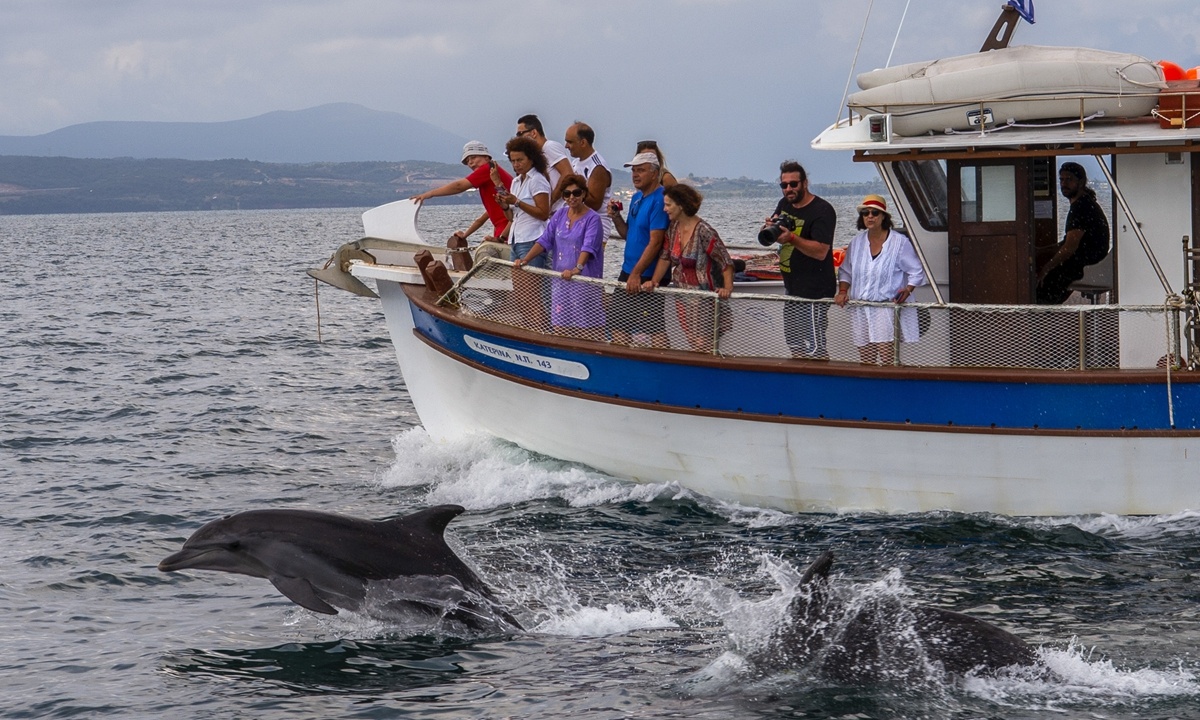 Tourists take pictures during a dolphin watching tour from a boat in the Ambracian Gulf, in Preveza, northwest Greece, on August 6. Photo: AFP

Yannis Yovanos scans the waters of the Ambracian Gulf with his binoculars for dolphins shooting into the air before curving back down into the sea.

His early warnings prompt just a dozen tourists on the deck of Yovanos' small boat to scramble for their smartphones, hoping to secure a snap of the aquatic mammals' aerial acrobatics.

Officials in his hometown of Preveza hope that it's just this kind of small, family-run business that will help them overcome the coronavirus' impact on travel - while sparing the region the environmental impact and economic distortions of the mass tourism more common on Crete or the Ionian islands.

"We don't want to stay all day on a beach, we're looking for a different experience," said Dutch tourist Frederika Janssen.

"The pandemic is an opportunity to promote alternative tourism, fishing tourism," as well as local life and culture "directly related to the natural resources that date from antiquity," said Constantin Koutsikopoulos, who heads the agency charged with managing the Ambracian Gulf.

Inside the gulf is a protected wetlands park, some 400 square kilometers that is one of Europe's Natura 2000 wildlife diversity regions.

One hundred and fifty dolphins, Loggerhead sea turtles and 300 species of aquatic birds including the rare Dalmatian pelican live in the lagoons and reed beds of the gulf.

Nestled between green hills, the Ambracian Gulf is fed by rivers descending from the mountains of the Epirus region of northwestern Greece.

Yovanos' hometown guards the little strait that connects the gulf with the Ionian Sea. Dolphin-watching trips like these mean "I am realizing my dream of living the life of a fisherman among our natural riches," said the 49-year-old

No scramble for beach spots

For Greece as a whole, a gamble on reopening its borders to tourists as early as June appears to have paid off for now.

New coronavirus cases have appeared only slowly since then, with fewer than 6,000 cases and just over 200 deaths nationwide from the pandemic. Although Preveza has opted for a slower, more family-oriented approach to travel compared to better-known Greek destinations, it hasn't renounced Mediterranean holiday clichés altogether.

With the sector suffering a big hit from the coronavirus epidemic, Preveza city officials launched a promotional campaign, securing the title of safest place for a European beach holiday from website European Best Destinations. 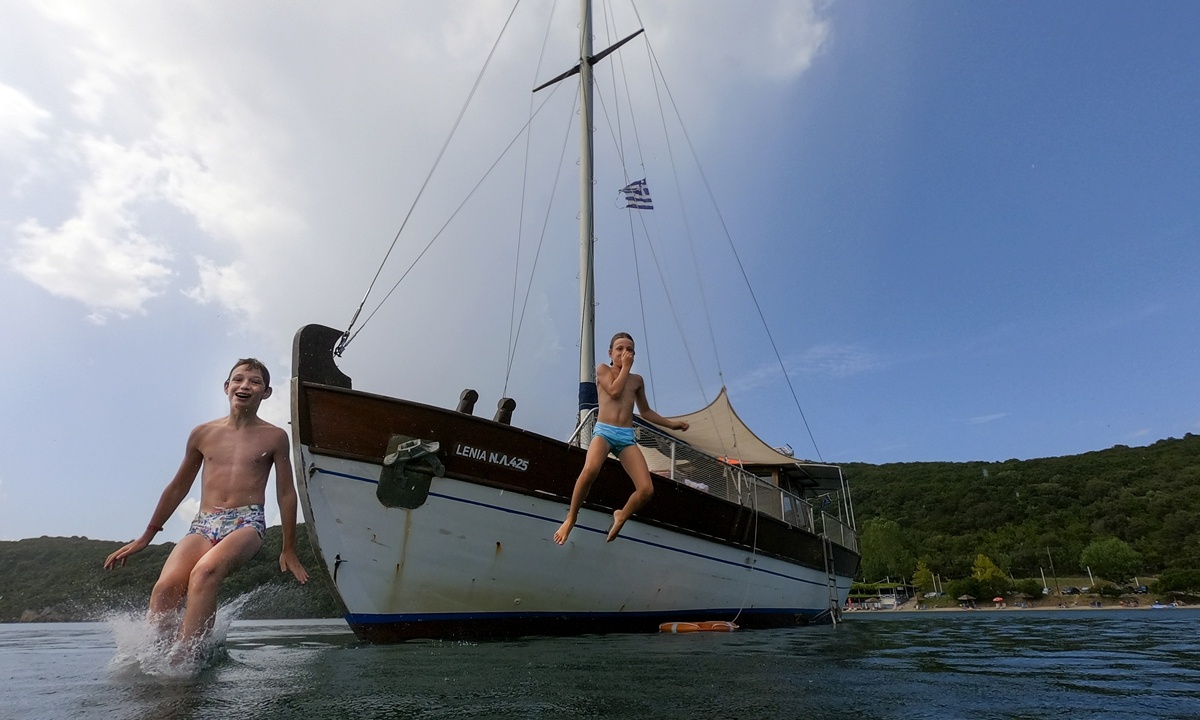 Tourists dive from a boat and swim during a dolphin watching tour in the Ambracian Gulf on August 6. Photo: AFP

"Monolithi beach, the main beach of Preveza, is... the longest one in Europe... you won't have to struggle to get a nice spot, fix your beach umbrella and spend relaxing days in the sun," it wrote. And new infrastructure in the shape of a marina has helped draw sailors away from packed ports on the islands.

"Preveza is the right place compared to Corfu which is a very nice island but very crowded," said Nick Ray, a British businessman, from the deck of his yacht that had put into the town's port.

With its fishing and fish farming, the Ambracian Gulf is already the region's economic motor.

Sustainable, environment-focused tourism should give the authorities even more reason to deal with the threats to the gulf such as pollution, poaching and illegal fishing.

There's even something for ancient history buffs in the ruins of Nicopolis, founded by Caesar Augustus in honor of his naval victory nearby in 31 BC, where some Roman mosaics are still preserved.

"The pandemic has shown us that we must respect nature and shift towards small-scale tourism, far from the classic slogan of 'sun and sea'," said Roula Trigou, an environmentalist and head of communications for Greece's ornithological society.

She believes the real challenge in developing travel is "making it benefit local society."

Elsewhere in Greece, the tourist trade has brought in money - often at the expense of attention to environmental protection and maintaining the character of destinations.

A European Parliament commission report last year upbraided Greek authorities for allowing over-tourism on the island of Santorini, warning the flood of visitors threatened to distort the island's character and social fabric.

Gulf manager Koutsikopoulos said that "with proper planning, the development of tourism is a reliable ally for the protection of the gulf" which suffers from intense human activity.

For now officials are keeping things low-key, with plans to clear paths in the reed beds to attract bird watchers.