TRAVEL Prime recreation spots could be altered by Arizona wildfire

Prime recreation spots could be altered by Arizona wildfire 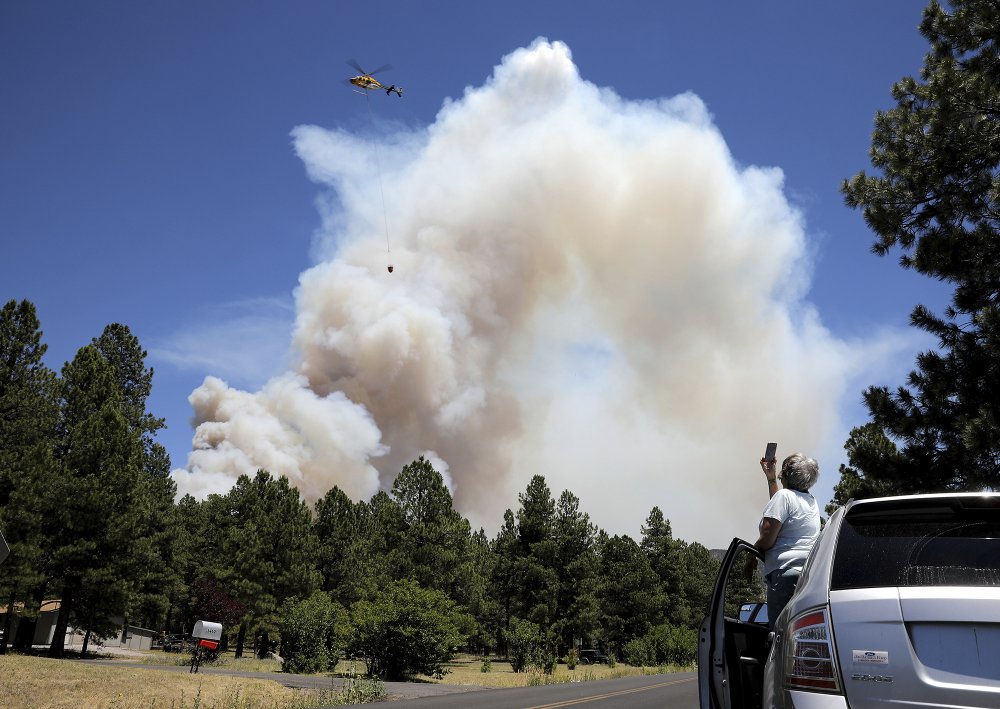 A helicopter carries a bucket of water to attack hot spots on the Museum Fire in Flagstaff, Ariz., Sunday, July 21 2019. (Photo: AP)

The labyrinth of trails welcomed the novice to professional mountain bikers. The elevation, the groves of aspen, the frogs croaking in shallow water and the sweeping views kept them coming back.

As a wildfire burns in a mountain valley outside Flagstaff, locals are wondering how the landscape will change.

“Those trails are probably cooked,” said Kyle Hornbeck, who owns a bicycle shop in town.

The fire has grown to 2.8 square miles (7.2 square kilometers) in the Coconino National Forest in a prime spot for recreation. Forecasters warned Tuesday that storm runoff could cause flooding in Flagstaff because of rain on the mountain watershed where the fire scarred forested slopes.

Thousands of other people living amid the country’s largest contiguous Ponderosa pine forest have been told to be ready to evacuate by packing three days of supplies.

Mountain bikers frequently ride the trails around Mount Elden to train for the region’s biggest races. The dirt tracks are within minutes of downtown Flagstaff, offering steep climbs in elevation, technical downhill riding and design-your-own loops.

The bikers often are the ones maintaining them, removing fallen trees and other debris, Hornbeck said.

“That’s where the good surf is, akin to that notion,” Hornbeck said.

For a while, a project to thin dense stands of trees and remove other debris kept the public out of a section of the trails in what’s known as Dry Lake Hills. When they returned recently, mountain bikers rode past piles of logs and branches still waiting to be picked up.

The fire started in that area, where campfires always are banned because of the threat of wildfire despite most of the national forest around Flagstaff being free of fire restrictions. Officials say the fire is human-caused but haven’t determined what exactly sparked the blaze.

The areas thinned by a mix of helicopter logging and crews with chain saws should burn cooler than a fire moving over the untouched landscape, said Jay Smith, forest restoration director for Coconino County. But, the concern remains for flooding.

“I’m curious to see if the thinning efforts did their job, what we intended them to do,” he said.

A top-tier federal management team took over the fire late Monday, bringing with it more resources to fight the blaze. At one point, more than a dozen aircraft, including four air tankers, were dropping fire retardant and water over the fire. Hundreds of people on the ground worked to build containment lines.

Firefighters are expecting much-needed rain Tuesday accompanied by what could be erratic winds at times that could shift the fire’s direction, a “mixed blessing,” said fire information officer Steve Kliest.

In a grocery store parking lot where smoke filled the air, Justina Ferrara and her grandmother shopped for a carpeted tree house of sorts for a cat. The women got a pre-evacuation notice and have set aside important documents, old photographs and treasured family heirlooms.

An air tanker flying behind them dropped a line of red slurry across the mountain top, trying to shield communications towers from the fire. Rain briefly hit the ground.

“It’s the devastation to what’s going on in the vegetation,” she said. “It’s not going to come back anytime soon.”