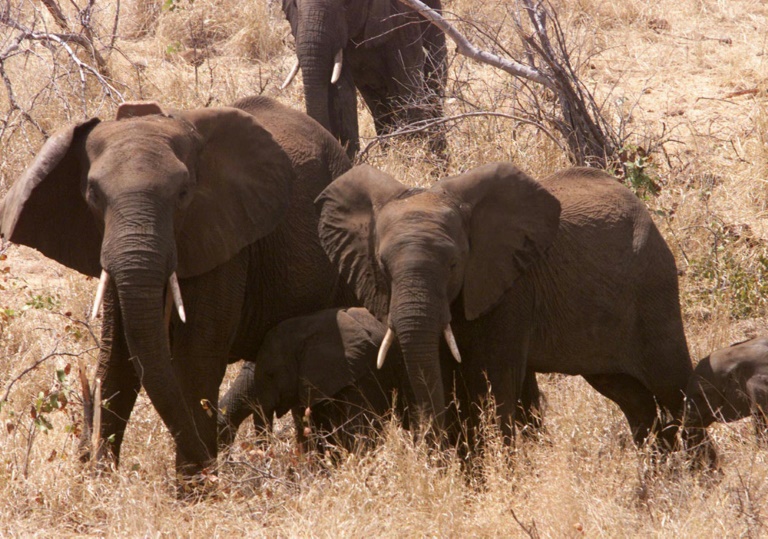 On one side of the Massingir dam in southwestern Mozambique is the vast Great Limpopo Transfrontier conservation area and its protected game animals.(Photo: AFP)

The dam at Massingir in southwestern Mozambique is like a bridge between two worlds, one a deadly threat to the wildlife in the other.

On one side of the 150-foot (46-metre) high dam lies the vast regional Great Limpopo Transfrontier conservation area and its protected game animals.

While on the other sits a town used as a base by those who hunt them illegally.

Set on the reservoir's southern shore, the town of Massingir has acquired a dubious reputation as a local poaching hub.

Organised criminal gangs use it as a rear operating base to procure supplies and launch incursions across the border running through the conservation area into South Africa's Kruger National Park to hunt rhinoceros.

"You've got these forces of conservation trying to conserve the wildlife, and you've got the crime syndicates that are in town and openly show their wealth, with lavish houses, and vehicles -- and there is no secret who these people are," said Peter Leitner, of the NGO Peace Parks Foundation, which supports crossborder protected areas.

Massingir could be a lucrative springboard for tourists to explore Mozambique's Limpopo National Park, which boasts lions, hyenas, buffalo and increasingly elephants and is part of the Great Limpopo Transfrontier Park.

Pursuing the conservation of its wildlife reserves after the ravages of the country's 16 year-long civil war is a priority for the Mozambican government.

But poaching remains a stumbling block, despite some progress.

Instead they host a handful of locals seated on tatty plastic chairs, looking out wistfully.

Youngsters mutter quietly about having already sneaked into South Africa, looking for work, so they say. Nobody speaks openly about the poaching that sustains the area, although evidence of the trade is all around.

"Sometimes we'll comment that one of our friends isn't here," admitted Mariama Alberio, a young English teacher who lives in a village close to the reserve.

"Sometimes it will be that he's in prison -- or that he's disappeared in the park."

More than 1,000 rhinoceros are killed every year on South African territory for their horns, which are highly sought after in China and Vietnam as an ingredient for traditional medicine.

South Africa and Mozambique, which together with Zimbabwe share the 37,000 square kilometres (14,300 square miles) making up the protected Great Limpopo park, have recently stepped up anti-poaching cooperation.

Border patrols have improved and a clampdown on poaching from the Mozambican side has had an effect.

Several years ago, more than 70 percent of the poaching in Kruger was estimated to have originated from Mozambique, but today most poachers come from the South African side, according to Leitner.

"Promoting conservation cooperation between the countries of the Great Limpopo has been an important factor in regional stability," said Julien Darpoux, the head of the French Development Agency (AFD) in Maputo which helps fund anti-poaching efforts in the park.

The Kruger National Park, founded in 1926, is the jewel in South Africa's tourism crown and is fiercely guarded.

But to the east, Mozambique's Limpopo National Park had to be painstakingly reconstructed after the 1976-1992 civil war.

Now though, animals have begun to return but the development of tourism, which could help fund further conservation, is still in its infancy.

Complicating the task is the presence of communities in the heart of the Limpopo reserve who settled before it was declared a wildlife conservation zone in 2001.

"Resettlement is important (so we) have a park that's competitive with other established national parks" with a return of all the so-called Big Five -- buffalo, elephants, lions, leopards and rhino, Leitner said.

So far three villages have been moved out of the inner park to an outlying buffer zone since 2011 and five others are due to follow in the coming months.

Residents and their animals are being moved to the buffer zone alongside the park in exchange for brick houses, new infrastructure, including irrigation for growing crops, and symbolic compensation of 2,400 Mozambique meticais ($40, 34 euros) per head.

"The residents are allowed to use the park's resources within the buffer zones in a sustainable manner and in cooperation with the authorities," said Thomas Meque Chauque, the scheme's community operations manager.

Additionally, said Chauque, barriers built in 2013 to protect the villages have helped cut by 70 percent clashes between humans and animals, such as crops being destroyed by buffalo and elephants, or occasional lion attacks on cattle.

Local people have also benefited from what growth in tourism there has been, receiving 20 percent of all profits earned by the reserve.

But the scheme is not without its critics.

Residents of Mavodze, the reserve's largest village, are due to be moved and have protested regularly by blocking the main track through the park.

They have accused park officials of reintroducing lions to force them to accept resettlement on unfavourable terms.

Park managers, meanwhile, suspect poaching gangs of whipping up tensions -- but there are signs that their patience is paying off.

In dense bush less than 10 kilometres (six miles) from the South African border, Mozambican rangers have occupied a former school in Massingir Velho village which was moved in 2016.

They say that animals have returned in significant numbers.

English teacher Alberio has been delighted by the change and hopes it will raise awareness.

"As a teacher, I would love to take my students to the park to show them how the animals live and how they are being protected," she said.