Qinghai Province introduces itself to Bulgaria

Over 200 photos and traditional handicrafts were on display at the Touching the Magic of Qinghai exhibition held at the Confucius Institute in Sofia, Bulgaria, on Tuesday. 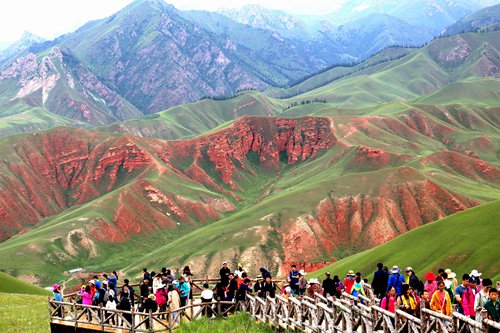 The exhibition was held under the auspices of the Belt and Road Initiative, said Liu Wei, deputy head of the publicity department of the Communist Party of China Qinghai Provincial Committee, in his opening address.

While people are familiar with big cities in China, the sparsely-populated Qinghai Province in Northwest China has a modest media presence and needs more efficient promotion, Liu said.

Liu said he hoped that this exhibition would serve as a cultural bridge between Qinghai and Sofia, Europe and the world.

Guan Xin, cultural counselor at the Chinese Embassy in Sofia, said that for those who live in large cities, Qinghai emanates an enticing charm.

He said he hoped that this exhibition would help more Bulgarians become interested in Qinghai and fully experience this magical world of beauty.

Rositsa Veleva, a visitor to the exhibition, told the Xinhua News Agency that she found it very interesting.

"I really liked that besides the beautiful natural scenery, there are many pictures of customs, traditions and people who live there," Veleva said.

She said she was especially impressed with the Thangka painting shown at the exhibition.

"There are photos of the process of making these paintings. It is a very precise and very labor-intensive method. The result is fantastic," Veleva said.

Thangka is a Tibetan Buddhist scroll painting on cotton or silk with mineral and organic pigments.

The art form dates back to the 10th century and paintings typically depict various Buddhist deities.