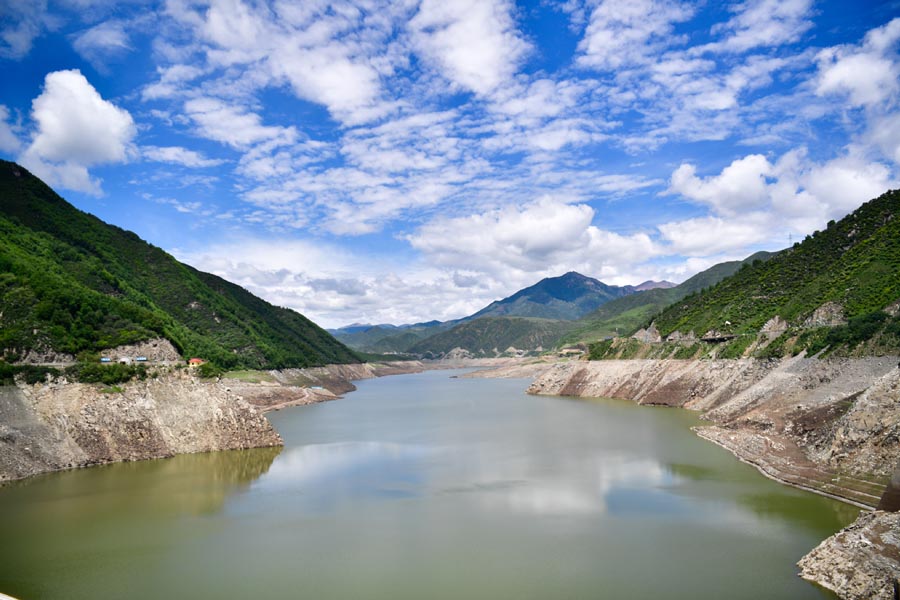 The ecological environment of Qinghai has seen significant progress in recent years as the local government steps up efforts to tackle pollution.

Home to headwaters of China's three major rivers - the Yangtze, the Yellow and the Lancang - Qinghai is hailed as the "Water Tower of China", playing an important role in the country's overall water ecology: it exports more than 60 billion cubic meters of water annually to over 20 provincial areas across the country.

Amid enhanced efforts to address environmental problems over the years, more than 94 percent of Qinghai's water quality was measured at, or above, Level III of the country's five-level water system in 2018, according to data from Qinghai's provincial department of ecology and environment. This means the water is suitable for human consumption. That figure was more than 10 percent higher than the country's assessment target of 84.2 percent.

Heiquan Reservoir, located in Xining's Datong Hui and Tu autonomous county, serves as an important water source for people in Qinghai: it supplies water for more than one million residents.

To ensure water safety, the local government has taken a series of measures such as relocating residents near the reservoir and barring chemical vehicle traffic.

"Since 2014, the government has spent 240 million yuan ($35 million) to relocate more than 2,900 people in three villages near the reservoir," said Long Xizhou, deputy county chief of Datong. It includes surrounding facilities that may cause pollution, such as schools, restaurants and petrol stations.

Zhou Min, a chief engineer of Xining's water supply group, said the reservoir's surface water has a rating of Level II. "It's good quality. The reservoir's water quality center carries out daily, monthly and semi-annual inspections. The tests help us understand changes, so as to improve our production processes and ensure quality," Zhou noted.

China's revised Water Pollution Prevention and Control Law, which took effect in January 2018, stipulates governments above county level should publicize information on drinking water quality at least once per quarter.

Statistics from Qinghai's ecology and environment department show the province has built 52 sewage treatment plants in total, covering all counties.

For example, the sewage treatment plant at Huangyuan county, Xining city, has been making contributions to the treatment of domestic sewage of more than 1.3 million local residents since its establishment in 2009. After further upgrading facilities and technology in 2018, the plant now processes 8,000 to 12,000 tons of water per day, according to Li Xin, a project manager at the plant.

Livestock and poultry breeding is an important industry in Huzhu Tu autonomous county in Haidong city, and dozens of livestock and poultry farms are based near the Huangshui River — a tributary of the Yellow River, known as the "mother river" of Qinghai.

To reduce water pollution, local authorities banned all breeding activities within 400 meters of the Shatangchuan River (a tributary of the Huangshui River) in 2017. A total of 32 farms were relocated to places far from the water source, according to Kong Xiaoyu, a deputy to the National People's Congress.

"Water quality of the river improved significantly after the rectification," she said.