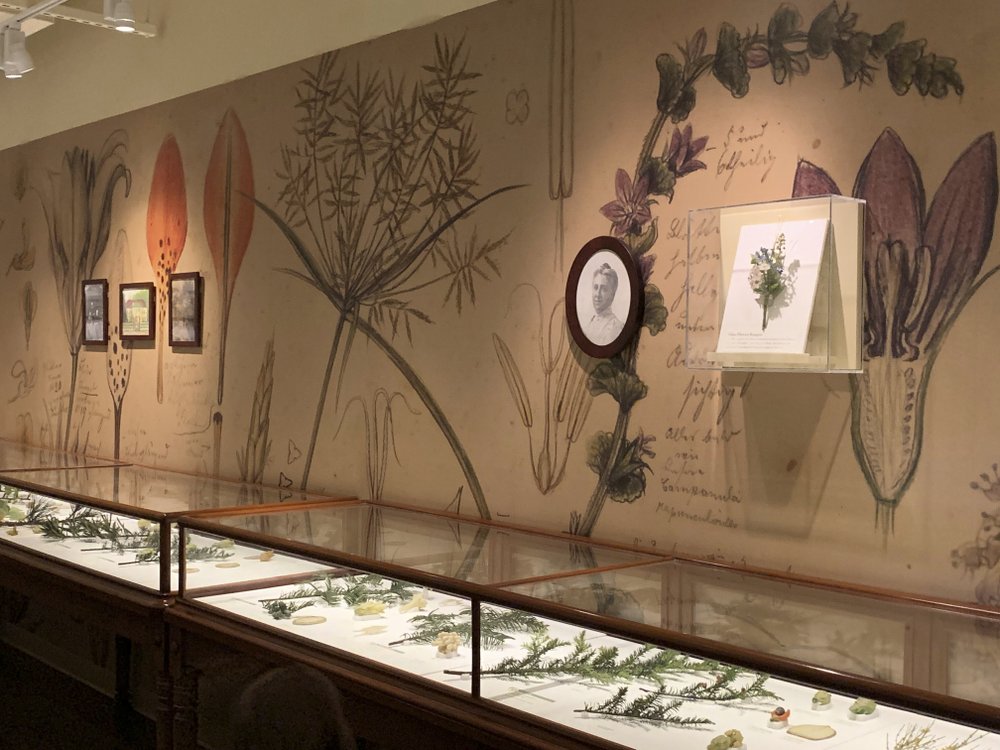 This Oct. 8, 2019 photo shows one wall of the Glass Flowers exhibit at the Harvard Museum of Natural History in Cambridge, Mass. (Photo:  AP)

Tucked inside a museum on the Harvard University campus is a gallery teeming with plants so lifelike in appearance you’d be forgiven for swearing they’re real.

But this foliage is glass — really old glass.

There’s a red maple branch, for instance, that looks plucked from a Vermont tree during the fall peak season. There’s part of a budding cashew tree boasting two rust-colored cashew apples and drooping nutshells, each leaf vein and stem intricate in detail.

These are only two examples of more than 4,300 individual glass models in the collection, which has at least 780 species from the plant kingdom represented. They are affectionately known as the “Glass Flowers,” or formally as the Ware Collection of Blaschka Glass Models of Plants.

The detail and the anatomical exactness stuns onlookers like Erin Averill, a 26-year-old from Orange County, California, who was recently perusing the flowers.

“My first thought was that they’d be similar to Dale Chihuly’s work,” she said. But the Glass Flowers are understated in color and size when compared to Chihuly’s colorful, often towering sculptures.

“I’m really blown away by just how real they look and the level of skill demonstrated in the details,” Averill said. “This is really a lost art form.”

The Glass Flowers date back to the 19th and early 20th centuries, and were intended to dazzle the public while educating botany students. They have been on display continuously at Harvard since 1893.

This third-floor gallery at the Harvard Museum of Natural History is one of the institution’s most beloved — and most visited — treasures. The Glass Flowers helped draw about 300,000 people to campus last year, a significant number for a college museum situated in an urban area known for its art offerings.

“I’ve been at the museum for three years and in that time I’ve counted visitors from 54 countries,” said Lewis Bushnell, a Cambridge resident who volunteers inside the gallery one day a week.

In August, an array of rotting fruits, rendered in glass, was pulled from the storage room shelves. On display for the first time in 20 years is “Fruits in Decay,” a temporary exhibit until March 2020. Among the decaying lot is an apricot showing signs of brown rot caused by a fungus, a strawberry covered in mold, and a bruised pear, all in great detail.

The flowers’ story of origin is equal parts ingenuity and happenstance.

In the 19th century, there was no reliable medium for modeling or preserving plants to study. Wax was used, but its temperature was always a concern. Plants could be pinned to papier mache boards, but over time the specimens’ shapes and colors often became distorted.

This is when Harvard professor George Goodale heard of Leopold and Rudolph Blaschka, a father-son team of glass artists living outside Dresden, Germany. Goodale was aware of some small marine animals the Blaschka had made in glass. So he sailed across the Atlantic to speak to the artists, and commissioned his first glass model in 1886.

Leopold, the father, died in 1895, but Rudolf finished the job, dying three years after completing the last flower. All the decaying fruits were Rudolf’s creations.

“They worked from nature, so they knew and studied plants,” said Donald Pfister, a professor of systematic botany, and curator of Harvard’s Farlow Library and Herbarium of Cryptogamic Botany.

Sometimes the creative process had the Blaschkas growing specimens in their garden so they could examine the plant up close.

“They informed themselves completely,” Pfister said.

Early drawings, including a Canada lily from 1892, are part of the exhibit, as are many cross-sections and dissections of all parts of a plant.

Over time, some of the glass models have been retouched and repaired, but the flowers are largely the same as when first displayed.

The temperature and humidity of the room where they are kept are now controlled. And as science and technology progressed, the plants were reclassified according to DNA sequencing. The cashew branch resides next to a mango and some poison ivy because they’re family.

The Glass Flowers are still as relevant as they were decades ago, said Jenny Brown, manager of the collection.

“People visit the Glass Flowers once and they bring their friends and relatives back to see it the next time,” she said. “They are very much loved.”