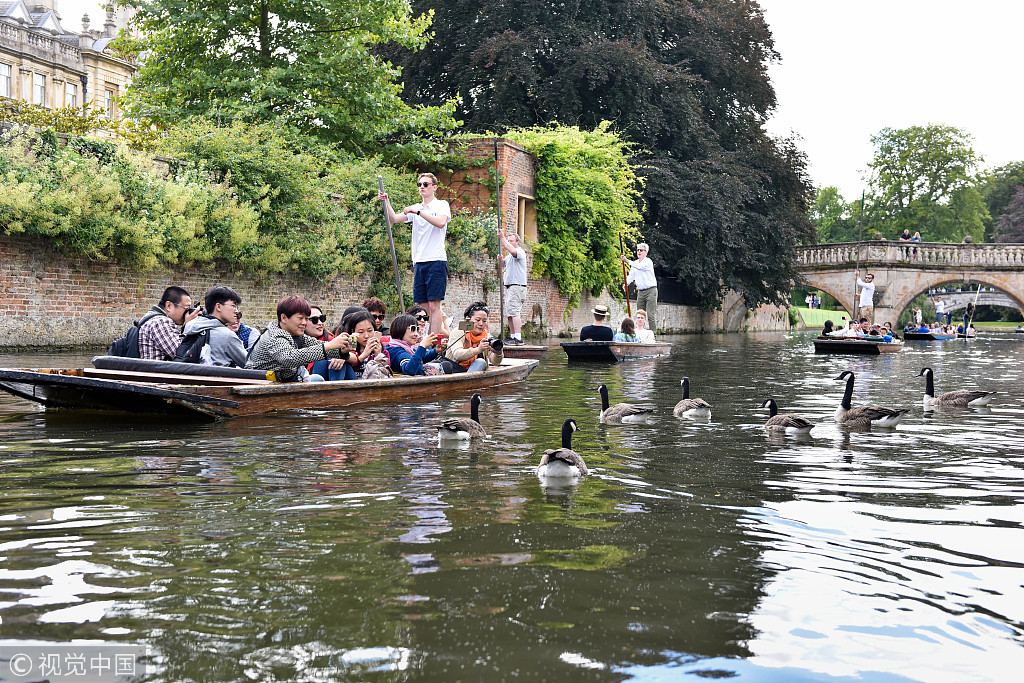 Chinese tourists enjoy a tour on the River Cam at the University of Cambridge, UK, during the summer of 2017. [Photo/VCG]

A record number of Chinese tourists visited Britain in 2017, showing a 29 percent increase on the previous year, VisitBritain said Friday.

The 337,000 visitors from China spent more than $900 million during their stay, a 35 percent rise compared to the total spending in 2016, said the official tourism agency.

Their report said Britain had seen a strong growth in overseas visitors 2017 from a mix of visitor markets including China, Australia, the Gulf region, India and the United States, underpinning a record year for inbound tourism.

VisitBritain said their new figures showed a double-digit growth in visits and spending last year from China, the world's most valuable outbound market.

Visits from the United States, Britain's most valuable market for tourism spending, grew 13 percent to 3.9 million in 2017, the highest since 2000. Visitors from the U.S. side spent a record $4.7 billion, up 9 percent.

Records were also set for the number of visits to London, up 4 percent on 2017 to 19.8 million, with tourism spending in Britain's capital up 14 percent to a record $17.6 billion.

Michael Ellis, parliamentary under secretary of state for arts, heritage and tourism, said: "Britain's tourism industry is booming. Last year was another record-breaker and we welcomed more people than ever from important markets including China, India and the Gulf states. We are working hard to sustain this excellent growth and encourage international visitors to travel around the UK, ensuring that more communities can benefit."

VisitBritain Director Patricia Yates said: "Tourism is one of Britain's most valuable export industries and the strong growth across many of our high-value markets demonstrates our continued ability to attract international visitors in a fiercely competitive global industry, and to deliver economic growth right across the country. This growth underscores the increasing importance of tourism as an industry that demonstrates Britain is an outward-facing nation, welcoming and engaging people from all over the world."

There were a record 25.6 million visits from the EU in 2017, with visitors spending more than $13 billion. Overall, 2017 was a record-breaker for overseas visits to Britain and for the amount visitors spent across the country, said Visit Britain.