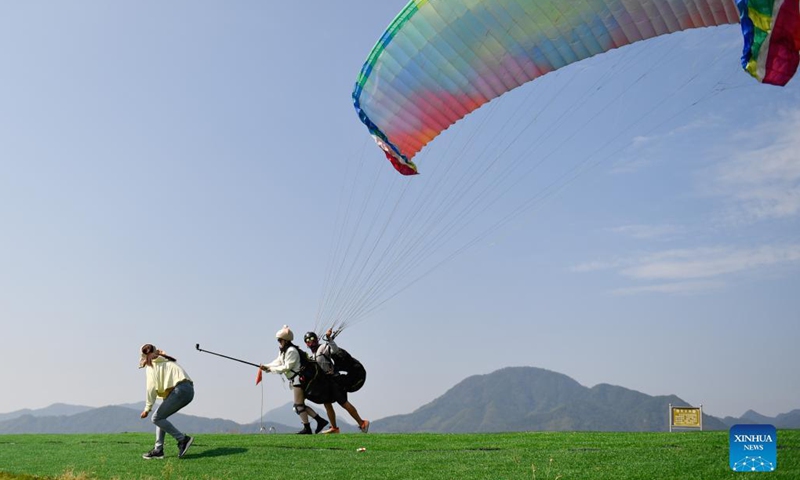 A number of popular scenic spots around China issued a limit or suspension of ticket sales due to reaching the daily maximum capacity for receiving visitors, amid the continued tourism heat during the National Day holidays, often dubbed as the Golden Week.

Taishan Mountain in East China's Shandong Province on Saturday issued a notice of the suspension for the sale of tickets for 13 hours as ticket reservation reached the maximum instantaneous capacity of 19,000 visitors.
Huashan Mountain in Northwest China's Shaanxi Province also announced on Saturday that its daily capacity was set at 30,000 visitors, and Jiuzhai Valley in Southwest China's Sichuan Province said it sold out 41,000 tickets on Saturday, with the number of tourists reaching its maximum capacity.
Red tourism is a hot trend during this year's National Day holidays, as 2021 marks the 100th anniversary of the founding of the Communist Party of China (CPC).
For instance, the Memorial for the First National Congress of the CPC in Shanghai, which opened in early June, has become a new landmark, attracting more than 10,000 visitors a day.
Other historical sites, including those in Northeast China's Jilin Province and Southwest China's Yunnan Province, related to the CPC are among the must-visit locations for tourists.
Apart from traditional sightseeing and cultural tours, special tours related to environmental protection have also become a new way of travel.
Research institutes jointly launched popular science activities in Hainan, in South China, during the National Day holidays, which allow visitors to experience the fun of deep-sea diving while learning about marine biodiversity and ecological environment protection through a series of popular science interaction activities.
Tourism spending was boosted by such special tours in Hainan. According to statistics, the Haikou Customs in Hainan supervised a total of 171 million yuan ($26.5 million) of duty-free shopping on the island, up 122 percent year-on-year.
A total of 10.5 million passengers are expected to travel by train and an additional 640 passenger trains will be added to meet the demand on Sunday, the third day of the 7-day National Day holidays, said China Railway, the country's railway operator, on Sunday.
China's railways handled 11.732 million passengers on Saturday, running an additional 917 trains.
But as the majority of the tourists have arrived at their destinations, the prices of flight tickets dropped significantly. For example, the cheapest direct flight from Shanghai to Shenzhen on Sunday is 140 yuan ($21.7), equivalent to no more than five cups of coffee.
Travel platforms have forecasted that a total of 650 million trips will be made during this holiday, with health and safety key priorities.
The Ministry of Culture and Tourism and the National Health Commission have reminded tourists to wear masks, wash hands and maintain social distancing where possible.
As of 3 pm on Sunday, the total box office of films, including presales, for the National Day holidays topped 2 billion yuan, according to Maoyan, a Chinese ticketing platform.
War epic film The Battle at Lake Changjin, about the Korean War (1950-53), has had an accumulative box office of 1.2 billion yuan in four days as of 11:15 am on Sunday. The single-day box office exceeded 426 million yuan on Saturday, setting a new single-day box office record for a war film in China's film history.

On Friday, a number of drones suddenly broke down while performing and fell directly into a crowd of onlookers from a high altitude in Zhengzhou, Central China's Henan Province, as showed in videos published by media.
The person responsible said on Saturday that drones crashed due to mechanical failure. No one was injured.