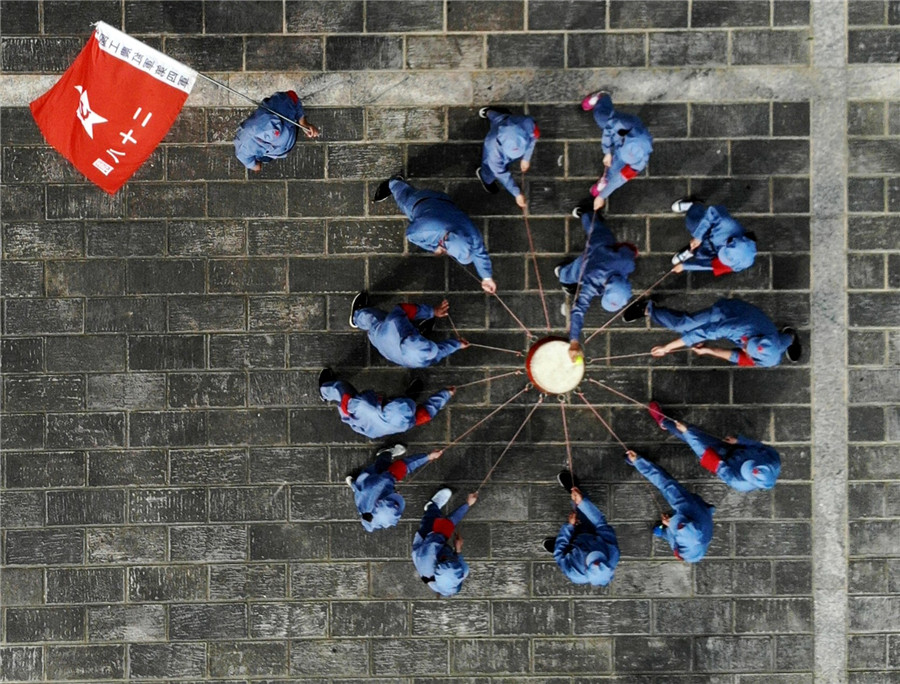 Millions of visitors are flocking to the birthplace of the revolution, creating business opportunities to lift villagers out of poverty. Zhang Yangfei reports from Ji'an, Jiangxi province.

A dozen "soldiers" tossed fake grenades into the target area, climbed over a wall made of tires and zigzagged nimbly to avoid touching white ropes meant to simulate a "rain of gunfire".

The scene might look like a military drill, but it was a dozen university students reliving a day of the Red Army. The event was part of a summer boot camp they attended to learn the history of the Chinese revolution in its birthplace, Jinggangshan, Jiangxi province.

The city offers a number of experiences to bring alive the difficulties the Red Army faced in the late 1920s.

The students are attracted by so-called "Red Education", and are among more than 10 million tourists who travel to Jinggangshan every year to experience its role in the revolution.

The massive number of visitors and limited amount of accommodations is helping lift the largely rural population out of poverty.

The hotels around the main attractions offer no more than 20,000 beds, which means homestays have huge potential to meet demand, according to Liu Jiguang, Party secretary of Dalong township.

"We have red stories backed by the 5A-level tourist spot (classification), we have green ecology. These are the best conditions to develop rural tourism, so we don't lack customers," he said.

In Bashang village, Xiao Fumin, 66, and his wife are among the beneficiaries of the tourism boom.

The couple, who run a homestay, expect the students in their house after the reenactment is completed. They will be fed a rustic meal stir-fried in a big wok on a wood-fire stove and served in the kitchen. "Students of all grades, from primary school to university, from all over the country come to my house every year," Xiao said. "In 2016, we received more than 800."

His daughter was diagnosed with the kidney disease uremia in 2013 and the high medical expenses dragged the family into debt. "She took the medicine for a couple of years but we couldn't afford better treatment so she passed away," he said.

In the entrance to Xiao's house, a plate issued by the local government hangs on the main door. It reads: "This family is in difficulty due to their daughter's disease. They have a monthly overdraft and annual extra medical costs of 20,000 yuan ($2,786). Personal wish: they want to buy a gas stove."

Before the tourism boom, the majority of people living in Jinggangshan were trapped by poverty, due mainly to the difficult terrain, isolation and poor farming conditions.

Like Xiao, many once made a humble living by planting rice, trading salt and raising livestock.

Located deep in the mountains without access to public transportation, many villages in Jinggangshan are isolated. Young adults depart to seek employment in cities and other provinces, leaving behind the elderly and young to farm crops which barely produce enough food to fill their stomachs.

According to the villagers, the cold mountain water is not good for the crops. The terrain also means there is little available farming land, while the weather make vegetation susceptible to pests.

Zhu Taosheng, who once lived in poverty in Dajing village, said they ate what they grew and bamboo was their only source of income.

"In the '90s, we couldn't even fill our stomachs. The rice yield was very low and many young men in the village couldn't find wives," he said.

Zhu, 59, hasn't been able to work for over 40 years after breaking his leg when he was 17. He married, though, and the burden of labor fell on his wife.

"Life was extremely difficult then," he said. "We quarreled so much over living. She was very mad and regretted marrying me and suffering. She even tried drinking poison."

Despite the hardship, Jinggangshan had one big advantage to lift it out of poverty－abundant historical sites marking the Chinese rural revolution.

Known as "the cradle of the Chinese revolution", Jinggangshan was the first revolutionary base of the communist Party of China and the headquarters of its army led by Mao Zedong.

After the aborted Autumn Harvest Uprising in 1927, one of the early armed insurrections by the Communists against the Kuomintang and the landlords of Hunan province, Mao led his forces to Jinggangshan. There, he established a base with the help of local chieftains Yuan Wencai and Wang Zuo.

It was there that Mao developed a rural-based strategy. He put forward the idea of an "armed independent regime of the workers and peasants" by "encircling the cities from the rural areas and seizing political power with armed force", paving the way for the Red Army's Long March in 1934 and leading to the revolution's final victory.

Today, Jinggangshan boasts a revolution museum and martyrs' memorials. Many villagers are descendants of Red Army martyrs and grew up hearing the stories of their ancestors.

Bashang village, for example, is where Mao stayed while his health recovered.

Dacang village is where he first met Yuan and convinced him, with a gift of more than 100 rifles, to join his cause.

The grandfather of Li Guofeng, the Party secretary of Bashang village, was one of the Red Army martyrs known for sending a white horse to Mao as a gift.

To take advantage of these and other stories and present a picture of how the Red Army fought under harsh conditions, the city has designed "Red Education" courses, to let tourists better understand the history of the city and experience the revolutionary spirit.

Twenty-year-old Li Zhaoning from Anqing Normal University in Anhui province is one of the boot camp members to experience a day as a Red Army soldier. The camp usually lasts seven days.

Shortly after midday on Aug 24, Li and his "comrades" flocked into Xiao Fumin's courtyard. They were all in Red Army uniforms, with red neckerchiefs and caps emblazoned with crimson stars.

Everyone was sweating after a morning of simulated attacks on a training field on a nearby mountain. The university students, all in their 20s, needed to serve themselves from a wok wider than their bodies.

"They tasted fine because we had good seasoning. But the Red Army ate them without other ingredients or condiments. It was the only food they had at that time."

During their stay, the students also tried weaving straw into shoes and trekked a section of the Long March in the mountains, carrying replica rifles and packs of explosives and poles weighed down with necessities.

"We wear sneakers," Li said."Just imagine the Red Army went on the march in straw shoes. It was really hard making the shoes, and they were also very prickly."

During the camp, many martyrs' descendants gave lectures and told of their ancestors' sacrifices.

Li said before he came to Jinggangshan, he had only read books about how important it was to participate in the Chinese revolution.

"Many stories in books are quite abstract and almost seem unreal to me," he said.

"But when I actually heard the martyrs' descendants telling those stories in front of me like an old father, tasted the rough food and had the training, I just felt deeply touched by their perseverance and faith."

Since 2011, a large number of villagers with the encouragement of the local government, have opened their doors to tourists and offered bed and breakfast.

Villagers like Xiao and Zhu have shaken off the past and now earn a comfortable living from their homes.

Peng Xiaying from Shenshan village, who opened her homestay in 2016 with her husband, said they can now earn about 110,000 yuan a year. Before that, the couple's income was around 9,000 yuan a year. Peng said the guests loved purchasing their dried bamboo shoots and sweet potatoes, tea, as well as handcrafted bamboo baskets and chopsticks, which all generate more income for the family.

"It really turned our lives upside down," she said while greeting a group of tourists from Sichuan province who'd stayed before.

The success of the homestays has seen companies from other provinces start investing in the village.

In Dacang village, a vast carpet of lotus flowers spreads to the foot of the mountain and the residents' old houses have been redesigned and refurbished with modern ensuite rooms.

These homestays are run professionally by a Shanghai company. Villagers rent their houses to the company and also hold shares. To maintain the accommodation status of a homestay, the company also offers jobs to locals.

The booming tourism industry has also enticed many villagers who earlier sought their fortunes elsewhere to return home.

When the first cafe in the village opened in May, Lin Xiaoyuan, who left home in 2007 looking for work opportunities in Chongqing, Zhejiang, Sichuan and Guangdong provinces, decided to return to the village and work as a waitress at the cafe. The other waitresses have similar stories.

"The salary is actually not more than before, but it feels good to be home," said Lin, who is married with two children.

Jinggangshan was officially removed from the poverty list in February 2017, becoming one of the first in the country to be re-categorized after President Xi Jinping set the goal of eradicating poverty by next year.

Last year, Xiao Fumin used some of his savings from his homestay business to cultivate 3 mu (0.067 hectares) of kiwi fruit, and said he expects a good harvest this year.

When asked about his dream of buying a gas stove, he laughed and said: "A gas stove? I can buy as many as I want today."