Refurbished ‘Big Boy’ locomotive fires up crowds in US West 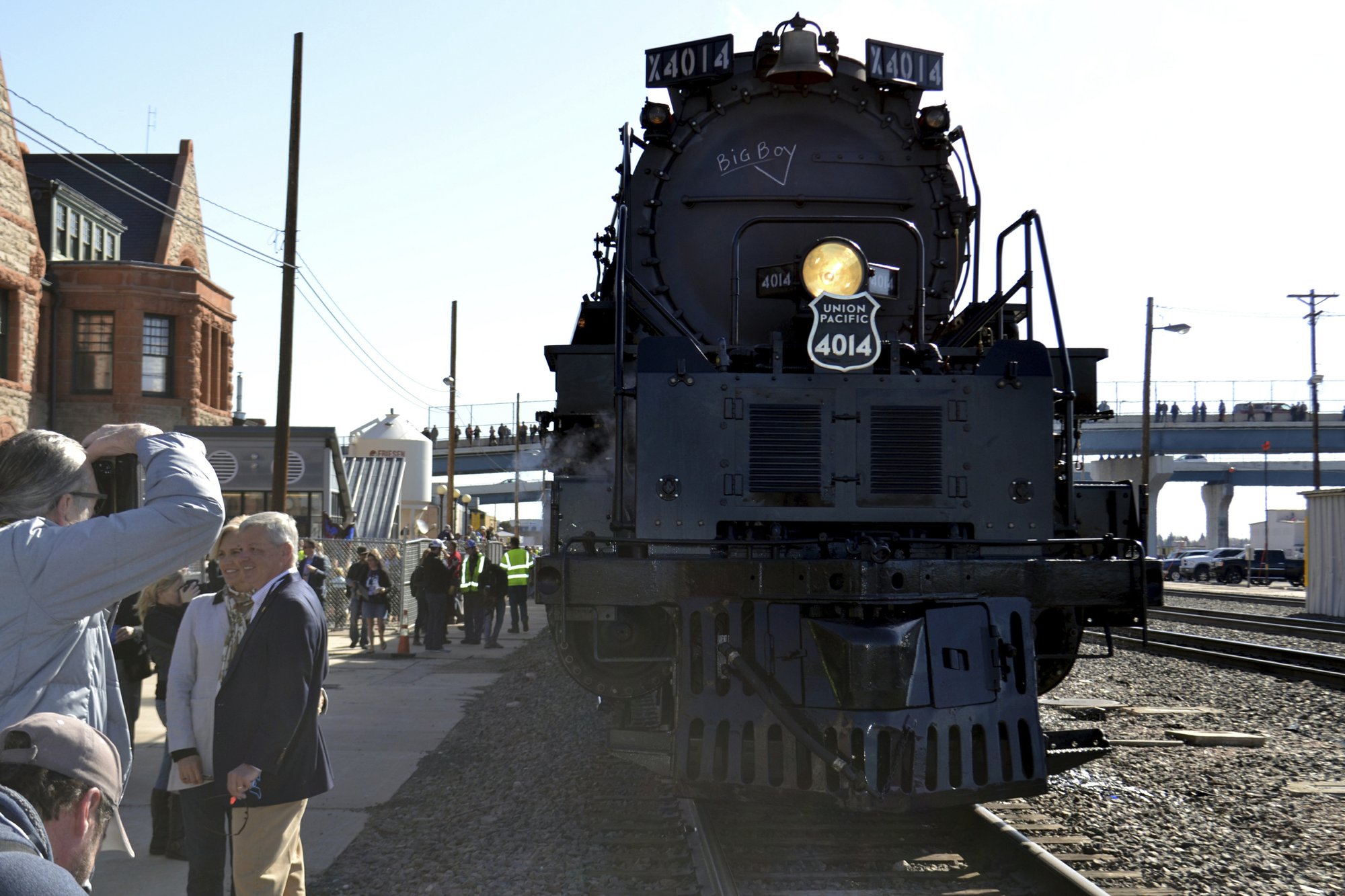 It’s longer than two city buses, weighs more than a Boeing 747 fully loaded with passengers and can pull 16 Statues of Liberty over a mountain.

The Big Boy No. 4014 steam locomotive rolled out of a Union Pacific restoration shop in Cheyenne over the weekend for a big debut after five years of restoration. It then headed toward Utah as part of a yearlong tour to commemorate the Transcontinental Railroad’s 150th anniversary.

Engineered for steep mountain grades, each Big Boy had not one but two huge engines beneath a 250-ton (227-tonne) boiler able to hold enough water to cover an area the size of a basketball court to the depth of a high-top shoe.

The locomotives are not only big, they’re so complex that steam train buffs long considered restoring one to a fully operational state all but impossible, said Jim Wrinn, editor of Trains magazine.

They were the “pinnacle of steam locomotive design” in the years before diesel engines took over as the less expensive, more efficient standard for US railroads, Wrinn said.

“It’s a pretty big deal,” said Wrinn. “Nobody ever thought that a Big Boy would be restored to operation. Ever.”

Union Pacific hasn’t said how much the restoration cost, but Wrinn estimated at least $4 million based on similar restorations. The result will be one of just six to eight steam engines still operational on mainline US railroad tracks.

The last steam locomotive delivered to Union Pacific, the “Living Legend” Northern No. 844, has remained in service since 1944. Big Boy No. 4014 will join in No. 844′s publicity work as a railroad version of the Goodyear Blimp, Wrinn said.

The locomotives will tour the Union Pacific system throughout 2019 in honor of the Transcontinental Railroad’s 1869 completion. They will be in Ogden, Utah, this week for an event featuring UP and Utah officials and a descendant of one of the Chinese workers who helped build the railroad.

Few train engineers these days know what it’s like to drive a steam locomotive, though retired Union Pacific engineer Mickey Cox once got a brief turn driving No. 844.

The cab had no air conditioning behind the big coal-fired boiler and got dirty, Cox recalled of his jaunt that included driving through a tunnel between Cheyenne and Laramie.

“Everybody in the cab is, you know, covered with soot by the time you go through the tunnel on those things. And it gets very hot. By the time you get out to the end of the tunnel, you’re welcome to see daylight,” said Cox, whose father and grandfather worked in the rail industry in Wyoming. “It would’ve been a tough job back in the day, I’m sure.”

Converted to burn fuel oil instead of coal, Big Boy No. 4014 will be less filthy, but even fewer people alive today know the experience of driving it. Big Boy No. 4014 was retired in late 1961, and no Big Boy engine has run since 1962.

One retired Union Pacific employee, Jim Ehernberger, remembers the Big Boys well. He joined the railroad at age 16 in 1953.

“You could sure tell when a Big Boy left town. The ground kind of vibrated a little more than it did with the other types of locomotives. They were very, very powerful,” Ehernberger said.

Union Pacific towed Big Boy No. 4014 to Cheyenne in 2014 after acquiring it from a museum in Pomona, California.

“They had to basically completely disassemble the locomotive down to just the frame and the shell,” Wrinn said. “It was an immense undertaking.”