TRAVEL Reliving the pages of a 19th-century literary classic

Reliving the pages of a 19th-century literary classic

The 100-hectare Grand View Garden in suburban Shanghai’s Qingpu District is a novel come to life. It recreates scenes from “A Dream of Red Mansions” (Hong Lou Meng), one of the four great works of Chinese literature.

The scenery by the lotus pool in the Grand View Garden replicates the backdrop of many memorable scenes in "A Dream of Red Mansions." (Photos: Shine.cn)

You do not have to read the mid-19th century novel or see film and TV adaptations to appreciate the setting of the Qing Dynasty (1644-1911), where author Cao Xueqing set his story.

The arch by the pool fronting the Grand View Pavilion, where main character Jia Yuanchun took a boat to visit her family.

The atmosphere and design of the garden transport visitors back to a time and place of a wealthy, aristocratic family in Beijing.

The venue is a full-size replicated landscape of the garden built by one of the novel’s main characters, Jia Baoyu, to celebrate the homecoming of an elder sister who is an imperial concubine and favorite of the emperor.

Slow, instrumental music plays wafts in parts of the garden, starting at the entrance. Visitors are greeted by large rockeries that form a passage ending at a pond of jade-colored water. Beyond that is a palace with three halls, where changed from her imperial dress and stopped to rest. And behind the palace, a lotus pool. A marble boat rests by the pool. In the novel, it transported concubine Jia Yuanchun across a water to visit her family in the Grand View Pavilion — a main feature of the park. 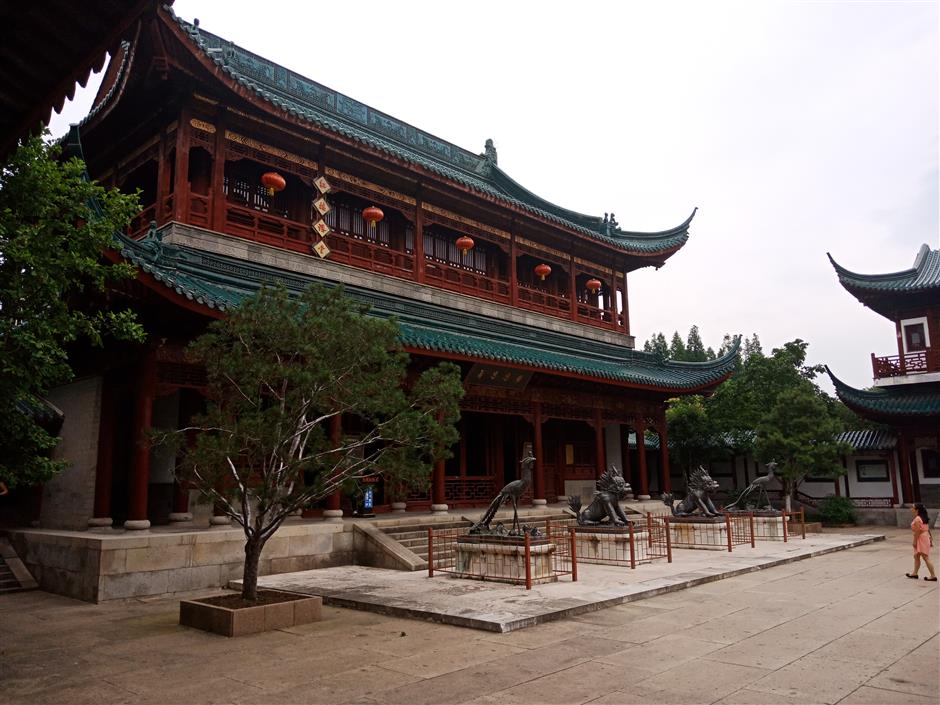 The imperial hall of the Grand View Pavilion

The 18-square-meter pool recreates the scenery of surrounding structures that Jia Yuanchun would admire along her journey.

The imperial hall of the Grand View Pavilion is guarded by statues of phoenixes and dragons that symbolize the high status of the family before it fell out of favor with the emperor and its fortunes faded.

The side lanes in the pavilion feature an introduction to characters who performed in a 1987 TV production of “A Dream of Red Mansions.”

Calligraphy and traditional musical instruments like the guqin were common decor in wealthy homes of the Qing Dynasty.

Here one can appreciate the complexities of the famous family saga, which features more than 40 main characters and hundreds of lesser roles in an entanglement of relationships and societal strictures.

One of the major features of the garden is Happy Red Court, where Jia Baoyu lived. It is filled with luxury furnishings of the period, including a mahogany bed intricately decorated with patterns of flowers. The walls are decorated with Jia’s poem and paintings. Bamboo and other plants create a peaceful, quiet atmosphere.

A large wooden mirror decorated with traditional carvings stands in the hall of the resting chamber of Jia, who was a scholar of the privileged class.

Other features of the garden include Bamboo Lodge, where Jia’s cousin and true love Lin Daiyu lived. To the west is Alpina Park, where Jia Baoyu’s wife Xue Baochai lived.

Lin dies of lovesickness in the novel because Jia is fated to marry Xue instead of her. A mannequin representing her recreates the scene before her death. The mood of the room is eerie.

Throughout the garden are structures representing the Qing Dynasty culture as it was portrayed in the literary work.

A Buddhist temple altar sits in the Green Lattice Nunnery, where younger cousin Jia Xichun took vows as a nun after the downfall of the clan. It was a shelter where characters attempted to shield themselves from the politics swirling around them.

The Grand View Pavilion has a performing stage. Opera performances commonly appeared in scenes of the novel, including for the celebration of cousin Xue Baochai’s 15th birthday. The family entourage included 12 performers known as the “12 Beauties of Jinling,” with whom Jia Baoyu shared special bonds in his compassionate affinity for women in the story. Musical instruments and calligraphy tools were common furnishings.

“A Dream of Red Mansions” hasn’t lost its resonance over the centuries since it was written.

Visiting the garden makes the classic story come to life with such realism that it’s easy to be lulled into thinking that it wasn’t really fiction at all.

How to get there: Take Metro line 2 or 10 to the Hongqiao Railway Station, then transfer to Line 17 to the Shanghai Oriental Land. Get out at Exit 3 to take the Qingshang bus line to the Jinshang Highway Grand View Garden stop. Or take the Hushang Express Line at Yan’an Road M. and Shimen No. 1 Road, which will take you directly to the garden.