The repair project of Taimiao in the Shenyang Palace Museum, Northeast China's Liaoning Province, was completed on Saturday, and the museum is now fully open to the public. 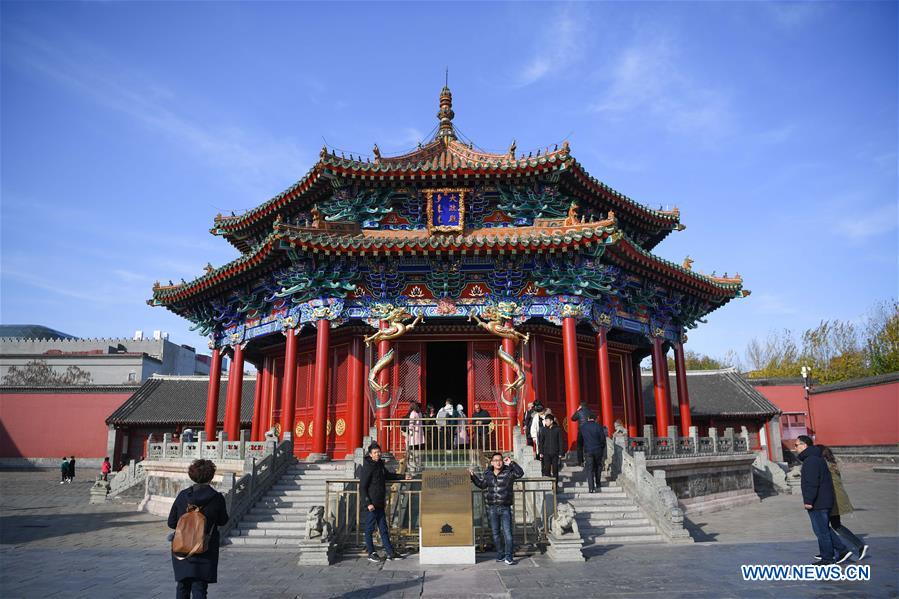 Tourists visit the newly-renovated Dazheng Hall of the Shenyang Palace Museum in Shenyang, capital of northeast China's Liaoning Province, Nov. 5, 2018. The nearly 400-year-old palace is second in grandeur only to the Forbidden City, or the Palace Museum, in Beijing.(Photo: Xinhua)

Taimiao, also known as Shengjing Taimiao, was built in 1781 and is the first familial temple of the founding emperor of the Qing Dynasty (1644-1911) Huang Taiji.

Located in the east side of Daqingmen in the palace museum, the temple is an independent courtyard which was not the dwelling of emperors and their households, but a place of worship for emperors to commemorate their ancestors.

In 1778, the Qianlong Emperor, the sixth emperor of the Qing Dynasty, gave orders to reconstruct Taimiao.

Once the construction was finished, every emperor who visited Shengjing, the initial capital in the Qing Dynasty and present day Shenyang, had to give a salute at the temple before entering the palace. As a result, though the area of the temple is not large, its position is higher than any building within the Shenyang Palace Museum.

As one of the major projects approved by the National Cultural Heritage Administration, the Taimiao repair project invited the public to witness and experience the repair work.

Many visitors have witnessed and experienced the work of tiling, painting and paving floors.

Li Sheng, head of the Shenyang Palace Museum, told the Xinhua News Agency on Saturday that showing the original craft and practice of repairing the Taimiao architectural complex can not only increase people's knowledge of ancient architecture and their sense of national pride, but also the quality of the conservation project.

An exhibition on Taimiao's history also opened on Saturday. From October 2 to 5, the number of tourists to the palace museum reached its daily maximum of 32,000, according to Liaoning Evening Post.