TRAVEL Riding a wave of success

Riding a wave of success 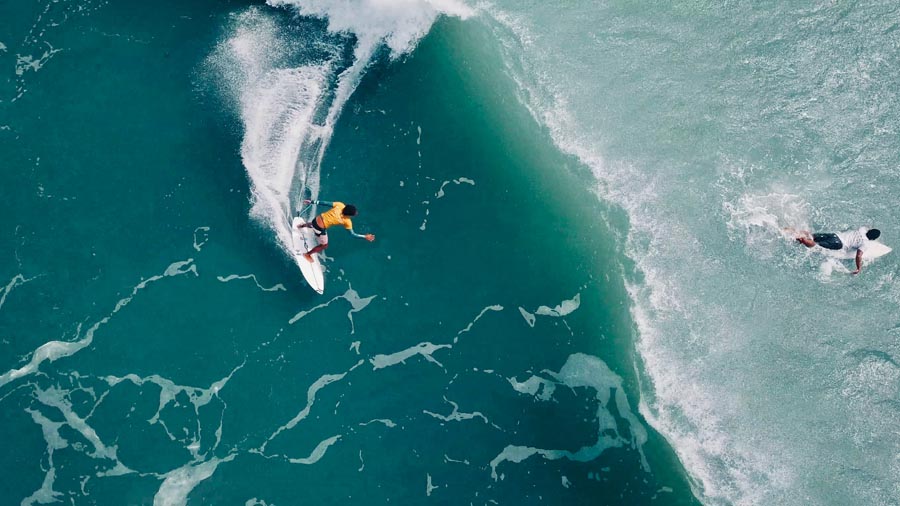 Flanked by swaying coconut trees, the secluded beach at Riyue Bay in Hainan province is an idyllic and usually tranquil setting. But all that changed when the beach in Wanning city hosted the Hainan Surfing Open in early December amid, quite literally, waves of excitement.

Spectators gathered, watched and cheered as surfers paddled out to the sea, waited for the right moment, harnessed their adrenaline and rode a fast-moving and unpredictable wall of water.

Rows of stalls selling surfing gear, snacks, and handmade crafts sat alongside tattoo booths, adding to the atmosphere as visitors got to sample a little beach life.

Now in its 11th year, the event epitomizes surf culture in China.

It all started with someone's dream. His name was Brendan Sheridan, a California-born surf enthusiast who was attracted by the unspoiled coves and powerful waves of the island province of Hainan. He actually moved to the tropical island in 2006 and launched the surfing contest two years later.

Back then, just two surfers out of the 40 participants were Chinese. However, this year, supported by eight surf clubs from across the country and various corporate sponsors, 81 contestants, mostly Chinese, took part.

"So much has changed since the first competition," says Sheridan. "I'm proud to have this competition as a way of measuring how much surfing in China has progressed."

Since the creator of the event planned to return to his home country, he passed on the baton, or more appropriately the surfboard, to the future organizer, Li Jing, in 2015.

A flair for organizing

Li, 32, a Shenzhen-based office worker, initially tried the sport during a one-week trip to Riyue Bay in 2013. She was bitten by the bug and attracted by the simple, freewheeling lifestyle led by surfers.

She quit her job and started doing marketing and communications for the Jalenboo Surf Club.

"I helped Sheridan with the Surfing Open for two years and discovered that I was good at organizing and running promotional activities," recalls Li. "I have been organizing the annual event ever since his departure."

Li knows that as the oldest surfing competition in China, the event should be a fine example for other nongovernmental competition organizers to learn from.

She has traveled to Indonesia and several other countries to learn more about how to run events.

"We continuously try to meet the needs of the embryonic and developing surfing industry," she says.

In 2015, a contest for novices was added to the event, engaging a larger group of surf lovers.

The next year, national and provincial surf teams were set up after the sport was included in the 2020 Summer Olympics in Tokyo. Subsequently, various surf competitions sprang up in other coastal cities. And every sport needs officials, judges, and referees to make the difficult decisions.

Li and her colleagues decided to initiate training sessions for referees and offer internship opportunities for referee candidates at the open in 2016.

"It is worth mentioning that all the referees and photographers are volunteers," says Li.

Various beachside activities, such as exhibitions and concerts, were also held to keep spectators entertained.

Yang Ruijia, 30, a former member of China's national surfing team, volunteered to work as a judge.

She says she noticed that the event is growing into a more diversified festival of surf where visitors can enjoy music, food and the arts.

Yang, a former professional surfer, points out that the event maintains a relaxed atmosphere because most of its participants are amateurs.

"Every year, they come to compete for fun and meet up with old friends," says Yang.

Xu Jingsen, another participant at the event, agrees and adds that these informal surf contests offer an open platform for amateur surfers to strut their skills and get to know people who share the same passion.

Xu, a graduate from the Ocean University of China in Shandong province's Qingdao city, became obsessed with the water sport in 2011.

He practiced the skills needed to conquer the waves at surfing spots in the coastal city. Mastering how to spot a wave and paddle to the right spot quickly, honing the best body stance and learning how to guide the board with the minimum of energy took hard work and dedication.

It was also a good way to escape the everyday concerns of life and rejuvenate his mind and body, says the 30-year-old.

"I hope I can contribute to enlarging the surf community and spread surfer culture in Qingdao," he says, adding that he plans to launch his own surfboard brand.

Flora Christin, 28, a top Indonesian female longboard surfer, made her debut at the Riyue Bay event this year.

She lives in the right spot－Canggu, on the island of Bali－a perfect setting for surfers. Compared to Riyue Bay, she says, Canggu has a long-established surfing culture, attracting people from all over the world.

"Hainan could be very big if you promote it worldwide through social media, hold more surf events and festivals, and invite surfers from outside of China," she says.

It's also important, she adds, for Chinese surfers to compete in international events.