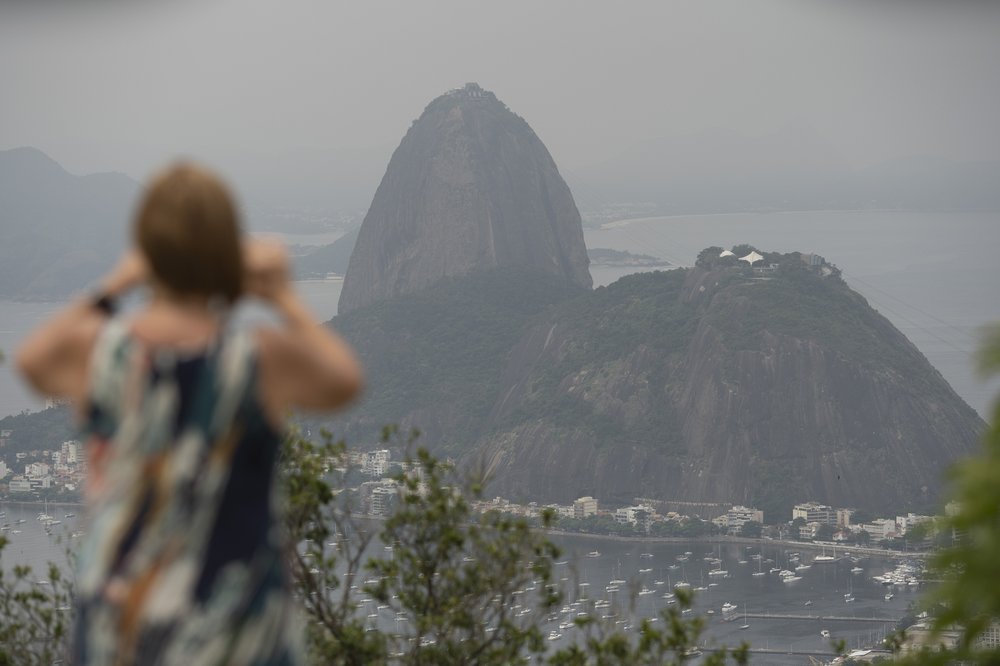 Rio de Janeiro’s Christ the Redeemer statue, which appears to balance improbably atop Corcovado mountain, has withstood the worst of what the elements could muster for nearly nine decades. Now it, too, is succumbing to the outbreak of the new coronavirus.

The 125-foot-tall statue, which last year saw almost 2 million visitors, closed at day-end Tuesday and won’t reopen for at least a week. To contain the virus’ spread, Brazil’s Chico Mendes Institute on Tuesday ordered the closure of all national parks it oversees, including the one that’s home to the Christ.

At the foot of the statue throughout the overcast afternoon, the last selfie-snapping tourists were still allowed to gather on the lookout that offers a panoramic view out over the so-called Marvelous City.

Rio seems less marvelous by the day with the creep of the new virus. Firemen began blaring recordings that urge beachgoers to stay home on Monday, one day before Rio’s Gov. Wilson Witzel decreed a state of emergency. They did the same Tuesday, though it was hardly a beach day.

Among other things, Witzel’s decree recommended that restaurants and bars limit themselves to 30% capacity for 15 days, that boats and buses halve their passenger loads, that shopping malls close and people avoid beaches and public pools. The decree also suspended classes and all other activities and events that entail gatherings.

“We are afraid, we feel unsafe,” Maurilivia Gomes, a 35-year-old baker visiting from Goias state, said inside the near-empty train riding up the mountain to the Christ. “We’re taking the necessary measures. And we’re also going to enjoy what we can and circulate in open spaces, because we can’t travel this far then stay confined in a room for four days.”

The company that administers transport and installations at Rio’s Sugarloaf Mountain, another postcard destination that sees 1.5 million visitors annually, already closed shop on Tuesday. Even before the governor’s decree, Bondinho Pão de Açúcar had halved the number of passengers on its cable cars, to 32, and begun wiping them down with alcohol after each journey, according to Sandro Fernandes, the company’s CEO.

Brazil has recorded almost 300 confirmed cases of Covid-19, with more than half in Sao Paulo and the second-largest number in Rio, according to the health ministry. The nation reported its first death from the virus the same day: a 62-year-old man in Sao Paulo.

As local leaders imposed and recommended precautions, Brazil’s President Jair Bolsonaro said the measures could damage the economy and once again expressed skepticism of the virus’ severity.

“What is incorrect is the hysteria, as though it were the end of the world. A nation like Brazil, for example, will only be free when a certain number of people are infected and create antibodies,” he told a local radio station, Radio Tupi.

For most people, Covid-19 entails only mild or moderate symptoms, such as fever and cough. For some, especially older adults and people with existing health problems, it can cause more severe illness, including pneumonia, and death. The vast majority of people recover.

Tour guides - along with many others - said they were concerned about the impact closing down Rio’s main tourist sites will have on their livelihoods.

“We have to count on the hope that we can find a family that wants to walk around and do something at least, so we can earn something this month,” Alexandre Faria Carbonelli said in the plaza beneath Sugarloaf’s cable car. “For guys who work autonomously, don’t have savings, have a family, it’s kind of desperate.”

At the Christ, Rio’s Catholic archdiocese is planning a light show for Wednesday night, projecting the flags of nations afflicted by Covid-19 upon the isolated statue.

Toward sundown on Tuesday, the final visitors trickled out before the statue closed down. One couple was visiting from Chile. Another had come from Moscow, and leaned up against one another in an embrace.

At some point the sun slid beneath the cloud-covered horizon and the grey drained from the sky. The Christ was illuminated but, from below, was a barely-visible smudge of light shrouded in clouds.