TRAVEL Rising numbers of travelers between China and Japan

Rising numbers of travelers between China and Japan 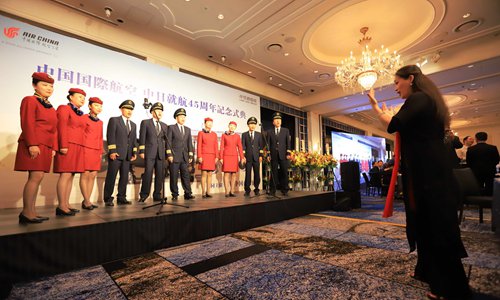 The Air China choir sing Chinese and Japanese songs at a ceremony for the 45th anniversary of the opening of its route from the Chinese mainland to Japan on August 22. (Photo: Global Times)

Bao Xiaohe, a frequent flyer between Beijing and Japan, has flown nine times in the past year. She has visited more than 30 cities in Japan, from Tokyo to Osaka to Okinawa. Each time she travels, Bao spends 10 days there.

"I loved Japanese culture when I was a kid, so I like to visit the country," she told the Global Times on Wednesday.

On August 22, China's flag carrier Air China celebrated the 45th anniversary of the opening of its route from the Chinese mainland to Japan in 1974.

Kong Xuanyou, China's Ambassador to Japan, said at the ceremony that Air China has played an important role in the Sino-Japanese friendship.

In a note sent to the Global Times, Air China said that the Boeing 707 passenger plane B-2418 made the first flight on the Beijing-Shanghai-Tokyo route, led by then-Vice Premier Wang Zhen.

On the same day, airlines from Japan used the DC-8 aircraft to fly the Tokyo-Shanghai-Beijing route. The two airplanes landed at their respective destinations, Beijing and Tokyo, at almost the same time.

With the development of bilateral relations, routes and flights between China and Japan continue to increase. Air China's Japanese regional headquarters has eight sales offices in cities such as Tokyo, Osaka and Nagoya, extending to eight Chinese cities with 20 routes between the two countries.

At present, there are 23 carriers that operate between the two Asian giants, with 2,420 direct flights per week. Airlines under the Air China group operate a total of 29 routes between China and Japan, with 540 weekly flights and nearly 4 million passengers per year. Its transportation capacity is highest among carriers on this route. According to the plan, the total number of weekly flights operated by Air China's carriers will exceed 620 from 2020, according to a note sent to the Global Times.

The Civil Aviation Administration of China said on its website that 48 international flight applications were received from January 8 to 14. Among these, three-fourths were for flights between China and Japan, including eight carriers from Air China, Xiamen Airlines, China Southern Airlines and Capital Airlines.

There are now 24 new routes flying from Chinese capital cities or second-tier cities to Osaka, Nagoya, Sapporo and Okinawa.

Although China Eastern Airlines did not apply for a new route, it signed a memorandum of understanding with Japan Airlines last August to pursue a joint business agreement, with the aim of improving customer convenience and enhancing the quality of services provided by both carriers. The agreement plans to include Japan Airlines' domestic network, featuring over 50 cities in Japan and over 80 of China's domestic routes operated by China Eastern Airlines.

China Eastern is a prominent carrier on the Sino-Japanese route. It has a total of 22 routes, connecting 26 destinations in both countries and operates 522 flights per week.

The rising number of routes is related to increasing travelers.

Kyodo News reported that 7.36 million passengers from the Chinese mainland traveled to Japan in 2017, an increase of 15.4 percent year-on-year. The scale of China's visits to Japan has grown from one million people 10 years ago to seven million.

The massive growth of the China-Japan route is inseparable from the coming 2020 Tokyo Olympics.

In order to achieve their goal of 40 million foreign tourists during the Olympic Games in Tokyo in 2020, Japanese policy makers will continue to relax visa regulations for Chinese tourists this year, and will invite low-cost airlines to provide services at major airports.

In order to attract more Chinese tourists to the 2020 Tokyo Olympics, the Japanese government and the mayor of Tokyo have taken measures to improve foreign tourists' experience. These include providing greater wireless-internet access and upgrading transportation networks.

Considering the social unrest in Hong Kong and the restricted travel policy in Taiwan, Japan is the best choice, said insiders.

A pilot program allowing the residents of 47 Chinese mainland cities to fly to Taiwan on individual trips has been suspended, starting August 1, due to "the current cross-Straits ties," leading to a sharp decline in the number of mainland travelers to the island.