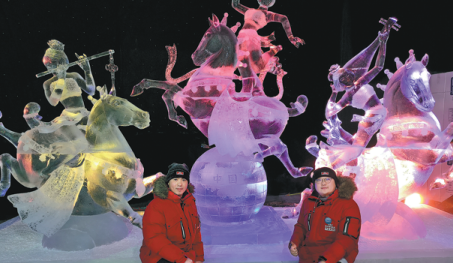 An Ode to the Flourishing Tang Dynasty by Ji Huailong (left) and Zhang Xin is displayed at an international ice and snow exchange activity held in Berlin in November. (Photo: China Daily)

Every winter, large cubes of ice from Songhua River become magnificent artworks at the hands of sculptors in Harbin, the capital city of Northeast China's Heilongjiang province.

There are snow and ice for more than a third of the year in Heilongjiang.

Residents and tourists can appreciate vivid animals, mysterious legends and fantastic avant-garde art in parks, streets and almost everywhere else in the city, which has a long history of ice engraving.

In recent years, more ice sculptors from Harbin have gone abroad to exhibit their exquisite craftsmanship and promote the unique charm of ice sculptures with Chinese elements.

It was the first time a Chinese city presented the ice and snow art abroad.

Some landmarks and cultural symbols of Harbin city, such as the Flood Control Monument, Harbin swans and the waves of the Songhua River were also displayed.

"The creative process had already attracted much attention and we all felt quite proud when we received praise and applause for our techniques from the local residents," said Zhu Xiaodong, deputy director of the center, also one of the sculptors.

"Every day we chose the coldest time to work and finally finished all the sculptures before the opening ceremony," he added.

"I feel so lucky that I have been to Harbin, which is a beautiful city and the most like Moscow in China," said Galina Kulikova, first deputy chairwoman of the Russia-China Friendship Association. She received the Friendship Medal, China's highest state honor in Oct 2019."And only in Harbin, people can see the world's top ice and snow sculptures," she added.

For Ji Huailong, a 41-year-old sculptor from Harbin, the visit to Berlin, Germany, in November 2019 became an unforgettable experience in his 22-year career.

Ji and Zhang Xin, a professor from the Department of Sculpture at Harbin Normal University were invited to an international symposium on ice and snow held in Berlin.

Twenty-seven artists from 10 countries participated in the event. It was the first time for the event to invite Chinese artists.

Ji and Zhang spent 16 days finishing their work; a 7-meter-long, 2-m-wide and 4-m-high ice sculpture called an Ode to the Flourishing Tang Dynasty.

They used more than 100 ice blocks to show the prosperity of the Tang Dynasty (618-907) that includes women holding musical instruments and galloping horses.

"On the exhibition, I met two Chinese visitors who have been in Germany for more than 10 years," said Ji. "They told me they felt quite excited and proud to find ice sculpture made by Chinese artists that showed the power of our motherland."