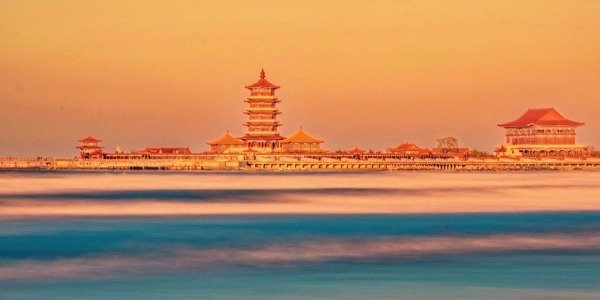 In 1861, Dengzhou was little more than a treaty port overshadowed by the opening of its southern neighbor, Yantai. Since retiring from commerce, though, this former entrepot has had more time to get in touch with its spiritual side—including a reversion to its poetic ancient nickname of Penglai, which it shares with a mythical abode of immortals described in the fourth-century BCE Classic of Mountains and Seas.

According to this ancient text, Penglai Mountain was an isle of eternal summer in the Bohai Sea, where wine glasses refilled themselves and magic fruits granted everlasting youth. Located at the boundary between Bohai and the Yellow Sea, Shandong’s Penglai is a good candidate for this arcane realm in more ways than one: It is famous for Fata Morgana, phantom mirages of cities floating above the sea. “Clouds wind bright and clear in the east. Many immortals are half-concealed within,” the 11th century poet Su Shi described it.

The “Red Cliffs” of Penglai, are believed to be the spot where the Eight Immortals of Daoist mythology set out for the lands of eternity. Legends say that China’s first emperor, Qin Shi Huang, sent ships carrying 3,000 boys and girls after these ascended deities, but the expedition never returned. Emperor Wu of the Han dynasty (206 BCE – 220 CE) also ventured here during his Eastern Tour, but, being of a more practical bent, abandoned the search for an elixir of immortality, and established a fortress at the spot.

During the Tang dynasty (618 – 907), a flourishing trade in silk and porcelain departed Penglai’s shores en route to Japan and the Korean kingdom of Silla, which sent tribute in return through the same port. In the 11th century, the Song emperor built a castle known as the Penglai Pavilion at the Red Cliffs, later expanded into a 100-hectare complex with moats during the Ming dynasty (1368 – 1644).

Today, Penglai still plays second fiddle to Yantai, who administers it as a county-level city, and the few blocks of new apartments and malls near the tourist attractions are encircled by fishing villages. These now mainly cater to Penglai’s growing reputation as a regional tourism hub, offering room and board to visitors who come from Beijing, Tianjin, and elsewhere in Shandong for beaches slightly cleaner than Yantai’s and seafood fresh off the boats.

The Penglai Pavilion, the city’s only 5A tourist attraction, is a must-see on any visitor’s itinerary; one can get a pretty comprehensive lesson in local history from the eponymous fortress, the on-site Dengzhou Museum, and Penglai Ancient Ship Museum. For those visiting with children, Penglai Ocean Aquarium is adjacent to the Pavilion and claims to be the biggest aquarium in Asia, while Europark offers standard amusement park attractions and European-style architecture.

A newer attraction, the Eight Immortals Crossing the Sea Scenic Area, pays tribute to the ancient legend and has an on-site cinema showing footage from two Fata Morgana spotted in 1988 and 2005. The massive Three Immortal Mountains Scenic Area nearby is a homage to China’s traditional religions and the eccentric tastes of its owner—a local property tycoon who amassed a unique collection of precious objects ranging from an 11-faced statue of the Guanyin bodhisattva to priceless “tree jade,” petrified snakes, and state gifts received by Chinese leaders.