TRAVEL Shanghai Disneyland may reopen during May Day holiday: experts

Shanghai Disneyland may reopen during May Day holiday: experts 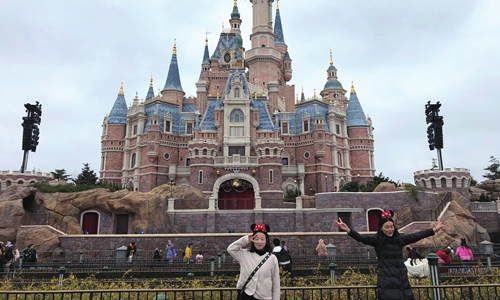 As Chinese Disney fans yearn for the reopening of the fairytale theme park, an analyst said there is a possibility that Shanghai Disneyland will reopen during the upcoming five-day May Day holiday, making it the first to restart operations among the six Disneyland theme parks worldwide.

It is possible for Shanghai Disneyland to resume limited operations during the May Day holiday, because many local students are prepared to return to school as the COVID-19 epidemic is now brought under control, Ji Zhiying, travel industry analyst at Beijing-based consulting and research firm Analysys, told the Global Times on Thursday.

"However, due to China's regulations on virus control, all the resorts in China are only allowed to reopen outdoor areas, and they must keep the number of visitors below 30 percent of total capacity," Ji noted.

Shanghai Disneyland is negotiating with the local government and Walt Disney on the resort's reopening date, depending on when students in the Chinese mainland return to school, media reports said.

An employee at the hotel told the Global Times that it is providing dining and hotel services but only half of the rooms are allowed to accommodate guests. Customers must take their body temperatures and show qualified digital health codes before checking in.

"We have not received any notification to restart Disneyland during the coming holiday," a receptionist at Shanghai Disneyland said, noting "the theme park is waiting for official approval."

Shanghai Disneyland halted operations on January 25 and Hong Kong Disneyland shut down on the following day. Neither had replied to the Global Times inquiries as of the press time.

The possible reopening of Shanghai Disney Resort will to some extent get the world's biggest entertainment company out of financial crunch.

As a result, the company will reportedly stop paying more than 100,000 employees this week - nearly half of its workforce, saving Disney up to $500 million a month in its theme parks and hotels, the Financial Times said.

"It will be a life-and-death crisis for Walt Disney this year if the pandemic cannot be contained within 2020… film shooting is being delayed while theaters can't release finished films," Liu Dingding, a Beijing-based industry analyst, told the Global Times, noting that Disney's revenue will plummet if content production is disrupted greatly.