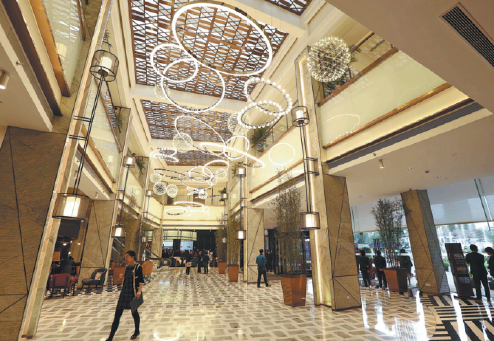 Some 6.5 million sets of disposable toiletry kits are estimated to be used each day that half of the hotel rooms across China are booked.(Photo provided to China Daily)

Bid to cut use of toiletry kits, part of citywide move to recycle garbage

Hotels in Shanghai are being asked to stop offering disposable toiletry kits unless customers ask, amid efforts to reduce waste.

Hotel guests are encouraged to use and reuse recyclable daily consumables of their own, such as toothbrushes, combs, bath sponges, razors, nail files and shoe polish.

The move is outlined in the city's new regulations on garbage sorting and recycling that went into effect on Monday.

Under the new regulations, most household plastic waste should be sorted and recycled. The city also encourages individuals and companies to reduce their use of disposable plastic products.

"Shanghai is taking a lead in the country with a measure like this," said Gerd Knaust, general manager of The Kunlun Jing An. "Hotels, as a window of the city, should make contributions to sorting and recycling garbage and encouraging more customers from all over the world to lead an eco-friendly life."

The hotel has informed its potential customers of the change via online and offline channels.

"It is a good thing to reduce waste in daily life," said Zhang Wei, 40, from East China's Shandong province, who checked in to the hotel for a business trip. He brought a reusable toothbrush after being informed by the hotel of its new policy.

At least 6.5 million sets of disposable toiletry kits are estimated to be used everyday if the occupancy rate is 50 percent for the 13-15 million hotel rooms across China, said Du Liangliang of the Hotel Business Unit of Ctrip, China's leading online travel agency.

"It will be of great significance for reducing the amount of waste if hotels across the country follow suit not to offer disposable toiletry kits," Du said.