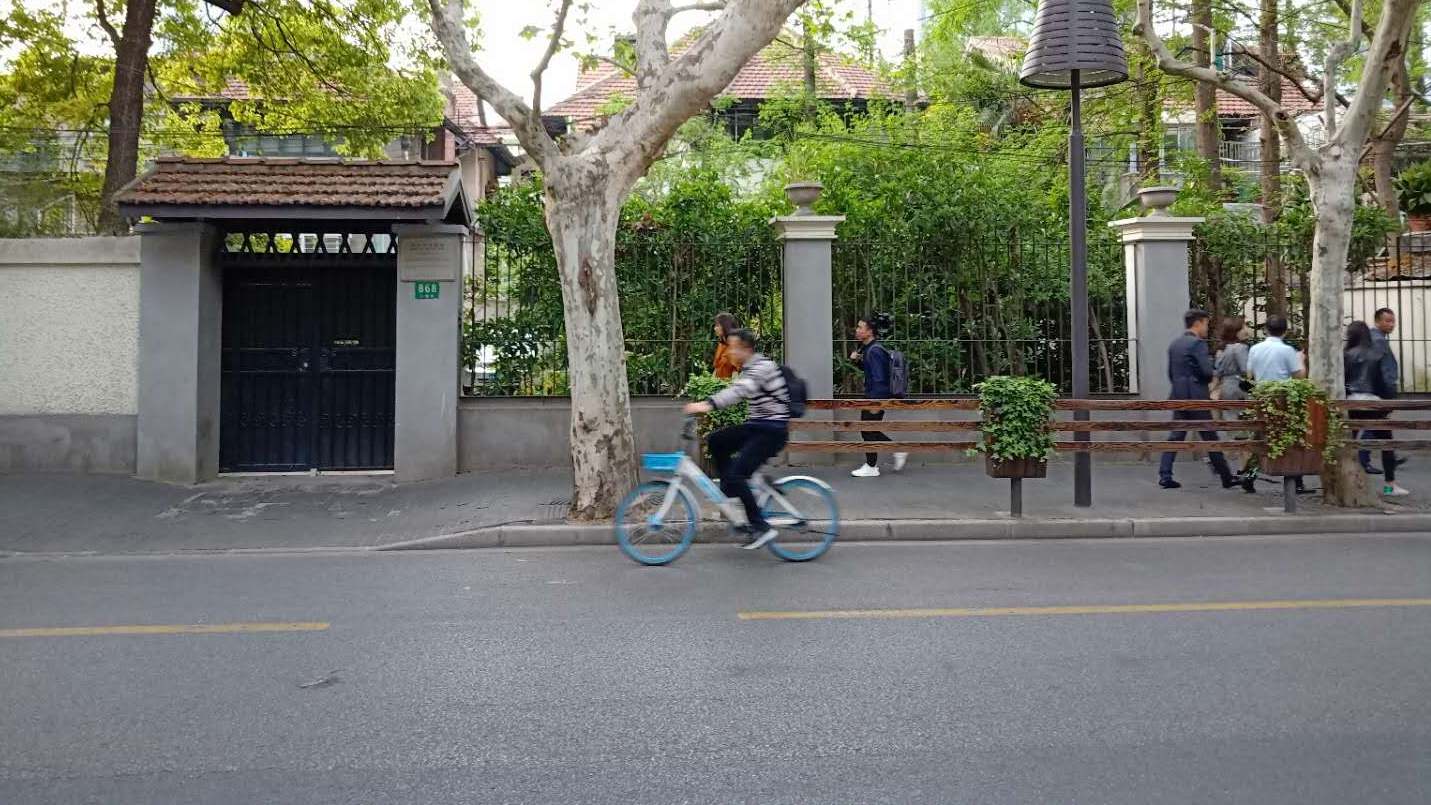 Some cyclists wear simple face masks, while one clever local looked like she was prepared to weld metal as she zipped down the tree-lined streets of the former French Concession. Pollen wafted heavy in the wind, but it takes more than a little allergen to stop Shanghai's cyclists from biking around town, especially on a clear spring afternoon.

My eyes itched, but I pedaled my blue and white Hellobike through Shanghai, an eastern metropolis of China, the former "bicycle kingdom." Just keep to the right, I said to myself as cars and a surprising number of e-bikes zipped past me. I started to realize why my tour guide earlier that day had said that Shanghai should be rebranded the "e-bike kingdom." As China implemented new regulations this April to respond to a growing number of e-bikes, this phenomenon is slowly changing cycling culture.

Traditional cycling in China was a popular form of transportation through the 1980s and mid-1990s, falling out of favor as rising wealth allowed consumers to buy cars. Biking, however, returned with fervor in recent years as environmentally conscious start-ups capitalized on the well-documented bike sharing programs and, more recently, e-bikes.

As China's cities develop, cycling culture will adapt with them, and Shanghai is among the cities at the forefront. It's no surprise that the China International Bike Fair takes place in Shanghai, celebrating its 28th edition this May. Shanghai is a model example and the city with the largest bike share in 2016. It banned e-bike shares in 2017, but private ownership is on the rise.

Today, an estimated 200 million e-bikes roll through the country, though reliable data for each city remains unavailable. Fortunately, that may change as new regulations this April require e-bike owners to register their vehicles. The new laws also limit e-bike speed to 25 kilometers per hour and limit their weight to 55 kilograms.

Cycling for tourists, e-bikes for locals

For travelers, pedaling through Shanghai the old-fashioned way can still be a rewarding experience. Li Chen at China Cycle Tours agrees that Shanghai is bike-friendly. I joined one of her tours in April to acclimate myself to cycling through Shanghai. A bike commuter when living in Paris and London, I have yet to pedal through my current home, Beijing, preferring to avoid a smog-filled commute dodging law-breaking and speeding electric scooters.

With a guide in Shanghai, however, I quickly learned the rules of the road and participated in the intricate dance of cyclists, e-bikes, and automobiles that whiz through the city of some 26 million people. There are now numerous companies as well as several Airbnb Experiences dedicated to visiting Shanghai on two wheels.

Traditional cycling, however, might become a touristy adventure more than a local means of commuting. "Normally local people do not use bikes for transportation," Li said, suggesting the term "E-bike kingdom" for her city, instead.

Dockless shared pushbikes are still everywhere, but their future remains uncertain. A surplus of cheaply-made public bikes has been reported since 2017, and some like the yellow ofo bikes have already all but disappeared. This year, Hellobike raised prices in Beijing from 1 yuan, about 15 U.S. cents, per half-hour to just fifteen minutes, causing a stir among users. The cheapest subway ride in Beijing only costs 3 yuan. Alongside popular share systems like Mobike, brands like Hellobike are reportedly seeking 500 million U.S. dollars in financing their popular blue bikes. Whether or not the companies can sustain growth remains questionable.

As cheaper e-bikes, like Xiaomi's new model, enter the market for around 400 U.S. dollars, the Chinese may increasingly turn towards these green alternatives to automobiles.

As more e-bikes hit the streets, they weave through the often crowded bike lanes, and authorities are beginning to address safety concerns.

Jack, another cycle guide, also described how e-bikes had overtaken Shanghai in recent years. "E-bikes are faster, and when they cross you without saying anything, it's dangerous," he said, though he still believes the city deserves the country's moniker "bicycle kingdom".

Any visitor crossing a busy Chinese intersection can attest to the chaotic nature of Chinese roads, but the recent regulations seek to control the new population of riders, which are especially popular options among the ever-growing food delivery services in China. Shanghai has even begun using facial recognition this year to catch bikers who run red lights.

Li said she notices how delivery men on electrc-scooters often break the traffic rules, but new chip technology is keeping them in line, nabbing 170 lawbreakers during a trial this year in Shanghai.

It's clear that e-bikes have become part of Chinese culture, offering a mix of convenience and eco-friendly transportation that the burgeoning middle class is embracing. While April's new rules are just the beginning of regulation for e-bikes, these are steps toward making streets safer for locals and tourists alike, in the world's most populous country now known as an "e-bike kingdom".