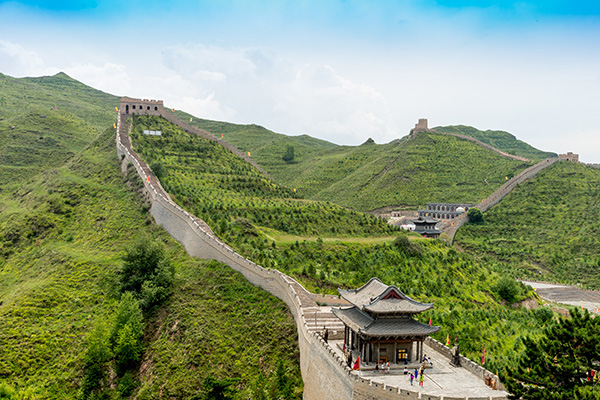 The ancient Yanmen Pass in Shanxi province's Xinzhou city is one of the Great Wall's three outside passes. It can be reached by low-altitude flight services. (Photo: China Daily)

North China's Shanxi province is looking to boost tourism by developing a short-haul flight service and improving its transportation system.

A direct flight linking the city of Lyuliang and the city of Taiyuan, the provincial capital, was launched on April 30. The flight cuts the time of the 200-kilometer journey between the two from three hours by car to just 45 minutes by air.

"Flight tickets are in high demand. Flights in May are almost fully booked," says Yun Peigang, general manager of Lyuliang Dawu Airport. "It is a new way of traveling, introducing short-distance flights between cities in Shanxi and providing breathtaking views for passengers."

Li Ying, a passenger who has already experienced the new air route, says she spent just 28 yuan ($4) on a single trip. "It's even cheaper than a bus ticket, and the scenery was magnificent."

The cost of bus ticket between the two cities is 32 yuan.

Li took a Kodiak 100 aircraft, which can seat seven passengers. The aircraft can take off on a 200-meter-long runway and usually flies at an altitude of 3,600 meters, with a minimum altitude of 600 meters.

"It flew very low, and the mountain view from the plane was as clear as if I was sitting beside the window of my home looking down. It was a completely different experience from flying in a big plane," Li says.

Besides the Taiyuan-Lyuliang air route, at the same time, Shanxi also launched short-haul flights linking Taiyuan to the cities of Datong, Yuncheng and Changzhi.

All the short-distance air routes are operated by light aircraft, with the ticket prices capped at 60 yuan.

Shanxi is a demonstration case for the development of the country's aviation industry.

"China's general-aviation market has not been fully developed. The scope for future market development is huge," Shi says.

Shanxi, dubbed as a sea of coal, expects to boost its tourism industry, as well as combine the cultural and sports industries with the general-aviation industry through short-haul airline business, Shi says.

The province is rich in cultural heritage and tourism resources. It is home to many well-known attractions, such as the Hukou Waterfall on the Yellow River, Taihang Grand Canyon, Yungang Grottoes and Pingyao Ancient City.