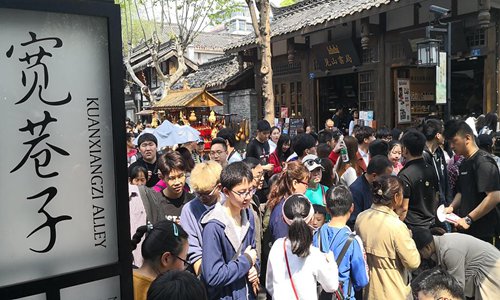 During the holidays, there were 195 million domestic tourists in China, an increase of 13.7 percent from the previous year.

Tourism revenues reached 117.67 billion yuan, marking an increase of 16.1 percent, according to data of the Ministry of Culture and Tourism (MCT).

Of the provinces that have published tourism data, the revenues of 15 provinces each reached 10 billion yuan.

Southwest China's Sichuan Province ranked first, which was the only province with tourism revenues of over 30 billion yuan.

Chengdu, capital of Sichuan Province, has become popular with tourists eager to take pictures of its famous urban landmarks and enjoy hot pot.

The cultural and tourism market has boomed beyond expectation and various measures have been taken to improve the tourist experience locally.

Packages catering to families and postgraduate students have become a hot topic, driving consumption on culture, leisure, catering and rural areas according to MCT.