Sihanoukville eyes a bright future to become ‘Shenzhen of Cambodia’ 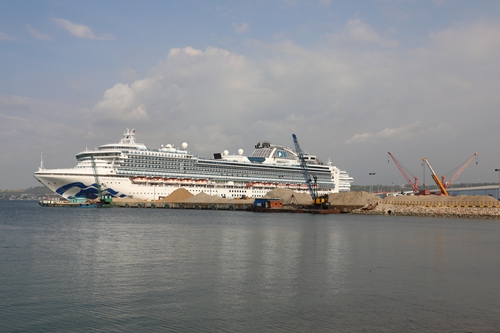 After allowing the MS Westerdam and its 2,000 passengers and crew to dock at its port in February, Sihanoukville, a quiet and small port city in Cambodia has commanded the global spotlight.

Aside from offering a safe departure for those on board, Sihanoukville is in the midst of providing opportunities for its residents and those from the region.

Chinese commerce and investment have brought industrial parks, factories, commercial housing, hotels, restaurants, and casinos as well. The seaside tourist city is gradually changing into an engine of Cambodia's economy.

Over the past five years, some have begun referring to Sihanoukville as a "next Shenzhen." The road to development is not as easy as the city still faces many development problems. But joining the Belt and Road Initiative and enhancing cooperation with China has become the consensus on how to push forward.

Sihanoukville was built around its port and is named after Cambodia's former monarch King Norodom Sihanouk.

Of Cambodia's imports and exports transported by sea, 90 percent go through the Sihanoukville port.

Cambodia's Minister for Public Works and Transport Sun Chanthol said the throughput of the Sihanoukville port could reach 700,000 containers in 2020 and 1 million in 2023, according to a Khmer Daily report.

Sihanoukville has become the second-largest city in Cambodia after Phnom Penh.

The port city has abundant resources for tourism. In the second half of the 20th century, it began attracting international tourists and was listed to be one of the most beautiful beaches in the world.

Sihanoukville's media, government, and civil society have drawn such comparisons.

According to Vongsey Vissoth, Cambodia's Minister of Economy and Finance, under the support of the United Nations Industrial Development Organization, the Urban Planning & Design Institute of Shenzhen is assisting Sihanoukville to morph the city into a "Cambodian Shenzhen" to attract more investment.

Sihanoukville has a very good foundation for further development. However, Cambodia's small population and fledgling market mean Sihanoukville's development is still confronted with a shortage of capital, talent and underdeveloped infrastructure. The Chinese capital has started to help Cambodia leapfrog these obstacles.

An employee with the Chinese Chamber of Commerce in Cambodia told the Global Times more Chinese people came to Sihanoukville around 2015, and the explosive influx began in mid-2017. At the peak of this change, 200,000 Chinese were in Sihanoukville, most of whom lived in the port city.

Sihanoukville hosts a number of new commercial and residential buildings, with many more in construction. It's very hard to find vacant land downtown in Sihanoukville.

Just like Shenzhen, Sihanoukville has developed from a quiet seaport town to a bustling city as more Chinese come with the development of companies and real estate. This trend is accompanied by the rise of the city's service industry with Chinese restaurants and hotels.

Chinese real estate investor groups take up more than half of our rooms every month, said the owner of a local hotel.

In the suburbs of Sihanoukville, especially near the port, there are several industrial parks. Prime Minister of Cambodia Hun Sen announced in November 2019 that four more special economic zones will be built in Sihanoukville, bringing the total to nine.

In recent years, a large number of Chinese enterprises have responded to the country's call to develop alongside the global market. Four of the nine special economic zones in Sihanoukville are built and operated by Chinese companies, and 70 percent of the foreign-funded enterprises in the city are from China.

The special economic zones have introduced nearly 200 enterprises from China, Southeast Asia, Europe, the US, and other countries and regions, with nearly 30,000 jobs. The contribution rate of industrial output to the economy of Sihanoukville Province exceeds 50 percent, statistics indicated.

About 70 percent of households in nearby counties work in the zone earning an average of $3,000 a year, which is 10 times their previous income. The special economic zone is expected to attract 300 more enterprises and provide 80,000-100,000 new jobs.

Chen Jian'gang, a vice president of Sihanoukville Special Economic Zone Corp and Hodo Group, told the Global Times that people are the foundation of society and enterprises must take root locally if they want to achieve healthy and sustainable development.

China and Cambodia enjoy a time-honored traditional friendship, he added. The Cambodian people are very friendly to the Chinese people, which is an important factor for Chinese enterprises to invest in Cambodia.

The Sihanoukville special economic zones have won the support of the people of Sihanoukville through creating jobs, boosting incomes and benefiting the residents by fulfilling its social responsibilities. It has proved the great potential of joint efforts of China and Cambodia within the framework of Belt and Road Initiative, Chen said.

Sihanoukville became an "enclave" of some illegal businesses such as online gambling.

A person in charge of a casino told the Global Times that Sihanoukville has as many as 50,000 to 60,000 gambling practitioners, who are mainly young Chinese. Many buildings under construction that are set to be rented by gambling companies, restaurants and hotels are mainly serving these young gamblers.

Many Sihanoukville residents rent their homes to Chinese, providing a robust source of income, according to a government official in Sihanoukville.

A few years ago, the rent for an office in Sihanoukville was less than $10 per square meter per month, but it has risen to nearly $50, the official said, adding that construction sites in Sihanoukville also pay more than other places, and migrant workers from several neighboring provinces want to work in Sihanoukville.

Gambling is legal in Cambodia, but only in few places including Sihanoukville and Phnom Penh, capital of Cambodia. Sihanoukville reportedly has more than 80 casinos, most of which are owned by Singaporeans, Malaysians, and Cambodians. However, some of the casinos have investments from Chinese people, and most of their customers are Chinese.

There are various online gambling items such as soccer gambling, baccarat, and horse racing in Sihanoukville. Almost all the customers are from the Chinese mainland. Because their servers are placed overseas, it's difficult for the Chinese police to act.

Many illegal but profitable businesses also breed crimes in Sihanoukville. Public safety has become a concern.

Chea Munyrith, director of project and planning, Civil Society Alliance Forum, told the Global Times these crimes tarnished Sihanoukville's image and gave a bad reputation for Chinese people in Cambodia. Chinese enterprises bring benefits to Sihanoukville, but some online gambling companies have brought crimes, which won't do any good for the long-term cooperation between the two countries. On August 18, 2019, Cambodian Prime Minister Hun Sen issued an order to stop issuing licenses for online gambling and make online gambling illegal in Cambodia.

Zhang Yaowu, director of the Cambodian office of the China Foundation for Peace and Development, told the Global Times that after the order, the number of Chinese people in Sihanoukville decreased, which shrank Chinese funds in the city.

Chea Munyrith said that although most Cambodian people applauded the banning order, the gambling business is still an important part of Sihanoukville's economy.

Single industry structure is another challenge in the city as handmade goods still support the business of most factories, which make little profit. Without Shenzhen and powerful support from the city clusters in the Pearl River Delta, Sihanoukville's further development is limited to some extent.

Residents still expect Chinese investment to increase the employment rate and improve their life. A journalist of Thmey Thmey News, told the Global Times most residents did not enjoy the business dividend from the influx of Chinese people, but they had to bear the burden of increasing commodity prices.

"The banning order gives Sihanoukville an opportunity to pause and rethink. It's also a good timing for Chinese social organizations to come in," Zhang said.

"After investment came in, promoting people-to-people communication is necessary," said Zhang. "Sihanoukville should have Chinese organizations to enhance the impression of local people on the Chinese people with tangible projects."

After removing online gambling business, the Cambodian government started to reinforce infrastructure construction in Sihanoukville. In November 2019, Hun Sen participated in launch ceremonies of 34 roads in the city, which are all under construction.

Kuoch Chamroeun, governor of Sihanoukville province, urged more cooperation with China in terms of security management and infrastructure construction, as well as publicizing the efforts.

Chen Jian'gang, the Chinese entrepreneur, believes Sihanoukville's development shouldn't depend on the gambling business but should attach more importance to the substantial economy.

He also suggested that in addition to infrastructure, China can help Sihanoukville in optimizing its city layout and industrial structure to promote the city's development and transition.