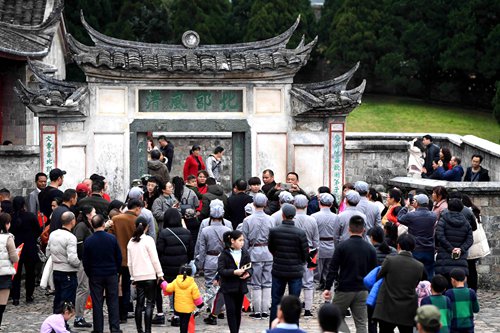 Tourism in China boomed during the three-day Qingming holidays, with so-called "red tourism" sites commemorating the country's revolutionary heroes drawing even bigger crowds of Chinese citizens.During the holiday, China's tourism sector recorded revenue of 47.89 billion yuan ($7.13 billion), up 13.7 percent year-on-year. Online ticket bookings for red tourism (traditional revolutionary sites) registered year-on-year growth of 55.2 percent, according to a statement posted Sunday on the website of the Ministry of Culture and Tourism. "We have been the Communist Party of China's spiritual education base for many years, with special facilities to serve schools and travel agents, and we received hundreds of thousands of visitors every day during the holiday," an employee of the Shaoshan Mao Zedong Memorial Hall in Central China's Hunan Province told the Global Times on Monday. The Qingming holidays drew not only visitors seeking leisure, but also lots of "tomb sweepers" living outside of Hunan who returned to the province to commemorate their ancestors, according to the employee."We tell revolutionary martyrs' stories to our students before Qingming holidays since it represents our tomb-sweeping custom and a proper opportunity to foster patriotism in our students," a primary school teacher surnamed Yan in Chengdu, Southwest China's Sichuan Province, told the Global Times on Monday. "We recommended our students visit red tourism sites with their parents during the Qingming holidays. It's more vivid for them to take a field trip than hear stories in school," Yan added.In addition to recognizing China's revolutionary leaders, citizens paid their respects to the country's fallen soldiers and heroes during the holiday.A total of 27 young firefighters lost their lives in a recent wild fire that broke out in Liangshan Yi Autonomous Prefecture in Sichuan Province. In response to the tragedy, local residents organized memorial services outside of mourning halls and netizens launched online memorial activities to pay their respects."It's a great combination of Chinese traditional values and vacation systems, since the Qingming holidays are about families getting together to remember their dead ancestors, as well as educating children to respect the elder generations," Zhang Lingyun, professor at Beijing International Studies University, told the Global Times on Monday."The red tourism boom perfectly embodies the essential intention of the holidays," Zhang said.