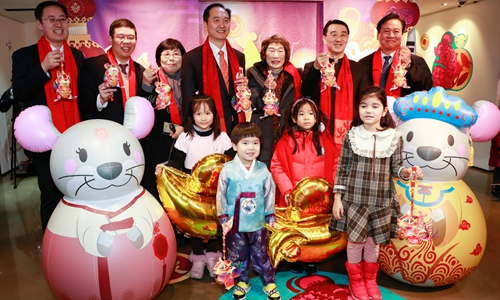 South Korea is among the favorite destinations for Chinese visitors during the upcoming Chinese Spring Festival, with local businesses gearing up to attract Chinese consumption power as bilateral relations warm up, industry observers said on Monday.

For this year's Spring Festival, which kicks off on Saturday, South Korea ranks No.4 among the top 10 hot destinations for Chinese tourists seeking visas, after Singapore, Malaysia and Thailand, according to data that China's leading travel service provider Trip.com Group sent to the Global Times on Monday.

South Korea was among the top 10 foreign travel destinations for Chinese seeking to go shopping in 2019, Trip.com noted.

"I flew to Seoul in early January for a five-day tour with my family and the flight I took was packed with Chinese visitors," a 30-something Beijing resident surnamed Peng told the Global Times on Monday.

Spending by Chinese visitors in the flagship store of Shinsegae in Myeong-dong, the primary shopping district in Seoul, surged 75.9 percent on a yearly basis in January, the report said.

"I traveled between Shenzhen, [South China's Guangdong Province], and several places in South Korea for work reasons in the past three years. According to my observation, Chinese visitors are returning to the country as bilateral relations have warmed up since last year," said Mandy Yang, a white-collar worker based in Shenzhen.

Relations between China and South Korea became strained since the latter and the US jointly announced the decision in 2016 to deploy the US Terminal High Altitude Area Defense (THAAD) System in the southeast region of South Korea.

In 2017, the number of Chinese visitors to South Korea dropped by 4 million, down 48.3 percent year-on-year, the Korea Tourism Organization said, noting the decline caused 5 trillion won ($4.3 billion) in losses to the country's GDP.

Chinese tourists are likely to travel on their own to South Korea, since tour group products have not been resumed, Xu told the Global Times on Monday.

As of the third quarter in 2019, the number of Chinese tourists going to South Korea was about 4.4 million, up 27 percent on a yearly basis. Most of them made their own arrangements,  media reports said.

"Similar cultural backgrounds, diverse shopping resources and K-pop's influence are major factors that attract Chinese to the country," Xu said, expressing a cautiously optimistic attitude about the prospects of Chinese people traveling to South Korea in 2020.

"Tourism is a vital part of bilateral cultural exchanges between China and South Korea, a consensus that was reached by the two countries," he said.

Yang told the Global Times on Monday that Chinese are inclined to shop for luxury goods and cosmetics in particular in South Korea. "It is convenient for Chinese travelers because they can make payments via Alipay and WeChat Pay in duty-free shops in South Korea," she said.